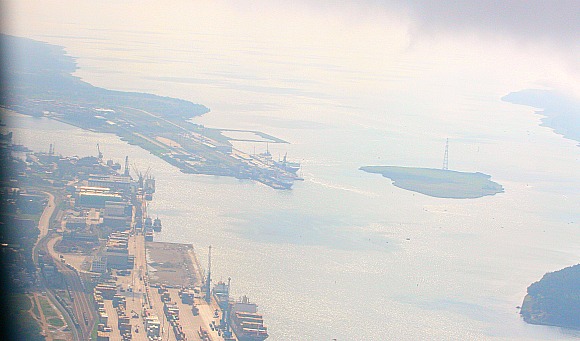 Aurelijos Kripaitės/15min.lt nuotr. / The LNG terminal should be built on the Pig's Back island
Source: BNS
The Municipal Council of Klaipėda endorsed an Environmental Impact Assessment (EIA) report for a liquefied natural gas (LNG) terminal that is planned to be built in the Lithuanian port.

Twenty two members of the council voted in favor on Thursday, five voted against, and two abstained.

Deividas Matulionis, the head of the prime minister's office, underlined that the LNG terminal is one of Lithuania's biggest strategic energy projects.

"I hope that today's decision will open the way for continuing the project," he said during the council's meeting.

The EIA, carried out by Sweco Lietuva, identified a site in the southern part of the port, at the so-called Kiaulės Nugara (Pig's Back) island, as the most suitable location for the LNG terminal.

Planned economic activity during the construction stage of the project would have the biggest negative impact on the environment, but it would be short-lived in many cases, according to the report.

Final decisions regarding the planned economic activity are to be taken by the environmental department of the Klaipėda region, hopefully in September.

The LNG terminal in Klaipėda could become a regional hub, Prime Minister’s Chancellor said on Thursday.

“The idea of a regional terminal was put forward to the European Union (EU) long ago. We are not against the regional terminal, we support this initiative. The regional terminal could be located either in Latvia or in Lithuania. Our terminal could become a regional hub, as could Latvia’s... The Latvians do a lot of talking but they have not done anything specific,” Deividas Matulionis, the head of the Lithuanian government’s office, said during Thursday’s meeting of the municipal council of Klaipėda while discussing a report on the terminal’s environmental impact assessment (EIA).

With Lithuania’s LNG terminal put in operation, the floating gas storage vessel could ship gas to Latvia, he said.

“It [the terminal] is unique – it will be able to both supply gas to our system and sail to Riga or Ventspils to supply gas to Latvia’s system,” the chancellor added.

Rokas Masiulis, the chief executive officer of Klaipėdos Nafta (Klaipėda Oil), the state-run petroleum products terminal operator implementing the LNG terminal’s project, said in late May that the LNG terminal could serve as a regional hub.

Latvia also seeks to build a regional LNG terminal and has invited Lithuania and Estonia to join this project.

Riga believes that the Baltic countries should build the regional LNG terminal, the construction of which could be funded by the EU, in Latvia. Last fall Latvia, Lithuania and Estonia failed to agree on the initiative to build the terminal LNG terminal in Latvia hence the European Commission (EC) has launched an independent study to determine the most suitable location for the facility.

An interim report by the advisors hired by the Commission for a respective study gives preference to Estonia provided that Finland also joins the project.

Lithuania will build its national LNG terminal irrespective of the Commission’s findings. However, the decision of the Commission will affect the funding of this project. The EU could provide financial assistance for a regional hub project.