MEP Olekas: The future of Lithuanian farmers - in the hands of G. Nausėda 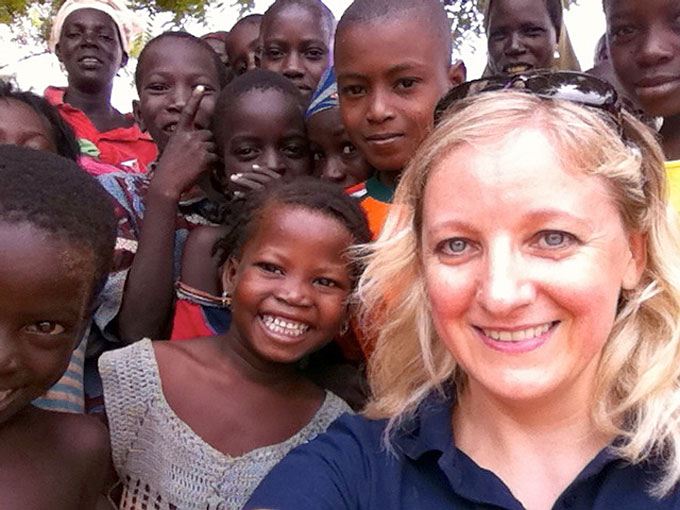 In only a few short weeks, Edita Uksaitė Nichols will board a plain headed for the biggest adventure of her life. Edita will set out to become the first Lithuanian woman to climb to the world's highest peak – Mount Everest. Moreover, she wishes to use her feat to draw attention to Sahel, poverty-stricken zone in Africa, hoping to help.

2013 is a special year for Lithuanian climbers. Twenty years ago, on 10 May 1993, Vladas Vitkauskas became the first Lithuanian to make it to the top of Mount Everest. Moreover, the Lithuanian tricolour was the first of the three Baltic states to crown the Himalayan summit.

When Edita – the only Lithuanian woman to have conquered mountains over 8 kilometres high – was planning her Everest quest, she was not aware it would coincide with the anniversary.

The mountaineer, who has not been living in Lithuania many years, came to Vilnius last year to meet Vladas Vitkauskas, a legend of Lithuanian mountain climbing. Edita says it was a very exciting meeting. She received a word of encouragement and a present – a book by Vitkauskas, “Everest, My Destiny,” complete with the author's personalized wishes.

Having started climbing relatively recently, Edita has already achieved results many could only dream of. She left Lithuania in 1996 and has been on the move ever since. She has spent periods of her life living in France, Canada, the United States, Italy. In Rome, she started working for the UN World Food Programme and has taken part in humanitarian missions in Haiti and Niger. Lately, Edita has been based in Rome, spending much time in Switzerland.

She says it was her sister who inspired her to climb mountains.

“She told me about mountains. For several years, I lived enchanted by her stories. Eventually, I went there myself and saw them for the first time with my own eyes. What I felt was reverential fear. And several years later, I decided climb. My first significant peak was Mount Kilimanjaro in Tanzania. It was an exciting expedition. My team included two women who had already attempted Everest. As we were going up Kilimanjaro, they told me stories that inspired me to go on expeditions. Mt Kilimanjaro was the beginning of my climbing feats. It became an important part of my life. I went to the Himalayas, where I trekked and climbed several peaks including Mera Peak,” Edita told 15min.

Nichols climbed Kilimanjaro (5,895 metres) in 2010. The following year, she conquered several peaks in Nepal and Mont Blanc (4,810) in the Alps. That same year, she climbed the sixth highest peak in the world, Cho Oyu (8,201) in the Himalayas – the first Lithuanian woman to do so.

Last spring, Edita climbed the mountains in Argentina. And in early autumn she once again headed for the Himalayas. This time – for mount Manaslu in Nepal, the eight-highest mountain in the world. Sinister crevasses and regular avalanches also make it one of the four most dangerous peaks in the world.

Support to a poor region in Africa

The Manaslu expedition was part of her preparations for Mount Everest. Edita later admitted it was a taxing experience. She was particularly shocked by an avalanched that buried 12 climbers in a camp a little further up, many others were injured. Despite the tragedy, Edita reached the peak a week later – ahead of other climbers in her group.

Once there, Edita was greeted by her colleagues for becoming the only Lithuanian woman who made it to a peak of over 8 thousand metres twice. All of her group joined her atop Mount Manaslu that same day.

Edita says she chose the mountain as her rehearsal for Everest because it was a quest that required all the strength she could muster.

Edita will be carrying a Lithuanian tricolour as she always does on her trips. She will be dedicating her climb to a campaign called “Everest for Sahel 2013”. She says she wants to draw attention to a serious food crisis that affects millions of families in the region.

“When I was working in Niger, which is in Sahel, the media initially paid much attention to the food crisis. But later the interest abated. I thought that maybe I could draw attention to the situation with my Everest expedition and thus help this crisis-stricken region. Everything could change if people could give a little something to this region. It takes pennies a day to feed families starving here,” Edita says.

In the wake of her Manaslu quest and a visit to Lithuania, Edita returned to her day-to-day work. She says it was sad to bid goodbye to her native country, but her schedule is strictly regulated. She must reconcile her intense preparation for the Everest trip with 10-hour workdays.

“I jog 14-18 kilometres each day. There aren't any gyms in my neighbourhood. So I have to do with whatever's at hand. But when I exercise and jog close to home, there are a few things that disturb me somewhat. Namely, badly-lit streets and really crazy Italian drivers. It seems sometimes that they are deliberately trying to hit people crossing the street,” Edita laughs.

One month before the start of her expedition, Edita posted on her blog that she was very excited.

“This thrill is a mix of emotions.  I have been preparing for this for years. The accents of other 8,000 meter mountains were tough, there is no denying that, but this climb will definitely be the biggest challenge yet and the ultimate test of my mental and physical endurance,” Edita wrote in a post.

Edita's expedition, scheduled to start in early April, could take up to several months. The climber has agreed to share her updates with readers of 15min.

At the moment, the biggest challenge to overcome is financial. Expeditions like that cost a fortune – up to tens of thousands of dollars. The list of Edita's sponsors includes several foreign companies and private benefactors as well as her compatriots.

You can support Edita's Everest quest. To learn more about how you can contribute, press here.