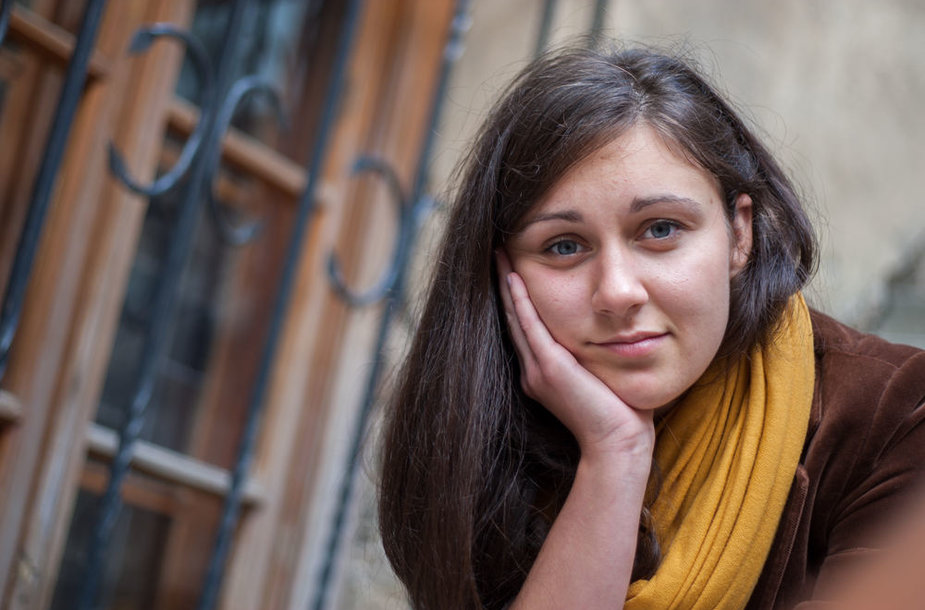 Juliaus Kalinsko/„15min“ nuotr. / Aušra has been living without her mother since she was 10.
Source: 15min
Lithuanians who leave the country in search for a better job often leave behind the dearest thing they have – their kids. Many long-distance parents do all they can to take care of them, yet even materially well-provided minors often feel like they have been abandoned.

15min talked to two kids who stayed in Lithuania after their parents emigrated.

Aušra was merely 10 when her mum left to work in Germany for the first time. With her father absent, the girl moved in at her grandmother's in Marijampolė. Her mother returned two years later, but not for long – she departed again within a year. This time, not only to make money, but also to kick alcohol addiction. Aušra turned 13 that year.

Monika was left alone in Lithuania when she was 15. Her parents received a good job offer  abroad, but the girl did not want to leave home and school. Left on her own, Monika did not miss parents much – a thought would sometimes cross her mind that it would be even better if they were not calling every day.

It has been 11 years since Aušra has been living without her mother. The 21-year-old got used to taking care of herself early in her life, yet her childhood, she feels, was tough. “While living with my grandma, I kept longing to see my mother. I was a small kid who missed her mum very much. When she left for the second time, I moved to Vilnius, to live with my aunt,” Aušra recalls.

“At first, it was wonderful with my aunt. She let me join many after-school activities, to travel, to do what I liked. I stopped thinking about mum – I was very happy. You can imagine what my life had been with her – she would often drink and was unemployed.”

The idyll eventually came to an end, however. When Aušra turned 16, she realized that she was but a guest at her aunt's: “Mum was on very bad terms with my aunt, who would always voice her reproves to me about what my mother did. I started feeling unwelcome.”

Daily quarrels grew in intensity. “I wasn't lacking anything – happiness, activities, money. However, in the long run, it all turned into one continuous misunderstanding – disagreements started, reproaches. I then realized I was alone and this was not my family,” Aušra recollects.

The aunt was unhappy about many things: that Aušra wanted to talk to her mother, that the two resembled each other, even in looks: “I was indeed very much like my mother. So my aunt would tell me on numerous occasions that she couldn't look at me. That hurt.”

Aušra would mostly communicate with her mother on the phone, but not regularly: “Sometimes mother simply disappeared – we wouldn't talk for six months.” Occasionally, they met in person – Aušra would visit her mother or she would come home. She does not any more.

The aunt was very dissatisfied with such trips. “Aunt loudly protested against my communication with mum. It's hard to say why. Was she jealous? She was reluctant to let me go to see my mother, since I'd always return changed. Naturally – my mum is not a responsible person, she was into partying, not taking things seriously. I would probably change to the worse,” Aušra says.

She admits, however, that she can't see her mother as a parent: “I don't think of my mum as a mother – she does not do motherly duties. My mum is my friend to whom I can talk about anything, but she doesn't hold any parent authority for me.”

After turning 17, Aušra decided to live on her own. A fluent French-speaker, she started teaching the language, made some money, and left her aunt's home. “I didn't want to put up with psychological violence at home. I had to prepare for my exams, study. I realized I would not do well under such stress,” Aušra explains her reasons for leaving.

21-year-old Monika, too, has experienced life without parents. However, that seems where the parallel ends – Monika says she did not experience emigration of her parents as a big challenge.

When her father received a good offer to work in Ireland, it was assumed at first that the entire family would move. Monika, too, was getting ready for the departure, when things turned upside down as she was accepted to a prestigious school in Vilnius. 15-year-old Monika had to choose – follow her family or stay on her own. “They didn't abandon me, it was I who stayed here,” she smiles.

Her father left Lithuania first. Upon discovering she was pregnant, Monika's mother joined him half a year later. The girl stayed with her grandparents: “They used to say that it was my parents who were bringing me up, so, according to them, they did not control me. In fact, it was double control.”

Grandparents' control was supplemented by parental care. “I started going to a new school, I found new friends, a boyfriend. Parents continued to control me – they would allow or forbid me things, I told them everything and hid nothing. They used to call me in the middle of the day and ask me where I was, what I was doing, with whom,” she recalls.

Monika tried joining her parents in Ireland once. She moved there while in the tenth grade, but it did not last long. The girl came back a year later, because she did not like Ireland: “I'm a patriotic daughter who will not go there.”

However, neither did she want to live with her grandparents after the return. She stayed alone in a big house, supervised by an uncle. But as soon as Monika turned 18, she declared: She did not need anyone's supervision, she could and wanted to take care of herself.

Monika does not share many details about her life alone, only saying it is not as difficult as it might seem at first – and she has always knew how to take care of herself: “I've always been a self-sufficient kid, so I didn't experience any problems in doing housework and the like – the biggest inconvenience was that I didn't have anyone to come and pick me up from town in the evening.”

Psychological problems are also something that never even crossed Monika's mind – even though her parents were thousands of kilometres away, she always felt their care: “I talked to my parents a lot. I sometimes even thought I preferred if we talked less – they would call me every day. Later, conversations became less frequent. For the last three years we've been calling each other only twice a week. Sure, we continue writing emails.”

Monika thinks that the change in their communication pattern has less to do with her parents being away. “I think our rapport changed naturally, not because of emigration. I grew, went through adolescence, changed. Sure, we might have grown a little apart – I didn't always have much to tell them,” she admits.

Monika is convinced that her parents' emigration helped her mature faster: “It was sometimes funny listening to my peers' problems – they were complaining how parents made them do housework, clean up their mess. I had to scrub toilets, floors, do laundry every week – the entire house was in my responsibility. After all, I was cleaning it for myself.”

The girl's classmates regarded her with respect – she was the only person in the class who lived alone. But that was not the only thing that surprised Monika's peers: “I used to tell my friends how difficult a time I had when my parents returned – I was, after all, used to living alone, being self-sustained. Everything would change when they returned.”

Neither the Lithuanian Statistics Department, the Migration Department, nor the Residents' Register Service compile data on the number of minors in the country whose parents have emigrated abroad.

According to the State Child Rights Protection and Adoption Service, in 2011, there were 2,026 kids (1,044 girls and 1,022 boys) under state custody because their parents were living abroad.

2004 to 2009, sixteen thousand people on average emigrated from Lithuania each year. In 2010, the number jumped up dramatically – 83 thousand migrants declared departure from the country. 77 percent of all migrants are between 15 and 44 years old. In general, this age group accounts for only 43 percent of the total population.

According to another poll, 62.8 percent of Lithuanians think that children should accompany their migrating parents, while 22.8 claim it depends on whether there is someone to take care of them in Lithuania, and 7.8 percent insist that children must stay and be brought up in Lithuania.

According to Spinter tyrimai, supporters of the children accompanying their parents option are more often female and younger (26 to 35) respondents, residents of smaller towns and rural areas. Male respondents, residents of urban centres, groups on the extreme ends of the age scale more often think that children can stay in Lithuania if there is someone to take care of them.