US historian Timothy Snyder: Society, not courts, should fight Nazis and Stalinists 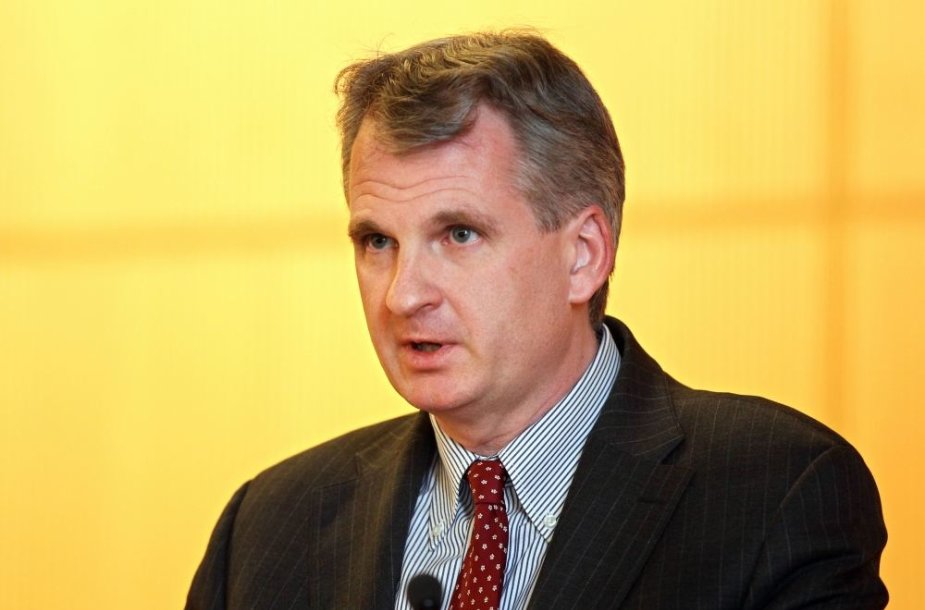 AFP/„Scanpix“ nuotr. / Timothy Snyderis
Source: BNS
US professor Timothy Snyder, who specializes in the history of Central and Eastern Europe, has said in Vilnius that open societies should rely on argumentation, not courts, in their efforts to fight people who deny crimes committed by Nazi and Soviet regimes.

liberalism has to have energy and self-confidence to win arguments against Nazis or, for that matter, against Stalinists.

Snyder, professor at Yale University, said in an interview to BNS that the history of the Baltic states, Poland, Ukraine, and western Russia was not understood well enough. He tries to tackle the topic in his new book "Bloodlands."

During his visit in Vilnius and Kaunas at an invitation from the Polish Institute, Snyder said Lithuanians should have thought twice before deciding to rebury the leader of its provisional 1941 government, Juozas Ambrazevičius-Brazaitis.

- Do you think the history of the territory that you call Bloodlands is well understood both in these countries and abroad?

- No. I think everyone has a part of it but no one has all of it. In the West - you can say - they don't understand anything about Eastern Europe and that is largely true, although they do understand certain things like the Holocaust, which I am treating as an Eastern European event.

When we look at these crimes, we either look from the point of view of what happened to my nation or sometimes we think - what the Nazis did or what the Soviets did. The book attempts to bring all of these crimes in a certain time and place and to look for their relationships to each other, which is not something that you would ordinarily do, even if you are interested in national suffering or in ideological differences.

- Lithuanian officials often say the West do not understand Soviet terror, while in the West Lithuania is sometimes criticized for neglecting the history of Lithuanian Jews. Do you agree?

The West doesn't know nearly as much as it should about Stalinist occupations. It is also true that Lithuania should probably do more to investigate the behavior of its own citizens towards its own citizens during World War II.

- The book is certainly not about trying to show who knows the least. What you just said, in some sense, everybody is right. And these two things don't cancel each other out. It's true - the West doesn't know nearly as much as it should about Stalinist occupations of Lithuania. It's also true that Lithuania should probably do more to investigate the behavior of its own citizens towards its own citizens during World War II, during both occupations.

- There is a controversy in Lithuania surrounding the reburial of Juozas Brazaitis, leader of the provisional government, with the support of the government. Do you think it's a right thing to do?

- I am gonna choose my words very carefully here. I think before you rebury anyone, you should think very very hard and probably wait a very very long time because once you rebury somebody once, you can't rebury them again.

- Do you think the role of Lithuania's provisional government is well understood, or should there be more research?

- I don't personally think it is very well-understood in Lithuania. From what Lithuanians say to me, I don't have the impression that Lithuanians themselves know everything that they perhaps ought to know about the Lithuanian national front and the Lithuanian provisional government. That's what I meant when I said that before you rebury someone, you should probably make sure that you take enough time to make the decision.

- How important is understanding of history, historical grievances to today's relations in the region? Does it play a role in the tensions between Lithuania and Poland?

- I think it's not so much history as the choice to make historical conflicts present in current discussions. It's one thing that Poles want to spell their names with w instead of v. It's another thing that Zeligowski occupied Vilnius in 1920. To my mind, those are two rather different things. I have the impression that some Lithuanian politicians are pushing them a little bit too closely together.

What I am trying to say is that history doesn't necessarily make us do things. We can choose what references to history we make. In this particular situation, the concern would be that what is a fairly practical small-scale issue is treated as a historical matter and hostility between Poland and Lithuania, which has a difficult 700-year-long history. We are perhaps giving it a certain grandeur and almost permanence that the issue in question - how to spell names - doesn't really require.

It's one thing that Poles want to spell their names with w instead of v. It's another thing that Zeligowski occupied Vilnius in 1920. To my mind, those are two rather different things.

- Do you think there could be a chance for Lithuanian and Polish historians to write a joint textbook? There have been such efforts but they dragged on.

- Efforts like that are valuable because historians get to know each other, they come to understand what the other side is arguing. I think it's very hard to produce a good bi-national textbook and it tends to be boring because it's a compromise.

What not just Poland and Lithuania need but what Europe needs in general are textbooks for children, which are not national, or even bi- or tri-national, but which are European, regional. Because even if you succeed with a Polish-Lithuanian textbook, you are still left with questions - what about the Lithuanian-Belorussian relations, Lithuanian-Jewish relations, Polish-Ukrainian relations.

The way forward has to be instead to think of European frameworks and write themathic histories, themes that bring in various national histories. I think that's even harder.

- Lithuanians are worried about Russia's history policy, some speak of an emerging neoimperialism. Do you think it should be a point of concern?

- From the point of view of any country, there has to be a healthy balance between free internal discussion of history and the way we talk about history abroad. I don't think it's healthy to try to control discussions of history at home and then have memory policy directed at your neighbors, which is the situation that we have in Russia.

It's normal and inevitable that we talk about history, but I think these things work much better when there isn't an official Russian position but rather lots of Russian historians doing lots of different things, perhaps talking with Polish, Israeli, American historians.

It is a problem when states have official historical positions because these positions are usually wrong in some fundamental ways and because no position on national history can ever be acceptable to neighbors.

Liberalism has to have energy and self-confidence to win arguments against Nazis or, for that matter, against Stalinists.

What happens with high politics is that national positions are known to be unacceptable and therefore they are insisted upon. The only way to do this politically is to find some language which isn't a national language. That's not exactly how Russia has proceeded.

- What is your opinion on the decision by the EU to ban denial of Nazi crimes and subsequent efforts by Eastern European countries to seek a ban on denial of communist crimes?

- I think the question answers itself. I think that open liberal societies have to have the confidence in themselves to win arguments, that liberalism has to have energy and self-confidence to win arguments against Nazis or, for that matter, against Stalinists.

I am against banning expressions of political views because I think those arguments have to be won, have to be won every day. And you can't win them by just banning the opposition. The practical problem you have already mentioned, which is that if I ban x in my country, how can I exactly prevent you from banning y in your country, and then someone else say "well, I would like to ban z in my country", where everyone demands certain respect for something.

Of course, what the Nazis did in Europe and the Holocaust in particular was an unprecedented crime. And I can understand historically why German law is the way that it is. But I think that in general, if you want to defend open societies, we have to defend them arguing all the time rather than by banning things.