Brussels is not considering the possibility to suggest introducing a pan-EU ban on controversial shale gas but has called on member states to continue focusing on renewable energy resources, European Commissioner for Environment Janez Potočnik says.
Source: BNS 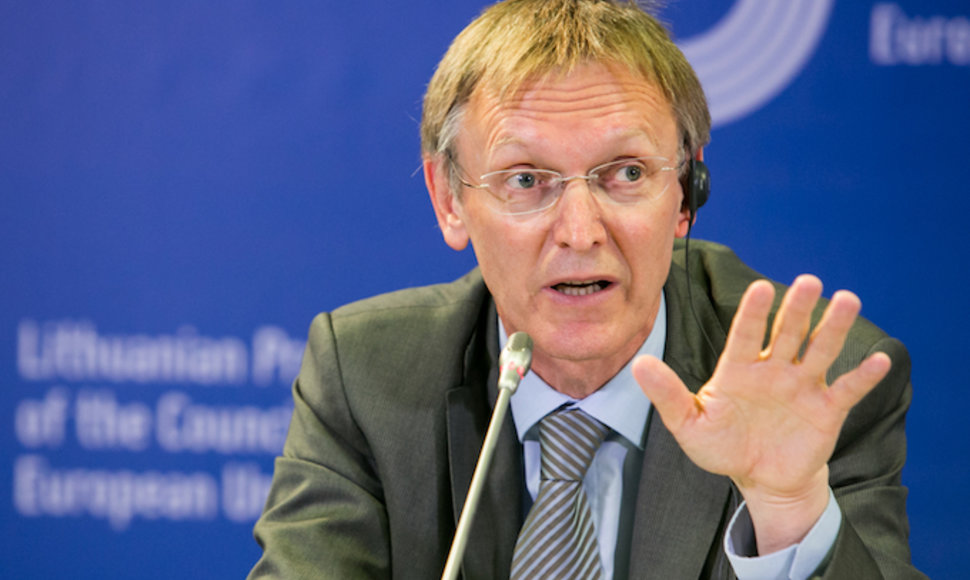 In an interview with BNS following a discussion with EU environment ministers in Vilnius, the commissioner said that the European Commission would present a proposal on ways to ensure environmental standards during shale gas exploitation but the scope of regulation was not decided yet.

- During the discussion in Vilnius, did you see political will of member states for new legislation on shale gas exploration and exploitation?

- Some are clearly not yet decided but many would like that the Commission continue analyzing the necessary steps how best to address the question of environmental security and health security in the context of shale gas exploration. That was mentioned by many. We will, of course, continue with the activity which we have in the Commission, and when we make up our mind, we will come up with the proposal.

- You've said the proposal would come this year. When will it be clear what kind of proposal it will be - new legislation or guidelines?

- It will be clearer after the impact assessment decision is made - but more closer to the end of the year. August is the month when we normally take the vacation. If the proposal is this year, it means that in the course of next few months this decision should be made.

- The Commission says it will not interfere with individual decisions of member states on their energy mix. Does this mean that the idea of EU-wide ban on fracking technology is out of the question?

- We are not discussing that. We are discussing conditions which should be set in a way that such predictability would be achieved which would secure human health and also protect environment. That's basically what is on our agenda. So we don't talk about banning fracking on the EU level. Our goal is to create conditions in which we would believe that this is done in a safe and secure way.

- French President François Hollande said that he would keep a ban on shale gas exploration because the technique used to extract shale gas presented too many risks to groundwater and that we can already see some negative consequences in the United States. Do you agree with this assertion?

- There are different geographical and different political situations and evaluations of the problem, and that's absolutely something which should in the context of that judgment be done by member states – respected.

- The Lithuanian government is yet to decide whether to allow Chevron explore shale gas in west Lithuania. Do you think the government should wait for your proposal before making the decision?

- There are different things when you talk about exploration and exploitation. According to my understanding, you are still quite far from commercial exploitation.

Of course, we hurry because we do believe that if it comes to the exploration phase, which would be of a bigger scope, this could also have environmental consequences. But on the other hand, we currently already have environmental legislation which in this context should be respected. We are not starting from scratch.

This came with two simple conclusions. One was that concerning the effect on the environment, you cannot compare the exploitation of conventional and unconventional gas, that's why we need to put special attention on unconventional. The second was that we analyzed the existing legislation which, we found, is applicable to any economic activity that we are doing today in Europe but that there are some serious legislative gaps which we need to address.

- So the new proposal will concern only exploitation, or will it include regulation for exploration as well?

- We are working on that, that anything which would have consequences on environment would be, of course, taken into account. Because that's the leading motive which we always have. The leading motive is addressing any economic activity which has side effect consequences on environment and human health. So, basically, it is clear that if one goes with exploration of huge extent, this would likely have consequences on the environment. But it is clear that we are hurrying up because our main issue is, of course, exploitation. That's the real question of the real economic activity which we would like to address.

- Do you see now any lessons that Europe could learn from the US?

- Sure. We are in constant contact with partners in the US. You can learn on two sides. On the one side, you can learn from the point of view that this changed their energy composition and the whole energy game in the United States - (though) there are still questions how long-term this is, how the prices will evolve in the future.

But on the other hand, their activity revealed that there are quite a lot of consequences which are connected with environmental preservation and human health, which need to be properly addressed. So, obviously, that when you have somebody with such experience you can learn from, it would not be smart not to learn from that experience.

- In Lithuania, critics who say that shale gas should be banned because of environmental reasons are often accused of speaking in favor of Gazprom, the sole gas supplier to Lithuania. Are debates in the EU affected by Russian lobbying?

- Basically, lobbying is a fact of life but I don't care about lobbying. I'm here because I am a responsible politician who has to prepare proper answers to things for which I'm paid and responsible for. And this is something on which we are working.

When we look to the questions like shale gas and also other potential developments of energy in the future, we have to be aware that we have decided on some of our orientations for the future already in the past. First, we think that climate change is a reality, so we have to deal with climate change.

We have already agreed about our 20/20/20 targets, which is a 20 percent reduction in CO2 emissions, 20 percent renewables, an a 20 percent increase in energy efficiency. Then, the next question also in the context of the developments will be going with climate summits, starting with Warsaw and then with Paris, we need to, of course, have, and we are having in the Commission, serious debates what the next steps are.

What about 2030 because 2020 is actually the beginning of the fight against climate change? We hope, of course, that the international community will be in the position to join also so we would have after 2015 a joint commitment to fight climate change.

But I think that if you are serious, if you are serious about the effect that we want to tackle climate change, then, of course, we have to seriously discuss what are the next steps in 2030, 2040, 2050. Because when we were preparing this document, which was looking a bit more in the longer term of 2050, I remember that figures were mentioned that if we want to stay inside the 2 percent degree increase, that would ask from us a 80 to 95 percent reduction (of CO2 emissions) by 2050. So, it will not happen suddenly from 20 in 2020 to 80 percent in 2050.

So we need to be clear of the next steps and I think we started with the longer term policy of support of renewables, which, I believe, we should still keep our attention on that. And shale gas - it obviously has less consequences than, for example, if you continue with exploitation of coal. But it's still a fossil fuel also, I think that is obvious.

I think in those contexts, while discussing the future of our energy, climate and, of course, energy security, all those issues are also an important part of the discussion, but we should keep in mind that we keep this strategic orientation on which we have agreed already in Europe. And we do not lose sight of those directions which we have jointly agreed. I think that's an important part of the debate also which we are focused on.