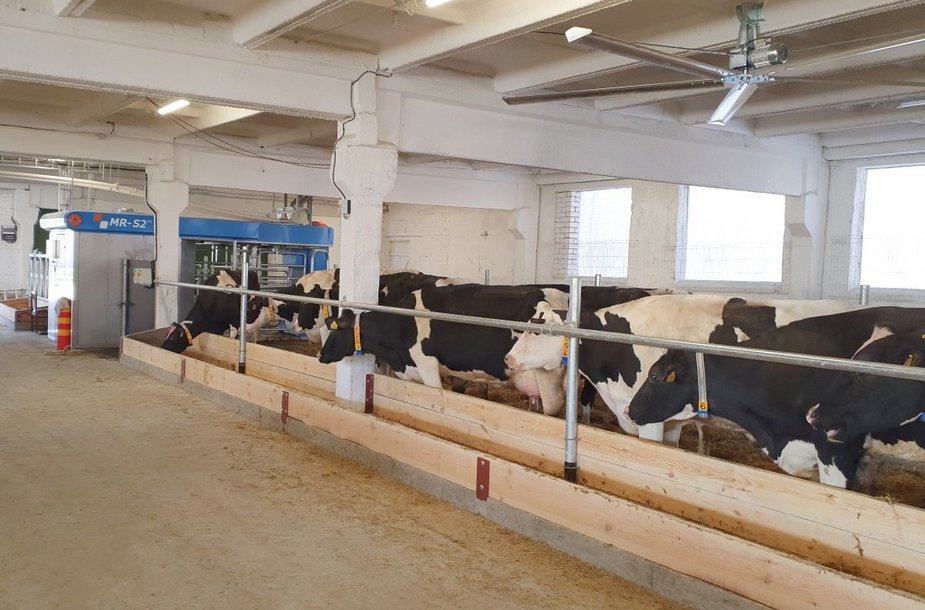 News robots for the cows' well being at Labunava
Source: 15min
An important stage of modernization has been completed in Labūnava agricultural company located in Kėdainiai district, while the new investments of hundreds of thousands are planned for the renewal of farms and advanced technologies that will ensure the highest animal welfare standards.

The renovation of the second cowshed of ‘Labūnava’, which belongs to AB Linas Agro Group, was completed a month ago - it was equipped with two modern milking robots from a Dutch manufacturer. The company has invested more than 345,000 euros in this project. Moreover, the company will invest another 420,000 euros in the renovation and robotization of the third cowshed later this year. New technologies are expected to pay off in the next 4.5–5 years.

"The investment has proven to be a success, therefore, we plan to renovate another farm building by late autumn and install smart milking robots as well as modern water beds for cows. The renovation is planned to start in May", says Simonas Greičius, the director of the Labūnava agricultural company. 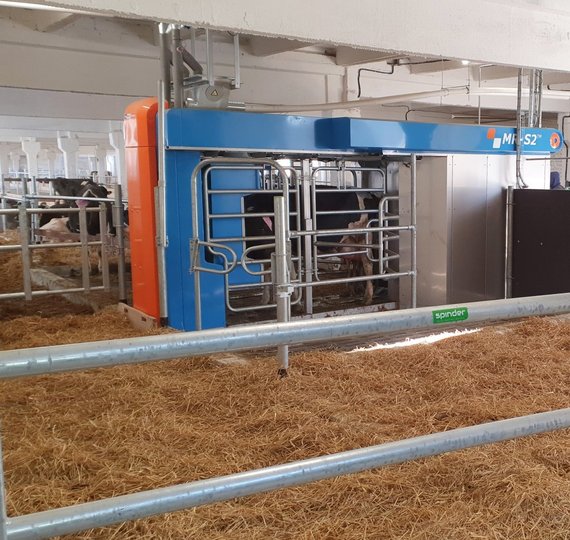 "Labūnava was the first agro-enterprise in the Baltic States to invest in smart "BouMatic" milking robots last year. The firm is planning to make a switch to an automated milking system by employing 10 robots by 2025, as well as to increase the kept herd of cows to 650–670. Currently, the company keeps 538 dairy cows, and the two repaired and renovated farms are equipped with 4 robots, supervising 210 animals in total.

Productivity and milk quality have increased

"In the past, you could say that our work was very primitive - cows were tied up, as was the case in many similar farms. Now, in the renovated barns, the cows have complete freedom of movement and can go to the robot’s milking area to be milked whenever they want, even in the middle of the night. Up until now, we did control tests on milk once a month, so decisions often had to be made based on intuition alone. However, since installing the first robots we saw an improvement in the quantity and quality of milk", says Simonas Greičius. 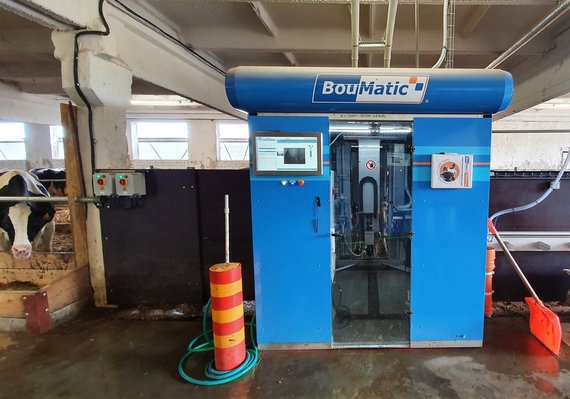 The robots record how many times a day each cow has been milked, what is its rumination time, animal activities, quantity and conductivity of milk, and when the on-heat period started. This data helps specialists to identify whether a cow is at risk of mastitis, has an increased stomach acidity, or other diseases which could be prevented. Also, the robots select the amount and composition of the compound feed for each cow, taking into account its health status, the number of lactation days, and milk yield.

The introduction of digital milking technologies increased productivity levels, too. On average, robots milk the cows 2.5 times a day. One robot serves 50 to 55 cows and fulfills a task that previously required 3 people. "Before robotization, the company had 44 employees, now we have 33. After the renovation of the third cowshed, we will require only 29 specialists for maintenance of the dairy farm", says Simonas Greičius.

Due to smart technologies, the feed is used more economically and improves the quality of milk. The robots separate cows that have been diagnosed with inflammation or those that are on heat. Such cattle are directed to a separate pen, where they are immediately taken care of by veterinarians.

Currently, the average milk yield at Labūnava agricultural company reaches 9,900 kilograms per cow annually. "The best dairy farms in Lithuania, such as Lukšiai agricultural company, located in Šakiai district, also owned by Linas Agro Group, reach an average of more than 13,000 kilograms. However, our goal is different - to reach the top quality milk with higher protein and fat content rather than the maximum yield. We hope that within a year the animals will be fully accustomed to the new technologies and the average annual milk yield per cow will reach 11,000 kilograms", notes S. Greičius. 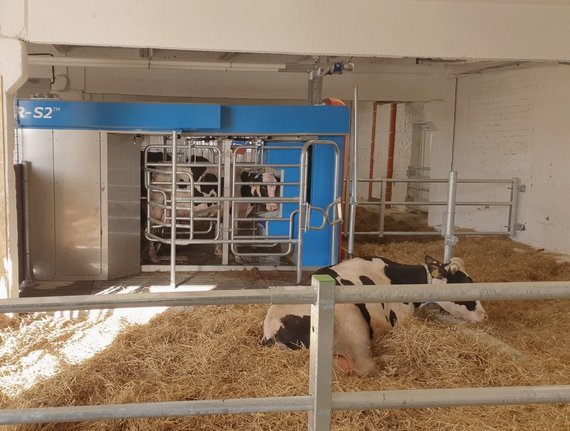 Additionally, the company plans to update the herd gene pool within the next 3 years. Bulls are already being selected for breeding, the offspring of which would be the most suitable for keeping on a robotized farm. "When planning the future of the farm, we must invest not only in technology but also in the renewal of the herd", added the director of Labūnava.

The cows will live like in a luxury hotel

Currently, the animals in both the renovated barns and those still awaiting modernization are kept on straw litter, but supplying all 5 barns with quality straw is challenging. Sometimes there is not enough straw, while its quality depends on the weather during the harvest.

"Alongside 2 milking robots, we decided to install water beds for 106 animals in the third farm. It will provide warmth during the cold season and keep them cool in the summer. It is one of the most advanced technologies, reminiscent of a simple mattress, which is laid on a concrete floor, fixed and filled with water. In such water beds, the cows seem to float. Their weight is evenly distributed and it protects the animals’ feet from rubbing, providing even greater comfort, healthier, cleaner and, most importantly, dry living conditions. Thus, after the renovation, the third farm will become one of the most advanced and modern. The cows will live in barns like in a luxury hotel’, says the head of the company S.Greičius.

The curiosity of cows helped to adopt new technology

At first, the robotization process was full of challenges. "Both us and the animals looked at new technologies skeptically and scared. We didn't know what to do and how to force cows to go to the milking place", remembers Simonas Greičius. According to him, the curiosity of the cows is what made the robotization of the farm possible: "Cows are extremely curious animals - if they find the smallest gap, they try to pass through it. Sometimes when they find the door open, they even come to the employees’ offices".

It took about a month for the first 100 cows to fully get used to the new technology. After setting up the second farm, cow ‘experts’ were used to help the newcomers.

“After setting up a second farm from a herd that already knows how milking robots work, we brought in 50 cows “mentors” for a week and housed them with cows that had not yet seen the robots. This way, the experienced cows showed the newcomers an example of how to behave and how to enter the milking zone, which made the second stage way easier", says S. Greičius.

Some cows have accustomed to new technologies even try to trick the robots to get delicious granular feed. "Some cows constantly walk to milking area simply because they want to get something delicious, but the robot recognizes them and drives out", explains S.Greičius.

The Kėdainiai district-based Labūnava agricultural company, which belongs to the agricultural and food industry investment company AB Linas Agro Group, is engaged in crop and dairy farming. It grows about fourteen thousand tonnes of grain per year, milks 5,700 tonnes of milk, and sells about 400 tonnes of live-weight meat. The company’s annual revenue exceeds 5 million Euros and it currently has 73 employees.