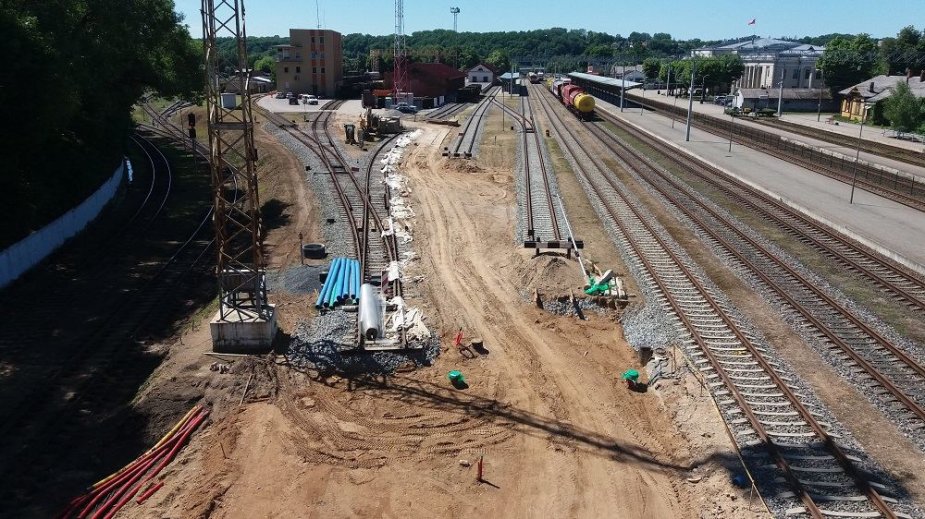 According to Ireneusz Merchel, the board chairman of the Polish national rail infrastructure managing PKP Polskie Linie Kolejowe S.A., Poland has currently completed a 66 kilometre stretch of rail from Warsaw to Sadowne, where the old railway was reconstructed to allow high-speed train traffic. This comprises 20% of the entire Rail Baltica railway stretch in the country.

“Work has been completed on the stretch Warsaw-Sadowne. Currently, we are performing contracting Work in the 36 kilometre stretch from Sadowne to Czyżew. We have also selected a contractor to modernise the 71 kilometre Rail Baltica stretch from Czyżew to Bialystok. The project is proceeding smoothly and on schedule – Poland is actively progressing toward Lithuania in the Rail Baltica project,” I. Merchel informed.

Based on the ongoing project, other than the two aforementioned Rail Baltica stretches in Poland, the country will have another two stretches of rail left to implement: Bialystok-Elk (100km) and Elk – Polish-Lithuanian state border (94km).

It is planned for all Rail Baltic work to be completed in Poland by 2027.

“We understand well the importance of the international railway line Rail Baltic and it is one of our priorities in the country’s transport infrastructure. When this line is completed, Poland’s transport links not only to the Baltic States, but also the Scandinavian countries will improve, opening yet another line for freight transport to Northern and Eastern countries, thus making it an important project for us,” I. Merchel said.

Adapting to new requirements for high-speed trains, Lithuania will modernise by 2026 the railway from Kaunas to the Polish border, allowing passenger trains to reach speeds of 249 km/h and freight trains – up to 120 km/h, like the rest of the Rail Baltica line.

It is planned that a trip from Kaunas to Warsaw on Rail Baltica will take passengers under five hours and from the Polish capital, it will be possible to reach practically all major Western European cities.

Important not only for passengers, but also freight

The Rail Baltica project had already proven its significance during emergency situations, when on March 17-18 this year, special transit passenger trains were organised. Thanks to this train, Baltic States citizens stuck abroad due to the coronavirus pandemic were able to return to Lithuania from Germany via Poland.

According to Lietuvos Geležinkelių Infrastruktūra director-general Karolis Sankovski, the Kaunas railway hub is one of the most complex rail infrastructures in Rail Baltica and one of the most important Lithuanian logistics centres – freight traffic from North, West and Central Europe will converge here, it will also have transit freight from the East and Klaipėda Seaport passing as well.

“Already now, through Kaunas, we have freight trains from China travelling to Western Europe, the Kaunas intermodal terminal is used by logistics companies as a connection in transporting freight by rail, road, air and sea. We have no doubt that upon concluding Work at the Kaunas railway hub, when the Kaunas intermodal terminal is linked with European rail to Poland and through it – to Western European rail networks, its significance will increase even further,” K. Sankovski notes.

Intermodal transportation is freight transport by two or more methods of transport, for example, train, truck and ship or ferry. For the convenience of freight transport, such shipments are usually performed by loading goods to containers and changing the means of transportation by moving containers from one means to another. In Lithuania’s case, any freight shipment by rail from East to West and vice versa becomes intermodal because cargo must be swapped from one type of carriage to another.

Kaunas – a centre of logistics

It is planned to fully integrate the Kaunas intermodal terminal into European rail infrastructure by the end of this year so that in 2021, cargo trains could travel between Asian and European countries, reloading and distributing freight in Kaunas.

Lithuania completed the first stage of the Rail Baltica project in 2015 – a European gauge railway line was laid down from the Polish-Lithuanian border to Kaunas railway station. During this stage, 123km of European standard international railway was laid down, which sees regular passenger train traffic between Kaunas and Bialystok now. In the future, this stretch will be modernised so that passenger trains could, just like on the rest of Rail Baltica, travel at a maximum speed of 249 km/h.

After connecting the European gauge rail to the Kaunas intermodal terminal in Palemonas, the terminal will be the most distant point in Eastern Europe to be connected to 1435mm gauge rail. Further on to Latvia and Belarus, there will be a wide standard 1520mm gauge rail, thus Kaunas will be the only location to allow rapid reloading of rail wagons.

To ensure that the Kaunas intermodal terminal would be convenient not only geographically, but would also perform all necessary extra functions, currently, intensive development is ongoing of the terminal’s infrastructure and range of potential services. It is planned that it will be possible to quickly perform all customs and veterinary, as well as phytosanitary procedures remotely, also not only reload containers from one standard of wagons to another but also to reload, load and unload containers themselves, load lumber, as well as granular and other non-standard cargo.

PKP Polskie Linie Kolejowe S.A. board chairman I. Merchel emphasises that in implementing the Rail Baltica project, not only every participating country’s involvement at the national level is essential, but also seeking new cooperation opportunities between countries.

As an example, he points out the plans of two countries’ rail cargo companies PKP Cargo and LG Cargo to establish a joint venture, which will offer intermodal transportation between Lithuania and Poland.

Egidijus Lazauskas, LG Cargo director-general, notes that the scales of intermodal cargo transport have been growing in recent years and business interest in this method of cargo transportation has significantly increased.

“We are aiming to develop intermodal cargo transportation alongside PKP Cargo between Lithuania and Poland. Such means of cargo transportation, when several methods of transport are combined, saves not only on logistics spending but also reduces pollution, traffic congestion, noise, traffic accidents, as well as other negative impacts of road transportation on the environment,” E. Lazauskas says.

According to E. Lazauskas, when developing services, there will be significant attention on semi-trailer and container transportation and railways will connect Lithuanian, Polish and German loading terminals.

The Kaunas intermodal terminal was built at the Palemonas railway station next to the main Lithuanian highway Vilnius-Kaunas-Klaipėda and the Via Baltica highway. Logistics companies are settling in the vicinity, furthermore, the Kaunas Free Economic Zone is established nearby, there are convenient connections to Kaunas Airport and Klaipėda Seaport.

Rail Baltica progress: from Kaunas toward Latvia and Poland