Creditinfo opens possibility for citizens to check their credit ratings

Libyan revolutionary activist Lamia Abusedra two years after Muamar Kadhafi's fall: “The only option we have is to be optimistic” 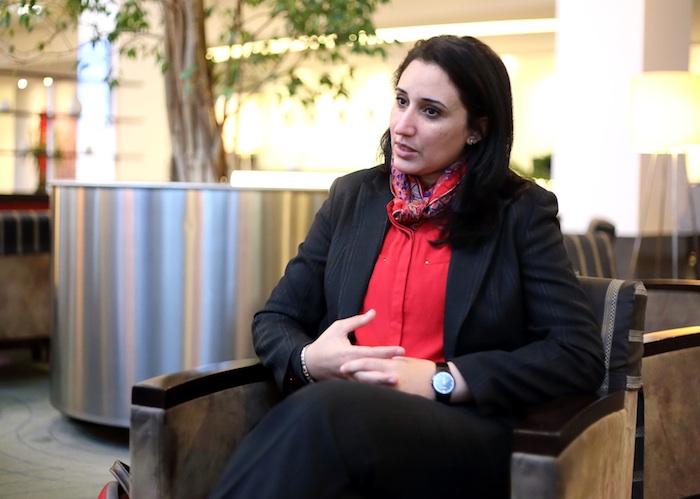 “Optimism is our only option. We just need to be patient and understand that it's not an easy road, and work together on understanding what it means to be Libyan, what it means to live as the Libyan nation,” two years after the overthrow of Libya's dictator Muamar Kadhafi says Lamia Abusedra who has thrown her lot with the revolution from the very beginning. Previously a university professor, she is now a vice-minister at the Ministry of Information.

She tells 15min.lt about life “before the 17 February,” as the start of the Libyan revolution has come to be known, as well as the events that shook the country and the processes that followed.

Abusedra came to Vilnius to a European Platform of Regulatory Authorities (EPRA) conference. Libya has yet to establish such an authority, but the country was granted an observer status in the organization during the conference.

German broadcaster Deutsche Welle is currently working on a European Commission project aimed at helping develop the Libyan media. The two-and-a-half-year project should be launched soon.

Two years ago, Libya was all over the front pages of print newspapers and home pages of online media. Now, it takes some thought to recall the latest news from the country in North Africa. Earlier this month, armed men assailed the embassy of Russia in Tripoli, the capital of Libya.

Several days later, fifteen Libyan soldiers were killed during an ambush of a military checkpoint. And on Thursday morning, a group of armed assailants kidnapped Libyan Prime Minister Ali Zeidan. He was released several hours later.

“We were everywhere in the news because of the revolution that happened in Libya. It was a very strong period of our history. Everyone who was on the ground was involved in one way or another. Such an event in a history of a country is crucial, it would affect every person involved. We have a saying in Libya: pre-17 Feb life and post-17 Feb life. Everything has changed,” Abusedra tells 15min.lt.

According to her, the transition from the pre-17 Feb life to freedom was chaotic but exciting. The situation today, as Abusedra calls it, is a journey of discoveries.

She admits that people had high hopes during the revolution and paid a huge price for a better future. Those who lost an arm, a leg, or a relative demand for change. “It's very understandable that those people feel impatience and are discouraged by the slow progress in our country. This is not a simple institution but a country that has to be rebuilt from scratch. It needs time.

“Sometimes we, Libyans, forget these positive steps that have been made and forget to give ourselves praises for what we have achieved getting rid of the old regime. It definitely was not easy, it was not a simple change of power, it was a violent, very difficult period in our history that will definitely have shadows for time to come. We need to understand that, comprehend it, and work together so that we can take the next steps and have a better future for our country. It needs patience.

“I have a friend who once told me: “The only option we have is to be optimistic.” To be pessimistic is treason to the country. The price has been paid already so there's no going back. The only option is that Libya becomes a better nation.”

Libyans are very concerned about the future and know very well how easy it is to slip back to where they were just several years ago. “The return of a dictatorship after the revolution is not an option in Libya, although we know that sometimes it does happen and people are very aware of that. Everyone is strongly stating that we should work together for that not to happen,” Abusedra assures.

Golden days of the revolution

Abusedra, 39, received a PhD at the University of Exeter and returned to Libya in 2010 to teach. She remembers those several months spent in her home country before the revolution as very dimmed and unsatisfying, even though she herself comes from a well-to-do respected family. People did not feel how suppressed they were, what injustice they experienced as they went about their lives.

“Everything in Libya was kind of dimmed. I had students in university in such a vibrant age. When I came back I was almost screaming at them: Why are you so dimmed?” she recalls.

The revolution in Libya flared up after governments in Tunisia and Egypt had already been overthrown – on 17 February 2011. Within three days, the uprising reached Tripoli. By 27 February, Libya had established the National Transition Council to administer territories under the insurgents' control.

In March, France was the first country to recognize the Council as the legitimate representative of the Libyan people. The last decisive battles had ended by October of that same year. Fighters in the city of Sirte captured and killed Kadhafi, the country's dictator for four decades. Three days later, when Sirte fell, Libya was declared a liberated country. In all, the civil war claimed over 30 thousand lives.

During the first days of the revolution, Abusedra recalls, people hardly understood what was happening. As the government's forces that defended Benghazi fell on 22 February, people cautiously went out into the streets to look around what they could do. Abusedra, her mother, sisters, and neighbours, too, wondered how they could get involved. Abusedra, an IT systems engineer, decided to create a database of people who disappeared, were injured, in hospitals, deprived of homes, or affected by the military actions in any other way. Activists initially envisaged a database of one, maybe several thousand names, but it soon swelled to over 20 thousand people.

“It was such an atmosphere of energy, it was really amazing. And sometimes we remind each other of those days, we call them golden days because it was just magic,” Abusedra recalls. One year later, she became a board member of a Benghazi-based government agency to support NGOs, started heading the International Cooperation Department at the Ministry of Culture.

Her students, too, underwent spectacular transformation – they began passionately discussing and demanding their rights, sometimes crossing the lines. But that was a welcome development, because previously, these young people could hardly understand they had been oppressed. Today, they are eager to be involved and often think it is their duty to defend the country and their community, sometimes without a clear idea against what.

“We are in Libya at that stage – a nation-wide dialogue that is in progress, important state of our history that will shape our future, and hopefully, a bright future that I'm talking about. That's the only option,” she enthuses.

Oil-rich Libya could be among the richest countries in Africa. Abusendra says the country has a huge potential, both financial and social. It has a relatively well-educated population, strong community bonds among people, clear values.