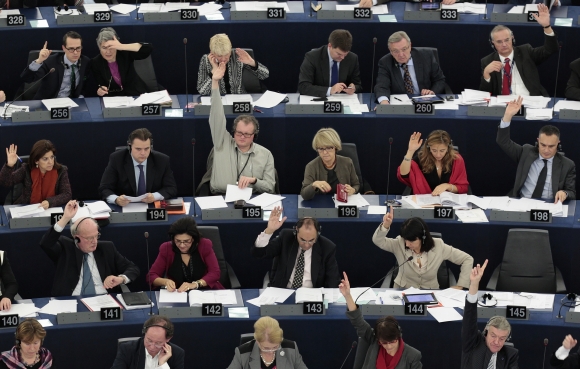 „Reuters“/„Scanpix“ nuotr. / European Parliament
Source: BNS
The European Parliament (EP) passed a resolution on Tuesday, urging Lithuania to consider resuming the investigation into possible operations of CIA prisons on the Lithuanian soil used for detention and imprisonment of suspected terrorists.

In the resolution, the EP called upon "the Lithuanian authorities to honour their commitment to reopen the criminal investigation into Lithuania's involvement in the CIA programme if new information should come to light, in view of new evidence provided by the Eurocontrol data."

MEPs said the new data that came to light show that the airplane "alleged to have transported Abu Zubaydah, did stop in Morocco on Feb. 18, 2005, on its way to Romania and Lithuania." The resolution also refers to a 2006 flight from Lithuania to Cairo.

The European Parliament also said that it was "essential that the scope of new investigations cover, beyond abuses of power by state officials, possible unlawful detention and ill-treatment of persons on Lithuanian territory."

In addition to Lithuania, the EP resolution refers to Romania, Poland, and other countries. They are asked to reveal the truth about their participation in the CIA program and investigate alleged presence of secret prisons in their territories. MEPs expressed regret over delayed examination of the suspicions and compensation of damages for those affected by the program.

The resolution was supported by 568 EP members, 34 were against and 77 abstained.

In conclusions of a parliamentary probe published in the end of 2009, Lithuania's parliamentary National Security and Defense Committee said it established that "a request received by the State Security Department from partners to fit out facilities in Lithuania that would be suitable for detention of a suspect."

The investigation revealed two premises in and near Vilnius, which could have housed detention facilities, in addition to several CIA-linked flights to Vilnius and Palanga in 2003-2006. However, the probe did not confirm that suspected terrorists were actually flown to Lithuania.