Vilnius Mayor Artūras Zuokas says that the sanction to hold nationalist Independence Day rally on Upės Street stands, therefore, the event is not legally possible in any other place, as demanded by its organizers. The latter hint at holding an unsanctioned event in central street all the same.
Source: BNS 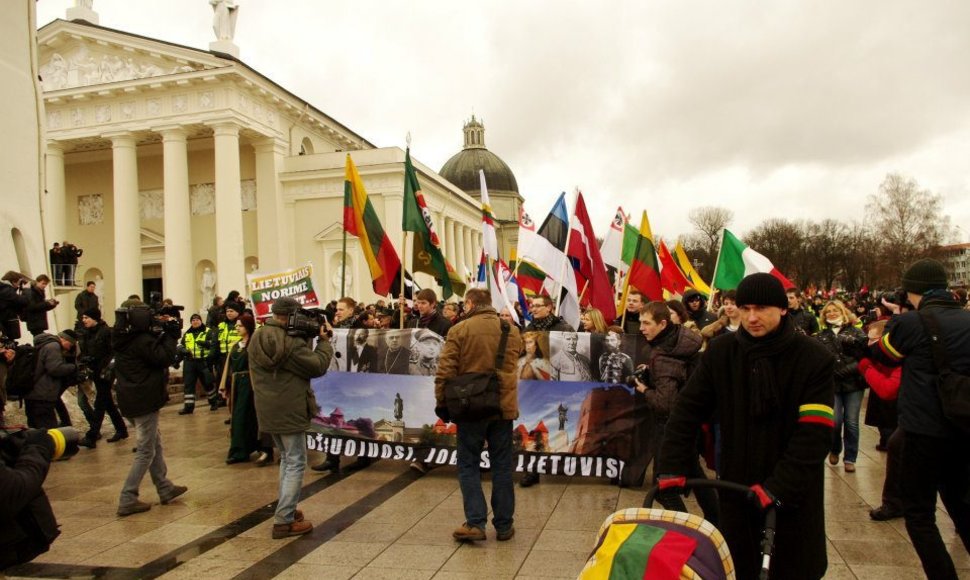 "We have issued a permit for the march on Upės Street and no revisions to the decision are planned. (...) The venue has been allocated, it is Upės Street, and we think that it will be the main venue for this type of events in the future," Zuokas said at a news conference on Friday.

After the municipality did not sanction the nationalist rally on the central Gedimino Avenue, offering isntead a venue further removed from the city center, organizers of the rally applied for a permit to march along Pilies and Didžioji Streets in the Old Town.

To back the decision, the municipality said other independence festivities were planned on Gedimino Avenue on March 11.

Asked to comment of the intentions made public by the organizers to hold an unsanctioned rally, the mayor replied that Lithuania had "laws and institutions in charge of enforcing the laws."

The Union of Nationalist Youth that organizes the march has hinted about a possibility of holding an unsanctioned event on the central Gedimino Avenue.

In a press release, the union's leader Julius Panka invited people to gather in the Cathedral Square at 3 PM local time on March 11.

Around 900 people took part in the rally on March 11 last year. Holding tricolors, the crowd marched through Gedimino Avenue, chanting "Lithuania" and singing patriotic songs. But some human rights defenders criticized the marchers for chants like "Lithuania for Lithuanians" and the presence of skinheads among them.