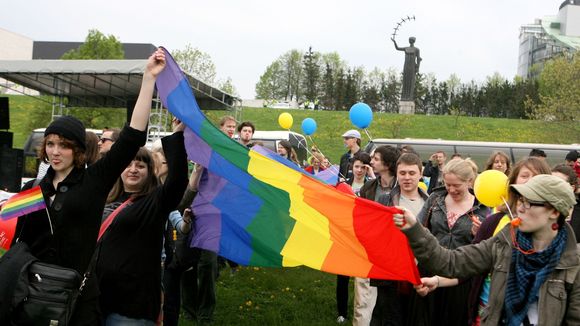 Having received a court's backing in one appeal case, the organizers plan to appeal again.

Previously, Vilnius authorities had allowed the event, but only on Upės Street, further away from the city centre. However, the organizers sued the decision and the Supreme Administrative Court of Lithuania ruled that the authorities had no right to unilaterally assign a venue for the event. According to the court, the city council could either grant a permission to hold the LGBT march on the location chosen by the organizers or refuse the permit altogether, provided there is legitimate ground to do so.

"The deputy administration director has decided against coordinating the location, timing and form," Julius Morkūnas, deputy director of Vilnius Municipality's Safe City Department, told journalists after a Wednesday meeting with organizers of the event, the Lithuanian Gay League.

He cites the law that bans rallies and picket actions closer than 25 meters from state institutions and closer than 75 meters from court buildings. There are several ministries and courts located on Gedimino Avenue.

"She (the deputy administration director – BNS) also based her decision on the constitutional article stating that the right to associations cannot be limited, unless it may limit the rights of other people," Morkūnas said.

The organizers of the March For Equality plan to appeal against the municipal decision.

"I cannot call this situation anything other than disruption. I would also like to remind you that the Lithuanian EU presidency is approaching, and I believe that it will be very difficult to explain to the international community why Lithuania is the only country in the EU where this problem still exists," Vladimir Simonko, leader of the Lithuanian Gay League, told journalists.

A representative of the police said after the meeting that police officers would be ready to ensure security during the march, irrespective of it location, be it Gedimino Avenue, as the organizers wish, or Upės Street a little further from the city center, proposed by Vilnius authorities.

"The position of Vilnius Chief Police Commissariat in this case is that the law does not allow us to agree or disagree as we must execute the law, i. e., to ensure public order and security, irrespective of the location of an event. It was stated during the meeting," Vytautas Grašys, head of the commissariat's Public Order Board, said.

Last week, the Supreme Administrative Court of Lithuania ordered Vilnius authorities to review their decision to allow the gay march on a street outside the city centre.

Having heard the organizers' appeal, the court ruled that Vilnius City Municipality had made a non-substantiated decision to move a planned LGBT pride march from central Gedimino Avenue to Upės Street.

The march is scheduled for July 27.

The march organizers believe they should be allowed to march through a street where marches and demonstrations often take place.

The first LGBT pride event in Lithuania took place in 2010, which was also preceded by court hearings on the march location and permission to hold it. The march itself took place eventually, with several hundred people marching through a heavily-guarded territory in the presence of around one thousand protesters.