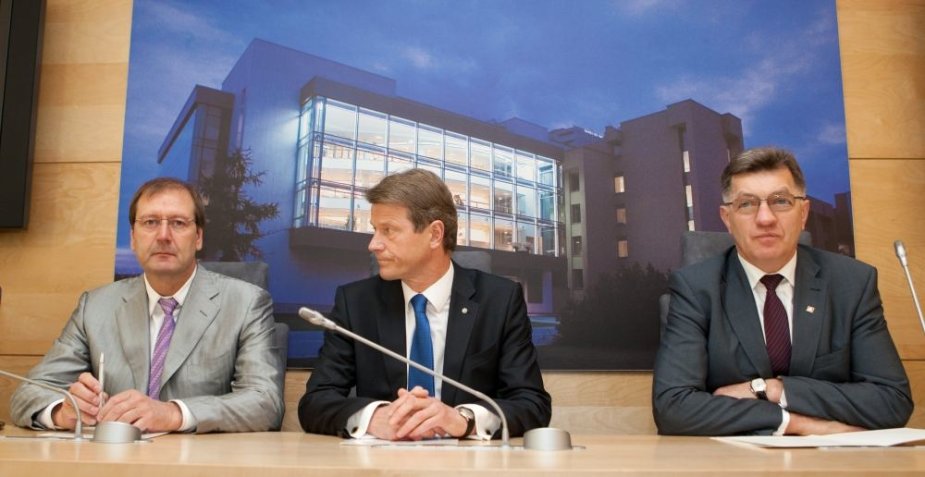 "Considering political, economic, and social situation in Lithuania and understanding responsibility for the country's future, we seek to present our voters with a thorough economic, social, and political program and are determined to discuss forming a post-election coalition among ourselves," reads the document.

The opposition parties committed themselves to pursue correct, fair, and transparent principles of election campaign, build their election promotion on provisions of the election program and the party's values, build a joint task force for pre- and post-election cooperation.

Furthermore, the three parties pledged to support each other's candidates whenever possible in single-mandate voting.

Butkevičius told a news conference on Friday that it was the Social Democratic leadership who came up with the idea of an agreement.

In Uspaskich's words, the document will serve as basis to open post-election talks on forming the ruling coalition and the government.

"The three parties will have the priority of negotiations after the election," he said.

"I hope the parties will be the core of the future coalition," Uspaskich's opinion was seconded by Paksas.

According to opinion polls, all three parties should share the top three places in the upcoming elections. Labor Party has been heading the latest opinion polls with 17-19 percent of votes, closely followed by Social Democrats with 15-16 percent, while Order and Justice party enjoys support of about 8 percent of respondents.

The general elections are scheduled for 14 October.

There are mixed opinions about an agreement signed by leaders of Lithuania's opposition Social Democrats, Labor Party and Order and Justice party on Friday, political scientists Jūratė Novagrockienė has said.

In her words, the agreement might be beneficial for the parties, but may also restrict their post-election freedom.

"Taking into account the fact that political outlook is not often stable, such an agreement might seem to be a careless step. Although results of opinion polls show the three parties should get the majority of votes, but in reality, one party might be more successful than others, and it might emerge that a third partner is not needed," Novagrockienė, lecturer of the Institute of International Relations and Politican Science, told BNS on Friday.

"For example, the Labor Party and the Social Democratic Party might get enough seats to form a ruling coalition together, or one party might need only a small partner, for example, the Electoral Action of Poles in Lithuania and the more partners, the fewer post are left," she said.

"On the other hand, such an early agreement is some sort of insurance, if one of the parties is less lucky. So there are mixed opinions about the move," the political scientists said.

Novagrockienė added, however, that similar agreements might make post-election search of partners more difficult. "The freedom of manoeuver might be restricted," she said, adding that the Order and Justice party might benefit more from the agreement as it had the weakest position as compared to the Labor and the Social Democratic Party.