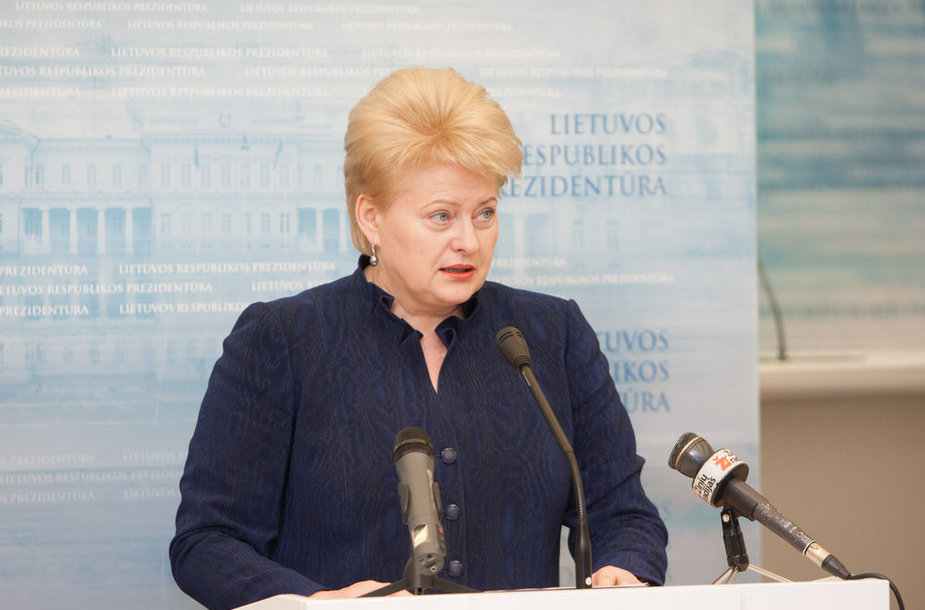 Lithuania's President Dalia Grybauskaitė has stated that the Labour Party cannot participate in the forming of the new government.

"In my opinion, forming the government should not involve a party which is suspected of the highest number of gross violations in the election procedures, which is suspected of black bookkeeping and leaders of which are charged with fraudulent bookkeeping," Grybauskaitė told reporters after meeting with Algirdas Butkevičius, head of the Lithuanian Social Democratic Party that emerged as leader in the parliamentary elections.

The president said that fair elections were a warrant of democracy and stability, yet a menacing number of violations was reported during the elections.

"Some 27 investigations were opened including 18 in connection to vote buying, and as many as 18 of them have to do with one single party – the Labour Party," she told journalists.

Grybauskaitė stated that the Social Democrats won the polls and the majority vote.

"Therefore, it is very likely they will be the party I will propose to form the government, once the Central Electoral Commission approves the final election results," Grybauskaitė said.

On the other hand, she stressed she would only support the political force capable of forming the ruling majority without the Labour Party.

"I and the president will search for the best possible versions, we're not planning to enter into clashes from the very first day. What would the prime minister's work with the president be amid tense relations? We perfectly understand the situation in our country and I hope we will reach agreement," the Social Democrats' leader told journalists.

After announcement of preliminary results of the second round of parliamentary elections, leaders of Lithuania's three opposition parties – Butkevičius of the Social Democrats, the Labour Party's Viktor Uspaskich, and Order and Justice party's Rolandas Paksas - agreed to form a ruling coalition, as they will have more than half of the mandates in Lithuania's 141-seat parliament.

"Politicians should be flexible and willing to search for the best version for Lithuania, and they should show the people of Lithuania a certain vision of post-election changes on the political arena, I mean moral matters, and a clear governmental programme with specific actions," Butkevičius said.

"You know well that the relations with the conservatives had been rather tense, and saying whether it is possible is not easy. We're talking about governing a state. Nevertheless, wise people are searching for the best options and result," Butkevičius said.

He expressed hope that an outline of the ruling majority should be clear by 4 November, a date set for the Central Electoral Commission to announce final election results.

Butkevičius emphasized he would never agree to incompetent people proposed to the government he would head.

"The government will definitely be free of dancers and singers," he underlined.

Butkevičius said he had a non-affiliated person in mind for the post of the finance minister, should he have a chance to propose a candidate. He refused to identify the person.

The Labour Party's leader Viktor Uspaskich had earlier stated that he would not impede the party from working in the ruling coalition, should the president say that Uspaskich cannot hold a ministerial post due to the financial fraud charges against him.

"Please tell the president – I will not be the splinter that would make the party hostage," Uspaskich told a news conference on Monday.

Shortly before the second round of parliamentary elections, the Lithuanian Prosecutor General's Office brought fraud charges against the Labour Party as well as Uspaskich himself, MP Vytautas Gapšys, candidate to the parliament Vitalija Vonzutaitė, and the party's former accountant Marina Liutkevičienė in the so-called black bookkeeping case.

On Monday, Uspaskich restated that the case was politicized.

In his words, the Labour Party should have four or five ministers by the number of mandates won in the parliamentary elections.

He said the party has 15-16 candidates for the pots but refused to reveal the personalities or the post he himself could hold in the new government.

"It is early to speak about this, I would like to develop the government's programme first and if a high enough percentage comes from the Labour Party's programme, I would," he said when asked if he would like to work as a minister.

Uspaskich also did not specify which mandate he was willing to give up – the current mandate as an MEP or the MP mandate won in the elections.

He said the party would also be interested in heading the parliament but noted he was not aiming for the post.

"This is not for me – I am the best representative of the executive administration rather than the Seimas. However, this is up to the party to decide," Uspaskich said.

The Lithuanian president's call to leave the Labour Party out of the ruling coalition is an important political factor but won't necessarily be decisive in case of successful negotiations among the three opposition parties, says Ramūnas Vilpišauskas, director of Vilnius University's International Relations and Political Science Institute.

In his words, the president's statement came as a signal of her willing to see a rainbow coalition, which would involve the Social Democratic Party and the Homeland Union – Lithuanian Christian Democrats (conservatives). Between themselves, they will share 71 MPs in the 141-seat Seimas.

"The president is popular and undoubtedly enjoys a good standing in Lithuania, and her word in this respect is important. Her statement speaks about violations, which indeed angered many people. In this sense, the statement can be rather popular among the people of Lithuania," the political expert said.

"On the other hand, if the new majority reaches agreement, the president will have very few legal powers to make any changes to the line-up of the coalition. Lithuania's parliamentary majority can be rather strong and disagree with the president's proposals. Therefore, from the purely formal and legal point of view, the president's position does not necessarily have to change the new ruling coalition that is being formed, however, her stance is undoubtedly an important political and moral factor," Vilpišauskas said.

What the Constitution says

Lithuania's president is not free to choose candidates for prime minister or ministers and has to look to set up a government supported by the majority. Nevertheless, she has certain instruments of political influence, according to the Lithuanian Constitutional doctrine.

Under the Constitution, the president "shall appoint, upon the assent of the Seimas, the prime minister, charge him to form the Government, and approve its composition."

In its interpretation of the provisions of the country's main law, the Constitutional Court said in its resolution of 10 January 1998 that the president "as the head of state should work to form a government supported by the majority, consequently, he should not ignore the parliamentary majority, although he has the right to choose."

"According to the European Constitutional tradition, the president should appoint the person supported by the parliamentary majority to head the government. This is the Constitutional practice in Lithuania, as well," the court said.

Under the interpretation, "the main task of the president's operations is to warrant interaction of top authorities."

"In formation of the government, his (the president's) actions should first of all be determined by the duty to act in a way to form an efficient government, i.e., which enjoys trust from the Seimas," the Constitutional Court has said.

According to the doctrine, the president is not free to choose candidates for the prime minister or ministers.

"Consequently, principles of parliamentary democracy stipulated in the Constitution lead to a presumption that the president of the Republic is not free to choose candidates for prime minister or ministers, as appointment of the above-mentioned officials in all cases depend on trust or lack of trust from the Seimas. At the same time, one cannot ignore the fact that the president of the Republic, as part of the executive administration, has certain instruments of political influence in forming the personal line-up of the government," the court has said.