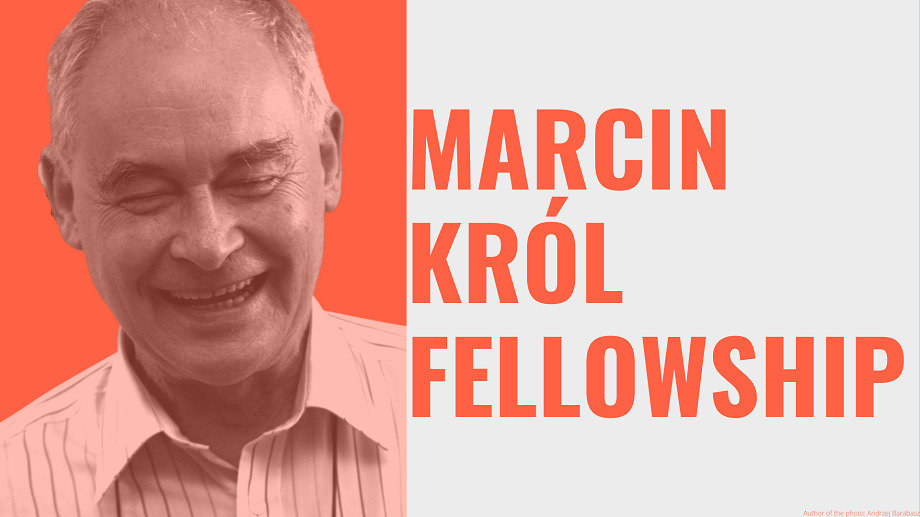 Marcin Król Fellowship. Photo by Andrzej Barabasz
Source: 15min
‘Truth must remain our guidepost, even though the direction of our path is uncertain, and the destination barely known’. A quote of Marcin Król, founding Editor-in-Chief of Res Publica, recalled by Ivan Vejvoda, acting rector of the Institute of Human Sciences in Vienna.

The fellowship is open to journalists and influencers who want to strengthen their analytical portfolio, as well as to policy analysts who seek to build up their voices in the public debate on the future of democratic security in Central and Eastern Europe. The third edition of this annual programme by Visegrad Insight, Res Publica Foundation.

The challenges that Central and Eastern Europe (CEE) is facing, such as reduced trust in rule-based governance; increased vulnerability to Russia, China and other non-democratic powers; digital disruption of political culture; rapid green transformation; social and political polarisation and the general decline of democratic values, alienate civil society and media from the democratic agency and generate instability in the greater neighbourhood.

Democratic performance in CEE is further eroded by declining information sovereignty, i.e. society equipped with critical thinking skills and has access to a pluralistic information space that allows for democratic processes to develop and be resilient to both domestic and foreign challenges, which are especially prevalent during elections.

More than ever before, there is a demand for strong voices that explain risks, develop scenarios, and map out solutions that promote democratic values and stable Transatlantic relations.

To promote democratic values and to nurture good Transatlantic relations, Visegrad Insight, Res Publica continue to focus on these perils originating from both within and outside of the CEE. More than ever before, there is a demand for strong voices that explain risks, develop foresight and map out solutions.

These voices are Fellows at Visegrad Insight, Res Publica Foundation, who speak on the region from the region; contribute actionable solutions and future-oriented narratives, and engage in practice-based activities aiming to inform and empower next-generation leaders. In turn, the Fellows and other contributors can exchange experiences and gain broader publicity through a large network of cooperation with national language media.

Visegrad Insight is the main Central European platform of debate and analysis that generates future policy directions for Europe and Transatlantic partners. It was established in 2012 by the Res Publica Foundation — an independent think tank in Warsaw. This programme is supported by the National Endowment for Democracy and as of 2021 is honouring the late founding Editor-in-Chief of the Res Publica journal.

We are looking for:

Marcin Król (1944-2020), one of the most renowned Polish public philosophers and the founding Editor-in-Chief of Res Publica (later Res Publica Nowa), was an advisor to the first democratically-elected prime minister, Tadeusz Mazowiecki, and participant of the roundtable negotiations in 1989 leading to the breakdown of the communist regime in Poland. In his memory, Visegrad Insight and Res Publica Foundation are awarding fellowships to outstanding public opinion leaders from CEE, who stand up for democratic ideals.

A student of another famous Polish thinker Leszek Kołakowski, Król was a philosopher, historian of ideas, lecturer and columnist who helped lay down the foundations for a democratic Poland. Preoccupied with the future of democracy, he nurtured liberty of conscience and practice. An active and influential public intellectual, he sought a democratic revival through the next generations and daringly believed that democracy needs new rejuvenation by reshaping public space.

He was 23 when he finished both philosophy and sociology at the University of Warsaw in 1967; the next year he started his doctoral studies only to take part and then play a leading role in organising student protests in defence of his Jewish peers who have fallen victim to the antisemitic ‘national communist’ narrative of the Gomułka government. This rhetoric ultimately led to the expulsion of many Polish Jews in 1968. For his role, he was accused by the regime of ‘organising illegal meetings’ and sent to prison only to be released three months later without trial. This did not deter him from furthering his studies as well as his activities in protests. After gaining his doctorate, he spent two years in the US teaching at Yale and Austin University only to go back to Poland. In 1978, he founded Res Publica and was the first Editor-in-Chief.

Res Publica at its start was an underground publication to avoid censorship and focused mainly on themes of politics and Poland’s ties to Europe, but also gave a realistic critique of the current regime as well as criticised the grand romantic and nationalistic traditions within Polish thought. They described themselves as ‘neither socialists nor nationalists’. Król always stressed nuisance and detested ideological dogmatism.

In August 1980, he signed an open letter to the regime backing dialogue with the ‘August strikers’. He also became part of the editorial team of ‘Tygodnik Powszechny’ as well as an advisor to the Solidarity movement. When negotiations at the round table talks commenced, Król’s principled support for democracy along with practical approach helped elevate the proceedings, especially regarding the transformation of the media.

After the fall of communism, Marcin Król continued to play a role in the public space. He was an advisor to the presidential campaign of Tadeusz Mazowiecki, who lost to Lech Wałęsa. After the campaign, he took a more active part in the debate on democratic transition and become more critical of his own role and of the way the transformation took place. In his opinion, the elites of society have lost touch with the people as when he said ‘our chattering classes now find life so pleasant that we forgot to discuss — or omitted on purpose — the problem of those who were left behind by the train called freedom, democracy and the free market’ (Poland’s House Divided, 2000) In the last decades, he was chairperson of the Supervisory Board of the Res Publica Foundation, the Stefan Batory Foundation and the Institute of Public Affairs as well as a member of the advisory board of the Institute of Human Sciences in Vienna.

A lecturer and dean of the Faculty of Applied Social Sciences and Resocialisation of the University of Warsaw as well as a writer to numerous magazines, he reflected on liberalism, the role of Romanticism in Poland, patriotism, as well as the intellectual and spiritual crisis in Europe which he viewed as something that could be fatal to democracy. The way he saw the modern world is best summarised by the quote: ‘We are dealing with a moderate economic crisis, a serious political crisis, a dramatic civilizational crisis, and perhaps a fatal spiritual crisis’ (Europa w obliczu końca, Europe in the face of the end, 2012). Marcin Król was an avid believer that democracy is not the ‘end of history’ and as a ‘given’ but as something that needs to have a purpose worth fighting for, lest we fall back into the kinds of regimes that he fought so hard against in the past.

Author of the photo: Andrzej Barabasz