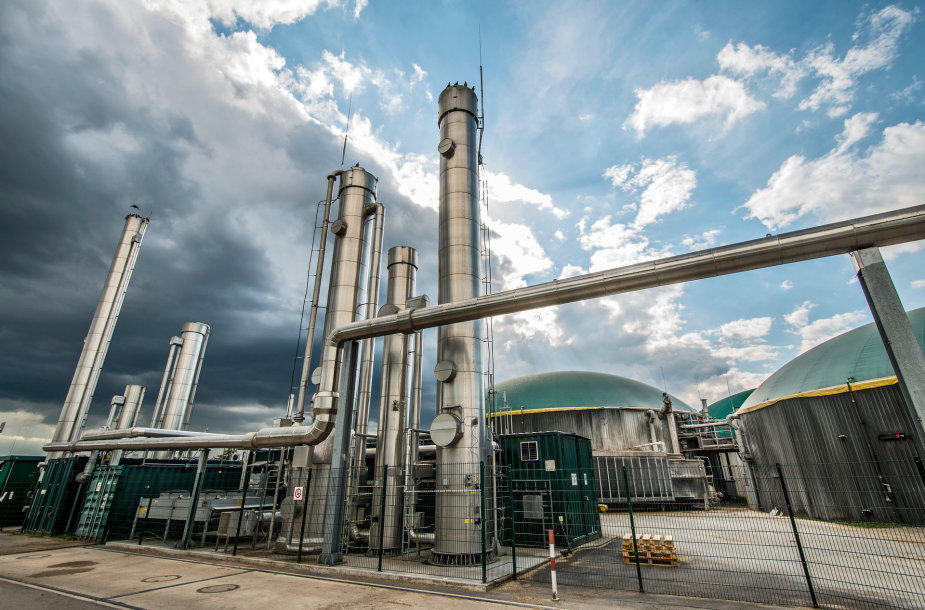 123RF.com nuotr. / Biodujų jėginė
Source: 15min
So far, all biomethane used in Lithuania has been imported from foreign countries through international certificates and not produced in Lithuania. However, the situation is set to change dramatically in the coming years, with one of the first biomethane gas production plants due to be built near Panevėžys, in Šilagalys near the Via Baltica motorway, by 2023. The biomethane will be safely produced from biodegradable waste from the local agricultural company Šilagalis - animal manure and agricultural and other organic waste. The construction of the plant and the improvement of the infrastructure is planned to cost EUR 4 million.

The produced biomethane will meet the sustainability criteria for biofuels set out in the Renewable Energy Law and will be able to be fed into Lithuania's gas pipeline network along with natural gas. More than 2 million cubic metres of biomethane are planned to be produced annually, which could be transported through the natural gas pipeline and used as fuel for gas transport.

The project was initiated by Dvire, a start-up promoting ecological transport fuels, Horeca Sprendimai, a food waste processing company, Šilagalis, an agricultural company, and SG dujos, a developer of natural gas (methane), biomethane, and hydrogen infrastructure systems for transport. The company Engerta was established to implement the power plant project.

According to Marius Čižas, head of the start-up Dvire, the biomethane plant will be an important factor in significantly reducing road pollution, as it will give vehicle fleets the opportunity to use fuel that is virtually pollution free. "We will promote the use of methane and biomethane powered transport because in the coming years it will be the fastest way for transport companies to restructure their fleets and significantly reduce CO2 emissions, followed by a wider use of hydrogen and electricity from solar, wind and recycled waste," says Mr Čižas.

Lithuania's National Energy Independence Strategy foresees that 15% of the energy consumed by the transport sector by 2030 will come from renewable energy sources, including biomethane.

According to Mr Čižas, the European Union is currently making major efforts to achieve a climate-neutral economy by 2050 and to promote the use of alternative renewable fuels such as biomethane, hydrogen and electricity in every Member State.

According to Vytautas Keršys, CEO of Engerta and Horeca Sprendimai, although there are biogas plants in Lithuania that produce biogas from biodegradable waste and in turn produce electricity and heat, none of them produces biomethane, which could be used as sustainable energy source for transport, industry and domestic consumers. "We plan to build a modern, state-of-the-art power plant that will make a significant contribution to both the development of sustainable fuels and a cleaner environment. The biomethane plant will have virtually no waste in its production process - agricultural waste will be recycled, animal manure will be turned into green gas, and the remaining biomass will be turned into a substrate, which will be treated as a high quality, nitrogen-rich fertiliser that can be used to fertilise crops," said Keršys.

Gražvydas Stankūnas, one of the shareholders of Engerta and the head of the agricultural company Šilagalis, which is the main supplier of raw material for the plant, points out that the biomethane plant will solve the persistent problem of where to put the company's organic waste, such as livestock manure, slurry and other wastes. "This new partnership will make us a much more modern farm - the biomethane plant will not only solve the problem of the smell of manure currently stored in open storage facilities, which the local community has been complaining about, but at the same time the plant will provide environmentally friendly fertiliser for our company's crops. It will also improve infrastructure, create new jobs and significantly reduce noise pollution. All activities will be carried out on the company's existing territory and on the adjacent land, in compliance with all sanitary and environmental requirements," says Mr Stankūnas.

According to Virginijus Korsakas, one of the initiators of the project and the head of SG dujos, the location of the first biomethane plant was not chosen by chance. "Several years ago, we had already foreseen that one of the first liquefied natural gas filling stations for transport in Lithuania would be installed near Panevėžys, one of the most important transport hubs in Lithuania. With Lithuania's ambitious climate change mitigation plans and the adoption this year of the Alternative Fuels Law, which promotes the use of renewable energy sources, we decided to take a broader view and look for opportunities to produce biomethane in Lithuania instead of importing it. We hope to create a centre for renewable fuels near Panevėžys, not only with a compressed and liquefied natural gas filling station for transport, but also with a modern biomethane plant nearby, supplying our station and the city with raw material and turning the waste of a neighbouring agricultural company into what could be Lithuania's first biomethane, which is to be extracted and transported by pipeline," says Korsakas.