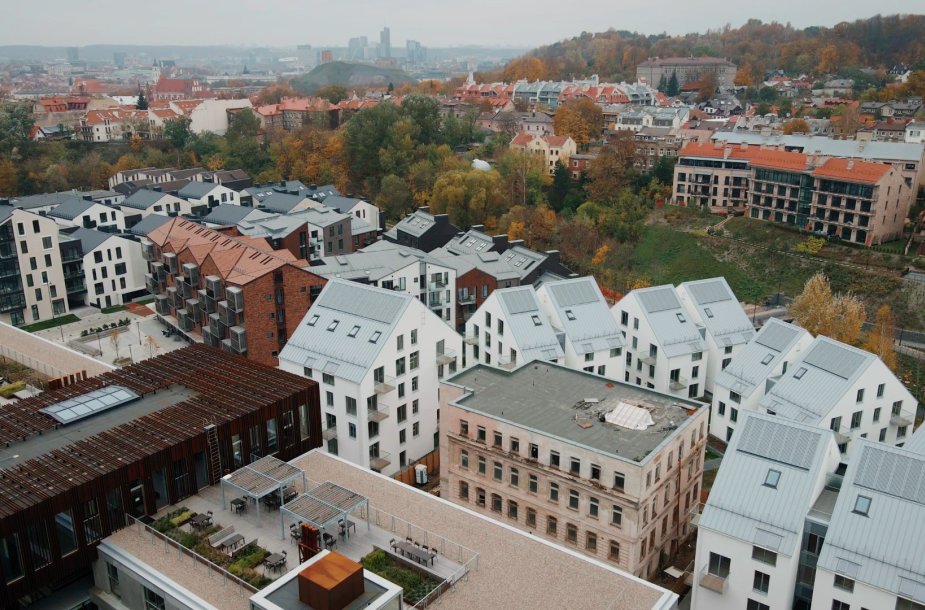 One of the largest real estate conversion projects by the Darnu Group in Lithuania is not only seeing the creation of new buildings, but also buildings that are decades or even a century old are receiving a modern facelift. The company will be reviving a building in the Paupys area that marks various significant epochs, and will invest in the renovation of Soviet architecture.

Darnu Group’s director for development and construction Povilas Urbonavičius says that the Aukštaičiai Street 14 building that the company decided to preserve is a symbolic link for Paupys between the area’s historical memory and its present. This four-storey building rose up in the year 1887, and has had several functions over the past 130 years. After the restoration of independence, this building was part of the Skaiteks meter factory complex, but when it went bankrupt, the unused premises were purchased by various businesses.

In the late 19th century, the building was host to a lock factory. Back then, it was a three-storey building, which was notable for its volume because it was the largest on Aukštaičiai Street. This is one of the best-preserved historical buildings previously owned by Skaiteks, having kept its initial building layout, main walls, and windows and door placement.

“For the past decade, the building stood abandoned. This is evident from the two birch trees growing on its top floor, which we have preserved and moved to grow in the inner yard. Historically, a truly strong connection between nature and the city formed in Paupys, and so we wish to retain it under suitable conditions, preserving all its existing elements,” P. Urbonavičius explains.

It has been decided that the historic building will be reconstructed, performing building façade renovation and reviving it for a new life, while retaining a part of its old heritage and creating a modern context. It is planned that after the renovations, the building’s spaces will be used for residential purposes.

According to P. Urbonavičius, renovations will also be performed on the Aukštaičiai Street 6 building that Darnu Group does not own. The company has allocated 50 thousand euros for its external modernisation, encouraging the building’s owners to also invest in the renewal process.

The renovation project’s author architect Martynas Marozas notes that with conversions ongoing in old areas, the consolidation of different owners’ property for combined changes is never an easy process, and the first impulses of initiative and goodwill are crucial. With this, numerous ways emerge to achieve the desired goals and deeper integration of the area into a joint architectural language.

“There are various practices around the world. One strategy is to prepare a joint public space renewal project, and another is to offer a combined strategy for separate blocks. Sometimes, neighbours voluntarily shape up just seeing that everyone has renewed themselves in the vicinity. There are various ways to promote this.

“However, what is most important is goodwill, because without it, nothing moves forward. By investing a great deal in public spaces, developers augment the value of all surrounding real estate, which completely changes the context for change, as well as offering motivation,” says M. Marozas.

Paupys’ conversion into a multifunctional area is part of the Vilnius city municipality strategic plan’s project Architektūros Parkas for 2010-2020, which seeks to renovate the historical territory between the Vilnia river, Maironis, Subačius and Pavilnys streets in separate stages, moving the industrial companies out that were there previously and integrating the locations into a single city architecture context.

Three residential, commercial and public blocks have been completed in the area, and work will conclude this year in another two stages. Construction work on the final blocks has already been launched.

In total, Darnu Group is investing over 150 million euros into the Paupys area conversion project, and the expected completion date for all construction work in the area is in 2022.