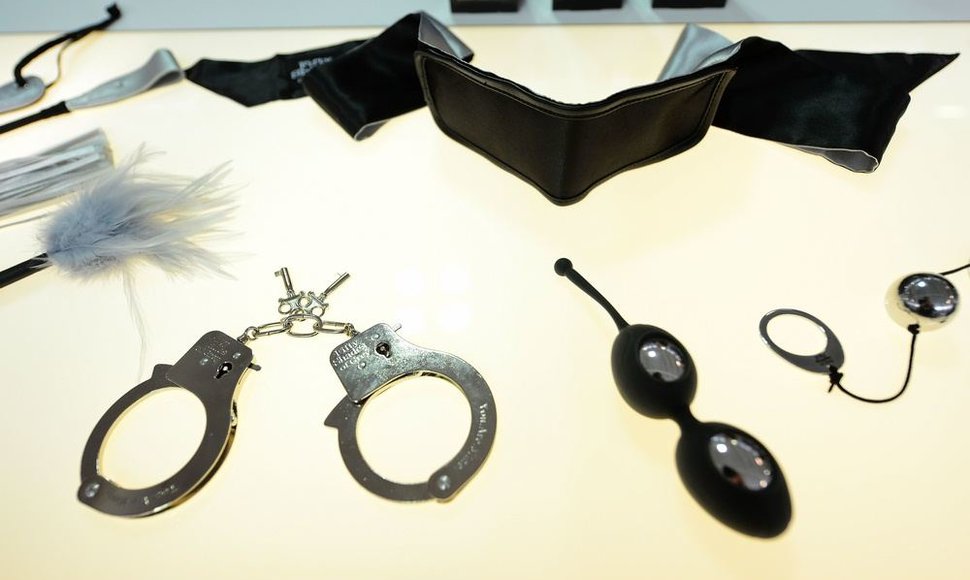 London Fire Brigade reports that, since the Fifty Shades trilogy hit bookshops, it has received significantly more call-outs by people who need help getting out of handcuffs. Nine male Londoners have had their penises stuck in rings, Express.co.uk reports, while one inventive Brit had his penis locked in a toaster.

Lithuanian fire fighters have yet to receive any call-outs about sex games gone wrong. However, sales figures from book stores – as well as adult shops – suggest that the international Fifty Shades craze has caught Lithuanians' attention, too.

Fifty Shades of Grey, the first book in the series, has sold over 20 thousand copies in Lithuania. The recently published second book, Fifty Shades Darker, has already been bought 10 thousand times. The third book is to appear in shops in autumn.

Giedrė Jonušaitė, director of online adult shop suaugusiems.lt, is happy that Fifty Shades has stirred the adult toys market in the country.

“The book gave a huge push to our business. People are writing emails very actively, with questions, asking for advice. We had ordered a themed toy collection inspired by this book – everything was sold in a flash. We have ordered a new shipment, it will reach Lithuania soon,” Jonušaitė says.

Though adult toys usually come in glaringly bright shades, Lithuanian customers seem to favour ashen colours. That, according to Jonušaitė, is another influence of the book.

Shop owners have noted that adult toys are particularly popular with men who like to add it as souvenirs when they present E.L. James' book to their girlfriends.

Donatas Šerpenskas, who co-owns another adult shop, fantazijos.lt, says he has also observed more interest in toys described in the book.

“In filmed footage, we can see actors' faces that we either like or not. Meanwhile written texts give us an opportunity to conjure up images we want, for instance, we can imagine our own partner as the main character – there's more room for imagination,” Kaluginas explains.

According to Kaluginas, novels like the Fifty Shades trilogy brings social benefit: “A book can provoke a discussion with your lover. After the discussion, it might turn out that both partners actually share some secret fantasies.”

He adds, however, that he is not surprised that men of the clergy or self-appointed guardians of public morals deride books like Fifty Shades as bad literature and, moreover, something that upsets the society's morality. “And they are right, from the point of view of the morals they represent. It is a matter of world views, so both sides can be right,” Kaluginas believes.

In Lithuania, Fifty Shades of Grey, the first book in the series, has sold over 20 thousand copies. The recently published second book, Fifty Shades Darker, has already been bought 10 thousand times.

The third book is to appear in shops in autumn, October or November.

Danguolė Viliūnaitė, director of Alma Littera publishing house that brought the Fifty Shades trilogy to Lithuania, says there was no doubts about the book's success in the predominantly catholic country.

"It has already been tested with readers worldwide and Lithuanian readers hardly differ from those around the world, especially when it comes to popular literature. We knew the book would be a hit, so many Lithuanian publishers competed for the rights to publish it - that's what auctions are for," Viliūnienė says.

The Fifty Shades trilogy is mainly targeted at women, but, according to the director of Alma Littera, it is quite popular with men, too.

It has been called, sometimes derogatorily, literature for housewives. "But what is a housewife these days?" Viliūnienė asks. "Gone are the times when a woman's only job was kitchen, home, and kids. These days, housewives are usually women who are out of paid job only temporarily, for example, on maternity leave. These women are educated, have career ambitions, and their reading habits are not necessarily limited to popular literature."

She notes that E.L. James' books are not manuals in erotics. "They contain adventures, a touching love story, even hints of a detective story. And love is unimaginable without erotics - either in real life or in one's fantasies."