Lithuania's legendary climber Vladas Vitkauskas: There are no heroes in mountains

One of the few vivid memories I have from my early childhood is a page in a 1993 magazine with a photo of Vladas Vitkauskas, the first Lithuanian climber to reach the top of Mount Everest, looking at me from the highest spot on Earth. 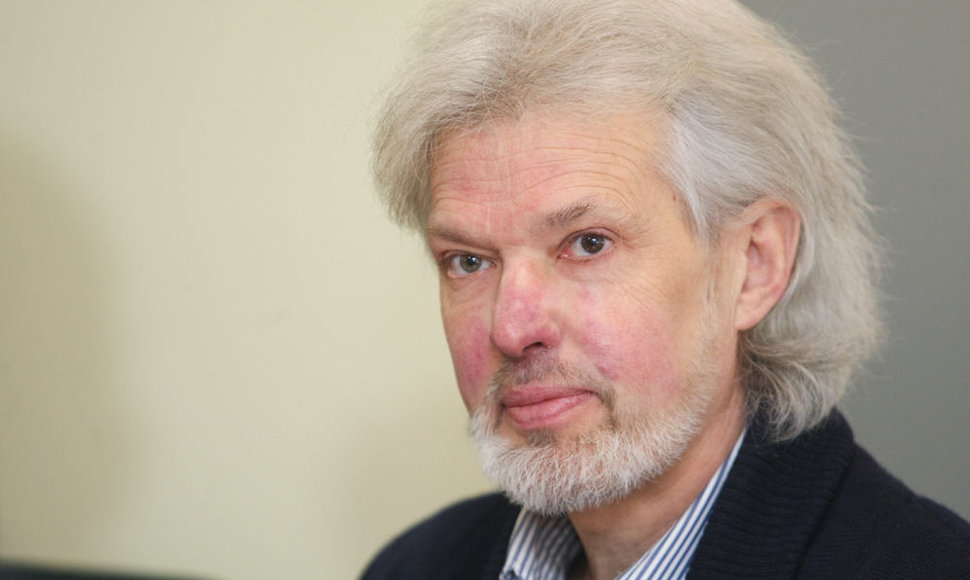 Twenty years later, I meet Vitkauskas in an empty room of the Energy Technology Museum, where he has a desk. It makes me feel nostalgic – in 2013, Lithuania does not have many heroes like him left while memories of their quests collect dust in museums.

But Vitkauskas, with his hand resting on the desk, soothes me: “But how do you tell who is big and powerful? An elephant who drags a massive log or an ant carrying a blade three times its weight? And how do you place a man between them who climbs a mountain? There are no heroes – that's one of the main things that mountains teach you.”

As if to give a proof for his words, the climber opens a closet and takes out a faded piece of thick cloth – a flag of Nepal.

“This flag belonged to a Nepalese companion of mine Pasang Lhamu, who was climbing Everest with me. She died because she wanted to be the first and she rushed too much. We discovered her body and this flag only three weeks later. I am going to take it back to Nepal for the 20th anniversary of the expedition,” as he was relates his story, I rub the flag between my fingers trying to imagine what Vitkauskas has experienced during his life. He has seen over fifty of his companions lose their lives to mountains, including his own son.

Having stared death in the eye so many times, Vitkauskas might have come to an understanding with it: “It is not as important right now how much time I've left, what matters is that I and people around me are happy.”

One does not climb, one hikes to Mount Everest

When the Lithuanian climber headed towards the Himalayas in 1993, he only had 500 US dollars in his pocket and a Lithuanian flag. Many people suggested afterwards that he enter his quest into Guinness World Records as the cheapest expedition to the planet's highest peak.

“If time went back and I had to climb under the same conditions, I would not try to repeat it,” Vitkauskas says. It was a big strain on his health – which was not great to begin with – and with so little money and equipment, the expedition was a very risky adventure.

Over the twenty years since Vitkauskas' quest, climbing Mount Everest has become a much safer and in some ways easier affair. Figures attest to that. In 1993, one out of every four climbers would not come back. Now the statistic is one out of ten, counting all the expeditions since the first man conquered the Himalayan peak.

“Today's expeditions to Everest are more like hikes, that's how I call them. Everyone with 50 thousand dollars, good health, and decent physical preparation can make it to the top. Sherpas carry their stuff, expedition leader takes care of security and equipment, all you have to do is enjoy. The only things that can come in your way are your health and bad weather,” Vitkauskas says.

If you do not know the mountains, don't do it

Vitkauskas has climbed all the major peaks in the world and he seems a little annoyed by the question why we have recently had so many reports about killed climbers, including Lithuanians. “In Lithuania alone, thousands die of cancer each year,” Vitkauskas says, “yet there are fewer reports about them than about deaths of a handful of climbers.”

Then he adds, after a pause: “And yet, you cannot deny that mountaineering is becoming more popular, people now have more money to spend on equipment and travelling, so fatal accidents do happen. Most of them happen in Europe, in the more accessible mountain ranges, where people lose their vigilance. On big and difficult expeditions – like to Everest – the number of fatalities is gradually decreasing.”

Vitkauskas' advice is to not take unnecessary risks: “If you don't have a driver's licence and are not ready to drive, yet you still do, an accident is bound to happen sooner or later. The same applies for mountain climbing.”

He says that almost all the mountaineering accidents occur due to climbers' own fault – haste, overambitiousness, misjudged conditions, conflicts within the team, and other fatalities that are man-made rather than natural.

“What's next?” I ask my childhood hero. “Mountains,” he smiles. Though these are mountains of a different sort. When one has climbed the highest peak of every continent on the planet, one turns attention to small things.

Vitkauskas is positive he won't be climbing Everest again, yet he has accepted an invitation from the Nepalese to come to Kathmandu in May to open a photo exhibition, to visit old places, to remember the companions that are no longer there.

Vitkauskas himself invites all his friends and fellow climbers to commemorate the 20th anniversary of his Everest expedition on 11 May on the highest point in Lithuania – Aukštojas Hill.

The climber now dedicates most of his attention to the modest Lithuanian peak (293.84m). “If only you could see the view from the new observation platform – as good as from any mountain,” Vitkauskas says, only half-jokingly.

As we walk out of the Energy Technology Museum, he hints to another small dream of his. If health and life permits, he would like to escape the city and settle somewhere near Kernavė, at the foot of five small but cosy hill forts. Hardly the Himalayas, but still closer to heart.

Another Lithuanian, Edita Uksaitė Nichols, is climbing Mount Everest from the Tibetan side this spring.

She hopes to become the first Lithuanian woman to have been to the world's highest peak. Edita, who now lives in Switzerland and works for the UN Food Programme, wishes to use her quest to draw attention to Sahel, a poverty-stricken African region, and collect some funds for it.

“With all due respect to other Lithuanian climbers, Edita is the best candidate to reach the summit. One should look hard for another climber as responsible in their preparations as she is, among both men and women,” Vitkauskas says about the fellow climber.

According to him, only extreme weather could prevent Edita from succeeding in her quest. Vitkauskas is certain, however, that he will shake hands with the first Lithuanian woman who has been atop Mount Everest as soon as this May.