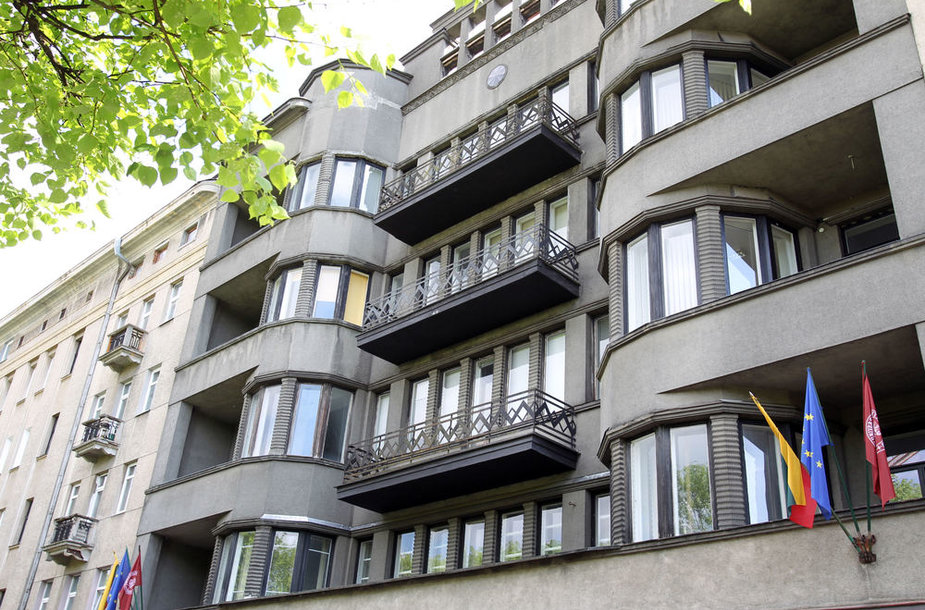 Dovilė Jablonskaitė
Aktualijų žurnalistė
Source: 15min
Arūnas Gelūnas – former minister of culture and now Lithuania's ambassador to UNESCO – has fixed his attention on his native town, Kaunas. He has mentioned he will be seeking to have Kaunas and its modernist architecture – particularly on Donelaičio Street – made a UNESCO World Heritage Site.

Gelūnas notes that some pre-war buildings in Kaunas – examples of modern functionalist architecture – are true masterpieces, appreciated by architects and tourists alike.

Architect Audrys Karalius says Kaunas' Smetona-era (1926-1940) architecture is unique: “So who else but a child of Žaliakalnis (i.e., Gelūnas) could come up with the idea?”

According to Karalius, people in Kaunas who now live in houses built between the wars do not always realize the historic, artistic, and cultural value of their residence.

“It depends on one's mentality: an educated man is able to appreciate a building's architectural style, he is proud that his house used to be home to one or other prominent figure. But ordinary people often judge things by money and they reason thus: if we panel the building with memorial plaques and cultural markings, there might be trouble when we want to install plastic windows, change partitions, or raise the roof. In this respect, UNESCO protection is a nuisance and can knock a home price down,” Karalius speculates, noting that Lithuanians do not appreciate the fact that Kaunas architecture is of great value not just in the Lithuanian context, but in the entire Baltic region or even Europe.

Meanwhile foreign architects, he says, are often amazed at the concentration of high-quality architecture in central Kaunas.

“I have served as a guide to foreign architects many times. About ten years ago, a group of Danes left me speechless: they started listing things they wanted to see – buildings by Vytautas Landsbergis-Žemkalnis, Karolis Reisonas. What is going on, I thought. How do they know these names? And the Danes then pull out a catalogue published in their country, European Interwar Modernism. We still haven't got a publication like that – and Kaunas was already mentioned as a site of extraordinary modernist architecture back then,” Karalius says.

Examples of modernist interwar architecture are to be found in Palanga, Vilnius, Klaipėda, Ukmergė, Šiauliai. In Kaunas, however, they are more concentrated and less scattered, concentrating in the districts of Newtown and Žaliakalnis.

“These are not just separate buildings, but rather entire blocks. It is unique that they managed to develop the entire town, not building by building, but in entire blocks. And all these structures were designed by the brightest architects of the time, people who were educated abroad and came back to Lithuania full of ideas,” says architect Algimantas Kančas.

“Therefore there was so much valuable architecture between the wars. If today, you could find maybe ten good new buildings a year – back then, every other structure was of high architectural quality,” Karalius agrees.

Kančas believes that Lithuania boasts two periods of art and architecture that are truly world-class. Namely, the Lithuanian Baroque and Kaunas modernist architecture: “In all other periods, we were usually 100-200 years late – this is what happened with the Gothic period and other styles, Romanesque art bypassed us altogether.”

Coherence of function and form

Several favourable factors contributed to the burst of modernism in Kaunas: the newly independent Republic of Lithuania was desperate to give itself a modern face, the society was ready for change, and that change could be delivered by young and talented architects fresh from foreign architecture schools: Mykolas Songaila, Stasys Kudokas, Bronius Elzbergas, etc.

“After Poland occupied Vilnius, Lithuania's government moved to Kaunas. And there was not enough housing to accommodate the new state functions. Construction works would never stop. Today's tendencies are to ban, forbid, stop. Back then, the authorities were like this: go, build, develop. Two-storey tsarist houses would be torn down to make way for new five-six-storey structures that were more in tune with international architecture trends. Art was a means to move away from the former occupying forces – not just architecturally, but politically, too. Some even referred to Kaunas as Little Paris,” Kančas notes.

“This architecture shows that the country was run by educated people – prudently and shrewdly. Architecture encompasses finance, the art of masonry, mature tastes of the people who commissioned the buildings. They did not care about having as many square metres built for as little money as possible – they were thinking about the coherence of form and function. The period shows a very healthy temperature in the body politic. Besides, this legacy is of the modern Republic of Lithuania, not the Grand Duchy, material heritage of a conscious, brave, and bright state,” Karalius is convinced.

Architects also draw attention to the clear typology of Kaunas Smetona-era architecture. Throw a glance at the Central Post Office building designed by Feliksas Vizbaras – and you see instantly it is a post office and not a residential house.

“Modern architecture gave free rein to imagination, relied on composition and talents of the architect. Mastery was put above tradition, there were no more clear rules. This style is characterised by clean surfaces unburdened by an abundance of detail. Proportions come forward: the relation between the surface and openings, windows, etc,” Kančas explains.

“Plane horizontality. Slopes are hidden behind parapets, these buildings have corner windows, sometimes curved. Quality plastering. Many buildings in Kaunas have not been retouched since the 1930s, when they were built and plastered. Another thing to be noted – it was a white architecture: bright, very positive, emotionally refreshing, optimistic,” Karalius says.

Jurgis Rimvydas Palys, a prominent older-generation architect, stresses that the Kaunas strand of modernism is very humane: “There is no loftiness, the scale is beautiful, spaces are masterly planned-out in museums and clinics. Modern but at the same time subtle. Doors are high, rounded, with nickel-plated handles and brass plates on the underside. Arched stair railings, so they give a sense of softness and plasticity. One window round, another rectangular. Only the necessary minimum of decoration – to avoid the building looking like a bloodless box.”

Palys says that architecture of this period in other cities – Brussels, Warsaw, London, one or two buildings in Tallinn – does exist but is “dull and dry.”

He regrets that only now has someone thought of having Kaunas modernist architecture included into UNESCO registry.

“I am positively outraged they've only realized it know – I've been championing this idea for a very long time, 20 years ago, then 10 years ago, and once again 5 years ago. I've written articles and given talks, but everyone would just mock me. Many buildings have been damaged over these years. People working with heritage would say: 'Let's preserve what is most valuable: that building, or that one.' And I would insist that we had to preserve not separate buildings but their entirety,” the architect recalls.

He says he has not seen a single reconstruction of a Smetona-era building done properly: “The damage done ranges from light to heavy. No understanding whatsoever. I sometimes get a feeling that barbarians have overtaken an old civilization: they put a barn-like roof on top, install a Soviet-type door, glass in balconies – disgusting to watch. I walk down the Smetona-era Kaunas and count how many times it has been defiled.”

Palys is convinced that UNESCO protection could help defend Kaunas architecture from barbarism of its inhabitants and peasant mentality of the authorities.

Older owners who have inherited property from their families are usually more careful, while new owners spare no sacred cows.

“There are beautiful exceptions, though, when new owners, for instance, restore old windows,” Miliukštis notes, adding that the UNESCO initiative should have been started years ago. “This would put more restrictions [on developers], but make the town more attractive to tourists.”

However, deputy director of the Cultural Heritage Department, Algimantas Degutis, does not put much hope into UNESCO taking interest in Kaunas interwar architecture.

“First, the country itself must prove it is taking care of its heritage. You cannot come and say: Put us on the list and then we'll protect it. Do we seem like we appreciate what we've got?” Degutis asks.

He believes that had the initiative been started a decade ago, it would have been easier to prove the significance of Kaunas architecture. Under prevailing winds now, it would be difficult even to have the Baroque historic centre of Vilnius declared a UNESCO World Heritage Site, he says.

“As more and more countries ratify the heritage protection convention, it becomes increasingly difficult to push interests of one single country. It is easier when nominated sites span across several countries. The convention has been joined by countries in Africa, Asia, Latin America. Each region has a quota in the representative committee. European countries now make up a minority therein, so it is hard politically to have a site based in Europe accepted by the committee. There are different factions: Spanish-speaking countries, African nations, Arab countries. They vote along faction lines – just like in parliament,” Degutis says.

Therefore smaller countries must do a tremendous lot of lobbying in order to draw everyone's attention to their heritage.

“It was much easier to convince about Vilnius Baroque – we were an interesting new post-soviet country, having just emerged from behind the Iron Curtain. Vilnius old town with its medieval street network was one of the biggest sites, besides, a capital city, part of the history of the Grand Duchy, a bridge between the East and the West, a melting pot of nations, an example of coexistence of 11 different confessions. All this helped get international recognition,” Degutis recalls.

Trakai next in line

“The latter site was nominated by as many as eleven countries,” Degutis notes.

Lithuania has officially expressed intentions to have Trakai included into UNESCO registry.