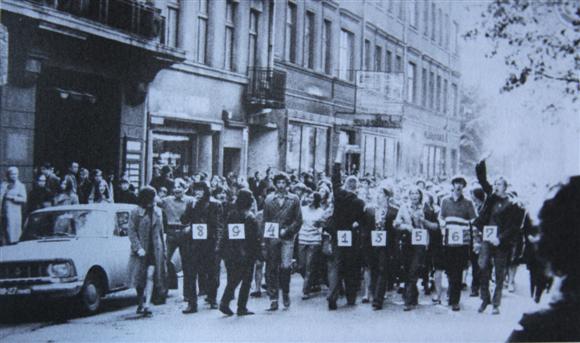 Nuotr. iš knygos „R.Kalantos auka“ / Romas Kalanta's self-immolation sparked protests in Kaunas.
Source: BNS
A year after Romas Kalanta's self-immolation for Lithuania's freedom in May 1972, the Soviet government in Kaunas, Lithuania's second largest city, was in fear of new anti-Soviet protests and tried to prevent them by involving militia and teachers, a US diplomatic cable shows.

The contents of the telegram was published in a new WikiLeaks database allowing to search documents dated 1973-1976.

"During May Day visit to Vilnius, embassy military attaché was told by local Lithuanian lawyer that precautionary measures already undertaken in Kaunas in anticipation of another flare-up of anti-Soviet demonstrations on May 14, the first anniversary of the self-immolation in Kaunas of 19-year-old student Romas Kalanta," a cable sent on May 3, reads.

The Lithuanian lawyer also told the member of staff of the US embassy that not only militiamen were patrolling "but also school teachers are being used to diffuse anti-Soviet feeling before it flows into the streets."

Based on the document, the Soviet official also stressed that the protests in 1972 were a "purely political phenomenon" and not a religious one. He also said that the Kaunas protests were very embarrassing for the then Soviet leader, Leonid Brezhnev.

Commenting on the meeting, the American official said he found the story plausible.

"While we have no way of judging reliability of Lithuanian source, whom milatt met in hotel dining room, we find story plausible, given the level of difficulties in Kaunas last May," the US official wrote.

Kalanta self-immolated in Kaunas on May 14, 1972, in protest of the Soviet occupation.

Following his death, youths in Kaunas held a demonstration. The anti-Soviet unrest in Kaunas was one of the largest-scale manifestation of discontent in the Soviet Union. Local authorities involved not only militia but also paratroopers and security forces to crack down on protesters.

The news of civil unrest in Lithuania spread in the West and among Soviet dissidents despite attempts by the Communist Party and the KGB to prevent it.

Kalanta was posthumously awarded with a 1st degree Grand Cross of the Order of the Cross of Vytis.

On Monday, WikiLeaks launched a new database containing 1.7 million documents from the U.S. State Department that were declassified but were difficult for the public to access. WikiLeaks is calling the searchable collection the “Public Library of U.S. Diplomacy," bringing together diplomatic and intelligence documents that previously could only be accessed through the National Archives. Now documents can be searched by using keywords.