Spain's ambassador to Lithuania Miguel Arias Estévez likes everything about his host country: the food is good, people are friendly, and the climate is perfectly bearable. The ambassador particularly enjoys walking in Lithuania's green forests, something that cannot be found in Spain.
Justinas Šuliokas
Source: 15min 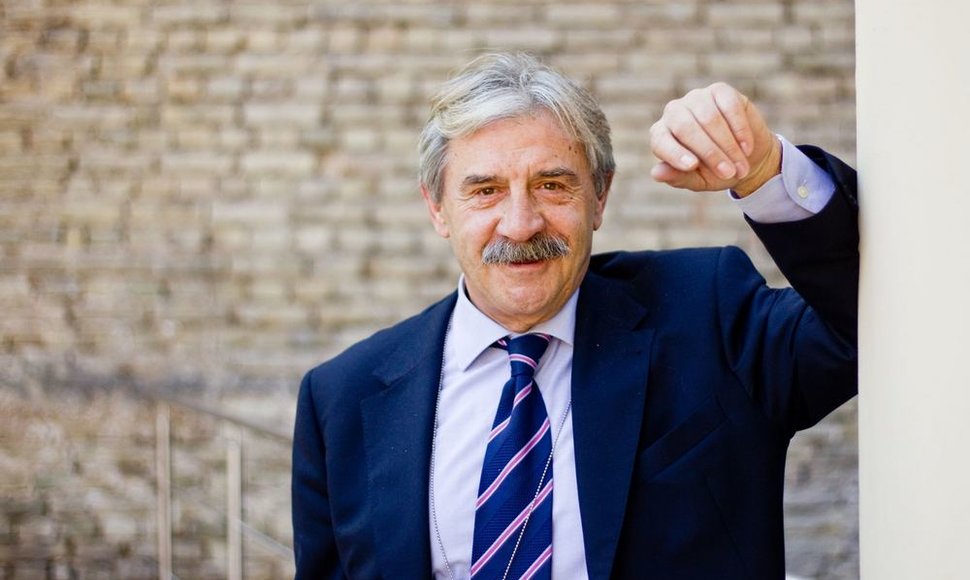 The ambassador, who has lived in Lithuania for over a year, says it has a lot of things in common with his native Spain, the most distinctive of which might be a rather recent experience of non-democratic regimes. “No matter if it is a right-wing dictatorship or a left-wing dictatorship. What counts is the lack of liberty,” Mr Estévez says.

He praises Lithuania for its successful transition to democracy, adding that there are still areas that require some work in order to meet the highest European standards – like women's and LGBT rights. “The European Union is also a community of values and there should be also a convergence in this aspect,” thinks the ambassador.

“Six or seven years ago, I was working in UNESCO,” Mr Estévez starts the conversation about  Lithuania. “There was a meeting here, in Vilnius, of the World Heritage Committee, so I came here for a two-week period and was very pleased with what I saw. So I decided that if I had a chance to come here for a permanent position, I would take it and that's what I did. So when I came to Vilnius as an ambassador of Spain a year ago, I was already convinced that I was coming to a good place. And the reality has proven me right.”

- You must have already experienced the Lithuanian winter?

- Lithuanians, too, are often said to be rather cold people.

- I wouldn't say so. Of course, they have more reserve than people from Spain, but as a matter of fact, I find Lithuanian people very open, at least when it comes to social relations. Don't think that South Europe is very different – southern people are very open, of course, and they will get on good terms with you, but it is not so easy to enter their homes. Or even if you do get invited , it would be just on special occasion. I love Lithuanian people. Compared to other countries – which I will not name – Lithuania is a very open country.

- Have you tried Lithuanian food?

- Yes. I have and I like it. The only problem is that it's very fattening and I have to take care of my weight. In that respect, the Mediterranean diet is better, I would say, but the taste of Lithuanian food is very good – puiku. Skanu. My favourite dishes are cepelinai and mushroom soup, grybų sriuba.

- Have you tried making cepelinai yourself?

- No, not yet. My Lithuanian cook makes it for me and she's really good, I will not compete with her. I like to cook, but I usually make Spanish dishes.

Making cepelinai seems a lot of work, but the taste is good, I like it. It's not food for every day. But it happens everywhere – I think that traditional cuisines were designed to help resist cold weather and work all day in the fields. And when you are a civil servant and you have to work at a desk, when you have air-conditioning in summer and heating in winter, you don't need all this intake of calories. Mediterranean food is healthier then.

- Lithuania is a basketball country, while Spain has done excellently in both football and basketball championships. Which sports do you like?

- I'm  not a big fan of football or basketball. I like to watch a match from time to time, but I prefer doing sports myself. When I was in my teens, I used to swim in competitions, then for a while I did gymnastics, later I did bodybuilding and then, in my 50s, I used to play tennis a lot.

I remember when I was 15 years old, I went out of my country for the first time and I had to ask for an exit visa. I had to go to the police, get approval, just to be able to leave Spain.

Just ten days after I came here, our national soccer team came to Kaunas, it played and won against the Lithuanian national team. And then I had the chance to watch Eurobasket. A final match between Lithuania and Spain would have been wonderful, it's a pity it did not happen.

Lithuanians are really crazy about basketball, but it is a good thing. When you see that all small children are in some way thinking of basketball and playing it, this is great. Doing any sport, especially basketball, is much better than playing on playstation and getting fatter from eating cepelinai.

- When you want to acquaint yourself with the Lithuanian culture, what are your usual sources? Do you read books or go to theatre?

- I would love to go to theatre – I love theatre and I used to act as a university student. I've seen some plays and I am studying Lithuanian, but I'm not at the point where I could understand a piece. Although I enjoy very much when I hear people reading poems or doing plays on the radio. Even though you cannot understand all the text, but you can differentiate sensations and emotions. I think that theatre in Lithuania is very good.

Another thing that I love very much in Lithuania is music. I was not that much familiar with Lithuanian composers but here I have listened to Čiurlionis' works and they are very good. And so are your players and musicians. I've also discovered Dvarionas.

- Are there any striking difference between Spain and Lithuania?

- Of course. Very pleasant ones. The forest – the green of the fields. Coming from Spain, where only the north is green and with forest, while central parts and the south are rather dry and arid, walking through the forests and fields here is just a pleasure.

I was surprised by mosquitoes in summer which I did not expect. I though it was too cold for mosquitoes, but there are plenty. And ticks in the forests – I have dogs and, during summer, they get plenty of ticks.

- One of similarities between Lithuania and Spain is that both countries have relatively recently made a transition from dictatorship to democracy. Were these comparable transitions?

- Yes, of course. Living in a system that does not allow freedom is very similar. No matter if it is a right-wing dictatorship or a left-wing dictatorship. What counts is the lack of liberty. I remember when I was 15 years old, I went out of my country for the first time and I had to ask for an exit visa. I had to go to the police, get approval, just to be able to leave Spain. This probably reminds of the situation in Lithuania. Both were political systems in which human rights and fundamental freedoms were not respected, and they are very important.

- How successful was this transition?

- Very successful, I would say. And it happened in a very short time. Franco died in 1975, and we got our first constitution at the end of 1978 – three years later. But then we had to put everything in practise, we had an attempted coup d'état in 1981. I would say that, in my country, the transition period lasted from 1975 to 1982 or so, that means 7 years. Here, seven years after 1991 was 1998, when you were about to enter the European Union. The convergence to the European standards will take longer, of course, but it is so in any society.

- Which standards do you think still need some work?

- Speaking of that, it's interesting that Spain is a Catholic country and is one of the states that have introduced same-sex marriage, whereas in Lithuania, Catholic tradition is quoted as an argument against tolerance for sexual minorities.

- Yes, we've had same-sex marriages for 7 years now. According to the latest statistics I've seen, there have been around 30 thousand same-sex marriages. Of course, Spain has always been a Catholic country. People feel and declare themselves catholic, but in their everyday life they possibly follow another pattern of conduct. This could be an explanation.

In Spain, the Catholic Church is, of course, an important social agent. So there has been a change in the society. For example, when the same-sex marriage law was passed in Parliament, polls suggested that 65 percent of the population was in favour, which is a very high percentage. And about 57 percent also approved of adoption rights for homosexual parents. You cannot say that Spain is not a catholic country, but then it shows that ordinary people can reconcile these two things – being catholic and at the same time socially liberal.