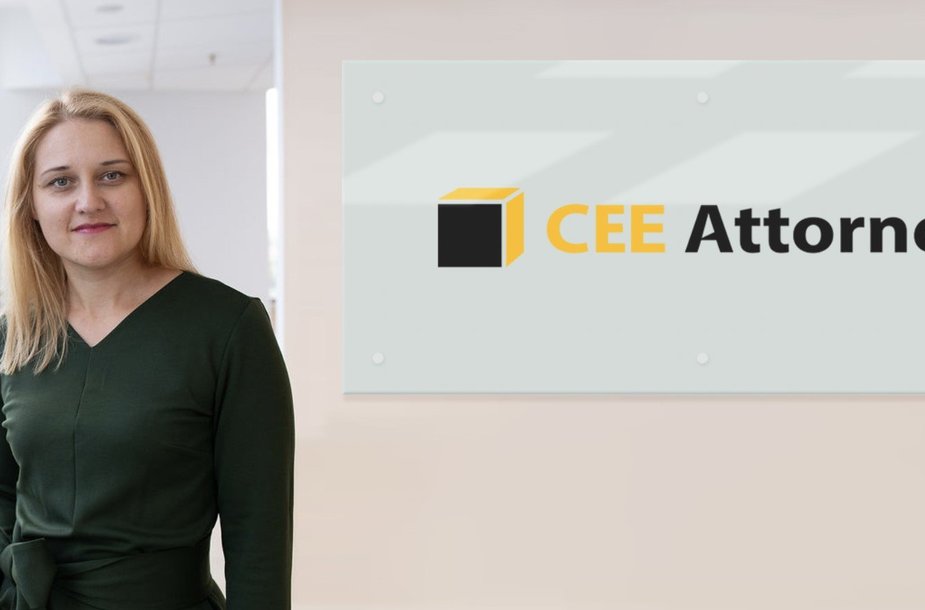 CEE Attorneys, an international law firm which brings together 16 legal professionals in Lithuania, has a new partner. Kristina Sabaliauskienė has become the firm’s third partner in Vilnius office, having previously led the CEE Attorneys Vilnius Real Estate and Construction Law Practice Group. For a number of years, this practice has been recognised by The Legal 500 as one of the leaders in Lithuania in terms of experience and competence.

This is a new stage in the development of the firm which has been led by the co-founding attorneys-at-law Daina Senapėdienė and Inga Kostogriz-Vaitkienė for the past five years.

According to managing partner D. Senapėdienė, since its establishment, the firm has increased significantly – from two persons to a team of twenty people. This year has also witnessed continuous growth. “Our client portfolio has increased by around 30% and this was partly driven by the need for prompt resolution of staff migration and business transfer questions. We also experienced rapid growth in the real estate sector. The scope of this practice increased by a fifth this year. Alongside this, we also expanded our capacities and reinforced our professional competences in areas such as litigation and arbitration, corporate, real estate and construction law practices, with new specialists coming on board. All these changes have prompted the need to expand our management team, too.

We value both Kristina’s professional competences and her leadership skills which were demonstrated perfectly through her development of the firm’s third-largest legal practice. As a team, we have even more ambitious development plans in mind. So we are pleased that our leadership ranks will include another strong member who is motivated, determined and is prepared to go the extra mile in order for the whole team to move forward in the direction we’ve set for ourselves,” D. Senapėdienė says.

Founded in Lithuania in 2012, the law firm became a member of the CEE Attorneys International in 2015. Nine of the network’s offices and accredited partners operate across sixteen countries in Central and Eastern Europe, as well as China, Japan and India. This year saw the joining of Croatia as well.

Kristina Sabaliauskienė, who has more than ten years of legal experience, has been working at the firm for the last four years. Prior to joining it, the attorney-at-law worked for the real estate development company Hanner. As an independent legal expert, Sabaliauskienė has also consulted various developers on real estate issues (including rental, construction and contracts) in Lithuania, Romania, Ukraine, Belarus, Russia and Latvia. Her clients include the real estate development and construction companies Sweco Lietuva, Citus, Ombergas, Mosta, Eriadas, as well as Experimentica, Saybolt-Baltija and others. Among her most noteworthy professional achievements are her legal services provided to Hanner in purchasing the territory of the Žalgiris Stadium for 41 million euro and later resolving a dispute with the National Land Service around the territory’s development. She has also provided legal advice to AJ Projektai when the company purchased the 3,100 square metre business centre in Vilnius’ Goštautas street 40, while this year Sabaliauskienė consulted a Ukrainian investor regarding the construction of a new factory in the Kėdainiai Free Economic Zone. Kristina Sabaliauskienė was recognised this year by The Legal 500 as a Next Generation Partner in real estate and construction law.

The attorney-at-law actively participates in forming the sector’s regulatory framework and is a member of the LNTPA working group, which had initiated proposals for changes to the land law. Together with her colleagues in this working group, Sabaliauskienė was also involved in discussions on rental compensation support measures for companies that have suffered due to the lockdown restrictions.

Kristina has represented clients in four out of seven public-private sector partnership projects conducted in Lithuania and two of her clients became winners during the first stage. She also consults on company mergers and acquisitions, represents clients in disputes alongside colleagues working in the firm’s other divisions.

Among the most significant projects handled by the firm this year was the legal assistance provided to a supplier in public procurement when signing a 28 million euro contract with the Lithuanian Inland Waterways Authority regarding water flow regulation constructions in River Nemunas, a major merger deal between two holdings companies in Lithuania and Cyprus. In addition, a much-needed new legal practice in e-commerce was formed during this period after winning a case on what should be considered the appropriate introduction of consumers to the terms and conditions on purchasing goods online.

As in previous years, various international projects, where the Lithuanian law firm collaborates with their partners abroad, have also played a significant role in its growth. Daina Senapėdienė estimates that these projects made up almost one-third of their portfolio this year. “Our team offered legal counselling for clients investing in venture capital funds and establishing companies in the US as well as Cyprus and the United Kingdom. We also assisted in resolving share transfer and options matters in Thailand and Poland, drafting shareholder contracts in Hong Kong, as well as numerous other projects in Latvia, Estonia, the Czech Republic and the Netherlands,” says Senapėdienė.

“We are a new generation law firm, which started only a few years ago and based its journey on in-house lawyers experience. Today, our competence is being noted by international law directories. Based on the data of the Financial Analyst Association’s deal register, in 2019 we were among the top ten most active firms in M&A in Lithuania, more than once forming precedents in public procurement court practice. We are also setting the tone for the fintech industry as a co-founder of the first fintech cluster BCCS. We have achieved all this by being ambitious, focused and having the courage to act and make progress. I believe that our success story and our development will help demystify the added value of large firms, which are often viewed as a temporary stop on the road to success by people who aspire to eventually set up their own practices. I truly believe that the story of CEE Attorneys could be an inspiration for other players within the market,” says the managing partner at CEE Attorneys.