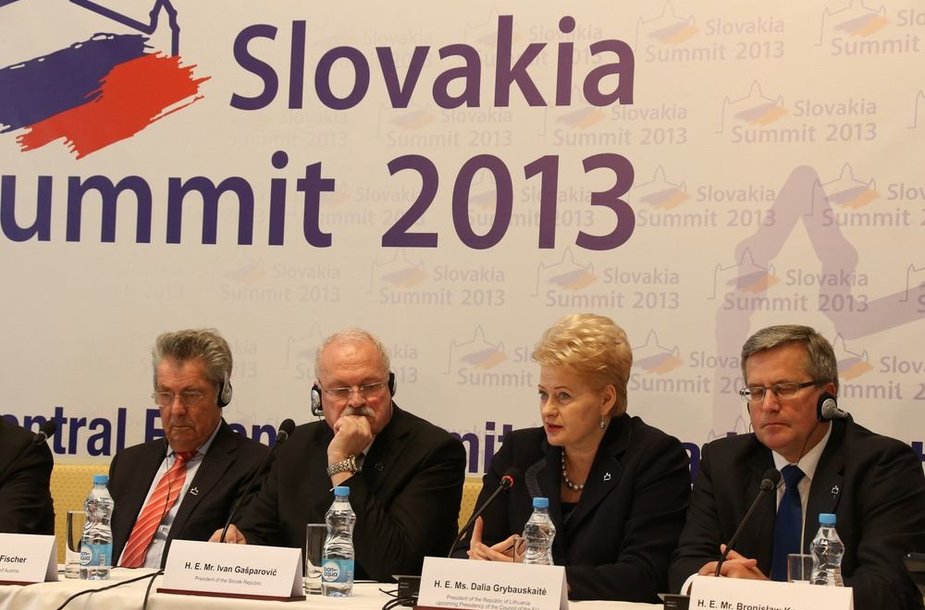 "Lithuania and Slovakia are small and very similar countries. It is not so long ago that we fought for freedom, and now we are united by common experience in seeking the well-being of our nations and Europe as a whole. Positions of the two countries on tackling the issues of economic and financial stability fully coincide. We are reliable allies, sharing western democratic values," the president said.

According to a statement by the Press Service of the President, the presidents discussed the situation in Europe, the overriding tasks of Lithuania's Presidency of the Council of the European Union, the importance of society's involvement in consideration of the EU matters, and shared experience of presidency preparations. Slovakia already starts preparing for its Presidency of the EU Council in 2016.

Gybauskaitė named the completion of negotiations with the European Parliament on the multiannual financial framework for the period 2014 - 2020 as one of the key objectives of the Lithuanian presidency. She pointed out that for the EU's financial support - important to the economy of each member state - to reach all member states in time it is necessary to find consensus as soon as possible.

The Lithuanian EU presidency will also pay special attention to youth employment. This is an important issue for Lithuania and Slovakia, with youth unemployment rate of 34.5 percent - one of the biggest across the EU - in Slovakia, and 22.7 percent in Lithuania. According to the Lithuanian President, the new EU budget foresees six billion euros for Europe' youth employment program, therefore in the forthcoming half-year, fast and effective ways will be sought to implement them.

During its presidency, Lithuania will seek progress in building a banking union as it is important for ensuring the financial stability in Europe. Slovakia, which joined the euro zone in 2009, supports the idea of the banking union and eurozone's centralization.

The presidents further discussed the economic situation in their countries and shared experience in dealing with energy issues. Slovakia, much like Lithuania, is dependent on a single supplier of gas and electricity and is also exploring alternative energy sources in order to secure diversified supplies. Gas and power interconnections with Hungary and Poland are planned, with particular focus on nuclear energy. At present, four nuclear reactors are operating in Slovakia and the construction of two more is underway. Creation of the EU's single energy market and elimination of energy islands will also be among the core works during Lithuania's presidency.

The meeting between the presidents of Lithuania and Slovakia also touched upon the EU's Eastern Partnership Summit to be held in November in Lithuania. This highest-level political event is very important for the whole European Union, the President noted. During the summit, it is expected to sign association and free trade agreements with Ukraine and to consolidate the achievements of other Eastern partners in instilling and implementing European norms and values. Dissemination of European values, according to the President, will serve to ensure the growth of a strong and credible Europe. Safe neighborhood is crucial for the people of both Lithuania and Slovakia.