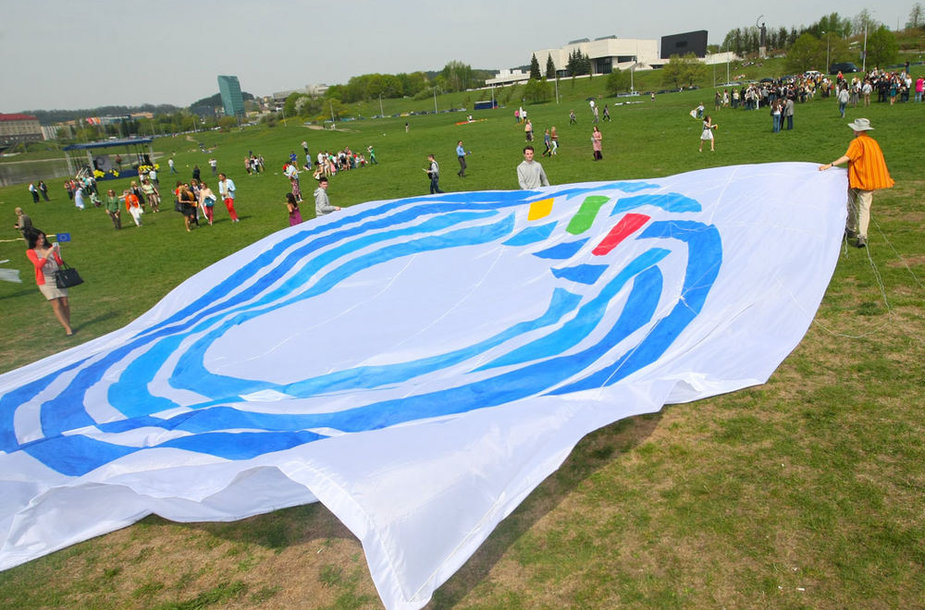 Juliaus Kalinsko / 15min nuotr. / Renginio akimirka
Source: BNS
Lithuania's presidency over the European Union (EU) Council will be symbolized by a logo of a blue circle with a string of the colors of Lithuania's national flag – yellow, green, and red.

The logo was officially presented to the public on Friday. A huge kite with the logo was flown in central Vilnius.

"We have practically started the presidency today already, with our kite," she told journalists.

"The string symbolized fortitude, and cooperation and pulling ourselves together, everything in one. So we are presenting our logo to Europe, wish it and all of us together, Lithuania and other countries, success," the president said.

Spokeswoman of the EU presidency in Lithuania, Rasa Jakilaitienė, says the circle stands for unity, which shows that Lithuania will aim to be an honest mediator seeking to harmonize interests of all. In her words, blue stands for Lithuania's links with countries of the Baltic Sea region and the Nordic states, while the string symbolizes Lithuania's determination to take responsibility.

"The circle is connected by the string of yellow, green, and red, which means that Lithuania is taking full responsibility for presidency over the EU Council," Jakilaitienė told a news conference on Friday.

The logo was authored by Kotryna Žilinskienė, with the initial idea proposed by Simona Mykolaityte.

"This logo symbolized Lithuania's harmonious being together with other countries and the exceptional occasion of Lithuania's presidency," Žilinskienė told BNS.

Lithuanian will take over the EU presidency on July 1.