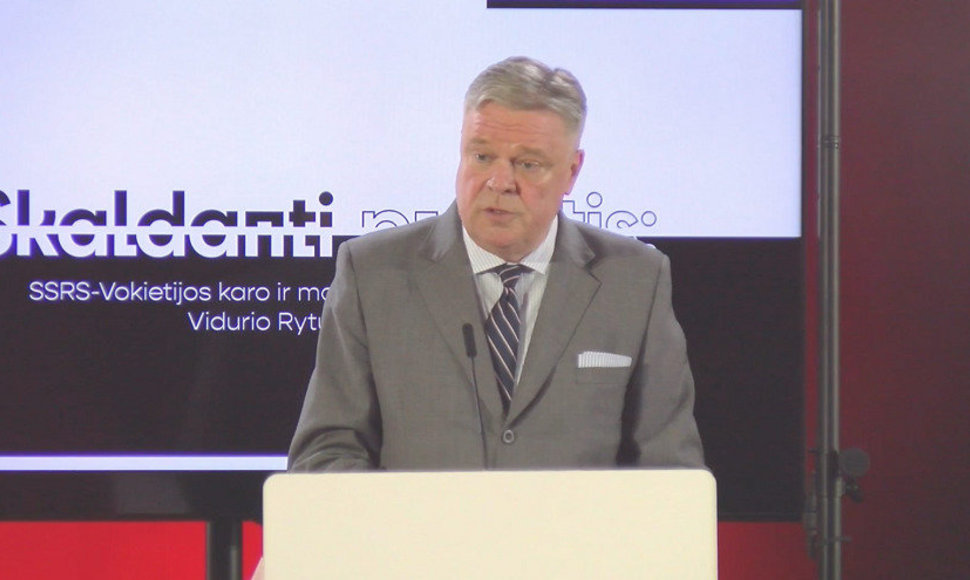 “Deep is the well of the past”, sighs Thomas Mann – the first words of his magnum opus “Joseph and his Brothers”. He goes on to tell us a biblical story. Exodus, a tale of the people of Israel in foreign captivity.

Mann was writing this story 80 years ago. Overlooking the Pacific Ocean from his own (rather comfortable) exile in California, did he sometimes think back to his family’s beautiful, lost holiday home in Lithuania, on the Curonian Spit? I find it hard to imagine otherwise. This political refugee from the Nazi regime would not have chosen his subject – this subject – coincidentally. Of course he was thinking of what was going on in Europe.

By June 1941 Nazi Germany had already overrun much of the continent, like a biblical plague, and the “Magician”, as Thomas Mann was often labelled in his lifetime, knew better than most what this would mean for European Jewry. By 1942, when “Joseph and his Brothers” was published, the Shoah was already burning through human beings, communities and countries at full force.

Eighty years ago this month, in June 1941, the Nazi German plague overwhelmed Lithuania as well. That is why the German ambassador needs to speak here today. I am grateful for the opportunity. I am here to encourage Lithuania. For courage, and persistence, are indeed what will be needed as Lithuania sets out to look straight into the mirror of those years of genocidal horror, 1941-44.

Believe me, we Germans know how hard it is to hold the distant mirror steady. We also know that it is existentially necessary. It took us Germans forty years after World War II ended to establish a clear and straightforward understanding, for ourselves: that historical responsibility is always collective, and always timeless (this distinguishes it from guilt, which implies an element of personal involvement). Our nation’s very continuity, being collective and impersonal by nature, makes historical responsibility abide. Then, now, and in perpetuity.

It follows, inescapably, that wherever the mass murder of the European Jews was committed, and regardless of any degree of local complicity the Nazi occupiers may have found, these unspeakable acts of barbarity remain the crimes of Nazi Germany. Genocide was a core intent of this war of aggression, driven by racist ideological delusion.

That is my first main message here today: nothing this conference may discuss could either add to or detract from the abiding German historical responsibility for the Shoah.

What, then, does that mean for Lithuania’s historical responsibility? Is the German experience ‘relevant’ here? After all, there is a clear contrast. Germany had allowed the Nazis into power, to take over its institutions and destroy its democracy, and then almost all of Europe’s. Lithuania, on the contrary, had not chosen to become part of the ‘Bloodlands’, as historian Timothy Snyder has named them. Far from it: that is actually another part of Germany’s responsibility. It was Nazi Germany that had delivered Lithuania under Soviet occupation with the Hitler-Stalin pact in 1939. Your old and proud nation’s ability to act as a sovereign state, with corresponding responsibilities, became suspended. Lithuania of course still existed as a nation; but it could no longer act to protect all its citizens’ lives and rights – a situation that was only exacerbated by the Nazi German occupation less than a year later.

To acknowledge this expressly is my second main message here today. That is another part of my country’s abiding historical responsibility.

You are all engaged in the task of dealing with this terrible history. That requires courage – and I have no doubt that Lithuania will continue to demonstrate such courage. She already did so in March 2020, when the Foreign Ministry held an excellent conference on “Dealing with the Trauma of an Undigested Past”, examining how collective trauma can influence memories and narratives of past horrors.

You are continuing that process. Now, you are exploring how there can be such diverging narratives amongst historians about a period that is, after all, exceptionally well-researched and documented already. I should not be surprised if, at the end, you may have to conclude that historians are subject to trauma just like everyone else – and just like non-historians, not all of them have the intellectual honesty and moral strength to face the horrors of 1941-44. It would mean that History, with a capital “H”, is no more “objective” or “scientific” in Lithuania than it is anywhere else. Because it can’t be. But it must be based on facts, and it should be intellectually honest. Like anywhere else. That is achievable.

If I am not entirely wrong, Lithuania in June 1941 was not the master of her own destiny. She was not a protagonist but was instead the object of overwhelming external forces. But what does that mean for today’s Lithuania – modern, democratic Lithuania? Independent, free, European and transatlantic Lithuania?

If Lithuania in June 1941 couldn’t act as a sovereign state, then does historic responsibility become nothing more than a collection of individual responsibilities? Each Lithuanian of those days, responsible for the way they behaved to their Jewish Lithuanian neighbours, their fellow citizens, their compatriots? Is it all a matter of individual interpretation of the indisputably awful facts?

Or is there something like a historic national continuity even where the nation’s polity, its state power, is temporarily impotent, or even entirely suppressed? Can a country that wishes to be understood as such, cherry-pick its history? Or does it need to take responsibility for the whole – the past, the present, and the future?

These questions, along with many others, are a heavy burden, which no one can take off Lithuanians’ own shoulders. But to the extent, any outsider can, Germany needs and wants to be your good companion in this venture. After all, it was Nazi Germany that exposed Lithuania to all of this. And so, I wish this conference every success.

I started with a piece of world literature. May I conclude with another? The English poet John Dunne wrote in the 17th century:

“No man is an island,

Every man is a piece of the continent,

A part of the main.

Any man’s death diminishes me,

Because I am involved in mankind.

And therefore never send to know for whom the bell tolls;

It tolls for thee.”

I know no better expression of the togetherness we need – as people, and as countries. Confronting our past, just as we stand together in our future.