Quarantine does not stop work: Labūnava agricultural company launches smart milking robots, the first of their kind in the Baltic States 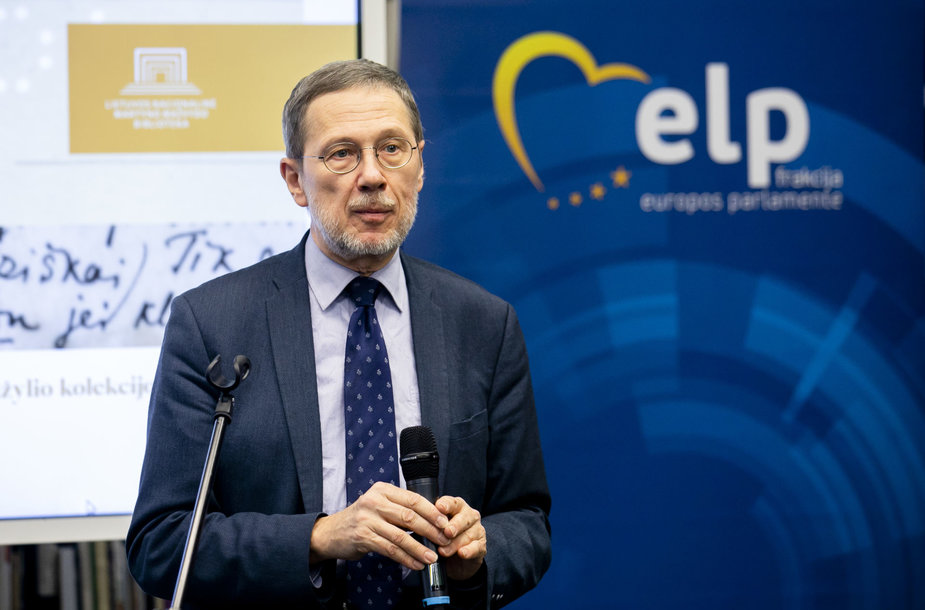 On February 20, the European Council sought to approve a position on the European Union’s Multiannual Financial Framework’s basic premises, based on which annual budgets would be compiled over the coming seven years. A decision, which will decide finances for the years 2021-2027, sees no agreement between neither EU institutions, nor EU member states.

On Thursday, the heads of all EU governments or states, European Council President Charles Michel and European Commission President Ursula von der Leyen sat down at one table to try and divide up a pie worth billions of euro. However, decisions will have to be made on not only who receives what slice, but also on the overall size of the budget. In 2018, the preliminary European Commission proposal was 1,134.6 billion euro – 1.11% of all EU countries’ GDP. For comparison, the 2014-2020 Multiannual Financial Framework, was comprised of 1,082.3 billion euro (1.16% of the EU’s GDP). Finland, which held the Council of the EU presidency at the end of last year, proposed another potential EU budget – 1,087 billion euro (1.07% of the EU’s GDP). Neither proposal matches the positions of the European Parliament – the parliament wants for the framework to be comprised of 1,324.1 billion euro (1.30% of the EU’s GDP).

You might think this sounds confusing? Everything becomes even more complicated when we start thinking about this EU term’s challenges and novelties. In December 2019, the European Commission presented the famous and ambitious European Green Deal, which will seek to cut carbon dioxide emissions (by 2030!) and climate neutrality in the European continent (by 2050!). One of the Green Deal plans is to reorient industry into modern clean and safe technologies by implementing a Just Transition Fund, which will cost 7.5 billion euro. This sum has as of yet not been included in the amounts mentioned above. What does this mean? Very simple – if we wish to accomplish all the new aims, we will have to shed certain old habits or in other words – cut financing for other current EU priority areas. However, the European Parliament disagrees with this situation.

Discussions continue between EU institutions because the Commission and Council proposals seek to reduce financing for cohesion and agriculture, whereas, at the moment, the Parliament maintains clearly its position on seeking to keep these areas at the same level. It must be mentioned that certainly not all EU countries want to increase the budget, while 17 states still expect EU support for social, economic and territorial cohesion and agriculture.

After Brexit, it is not only the EU’s GDP that decreases – one of the most important donor countries have withdrawn from the EU, one whose contribution to the union’s budget was among the largest. While proposals have been made to reduce the common budget of the 27 member states remaining after Brexit, major challenges remain the Green Deal, digitisation and the EU’s economic growth. All these areas are closely linked, but at the same time will also demand significant financial allocations.

When talking about the budgets proposed by the Commission and during the Finnish presidency of the Council of the EU, it should be noted that they feature Cohesion Fund reductions for Lithuania. In the Commission’s 2018 proposal, support for Lithuania is an entire 24% lower than during the previous framework period, while Finland proposed even deeper cuts – 27% reduction.

Yes, it is necessary to note that Lithuania, as a cohesion country, is definitely growing and certain cities have already reached the EU average. For example, based on the Commission’s data, the Vilnius city region’s GDP reaches 112% of the EU average. But you know, this is the same as perceiving Vilnius as our entire country and predicting election results based on reactions on Facebook. The situation is far more complicated, which is something our Presidential Palace emphasises. At the start of this month, when talking about EU support, President Gitanas Nausėda’s advisor for economics and social issues Simonas Krėpšta mentioned other Commission metrics – in the rest of Lithuania, the same GDP per capita is only 65% of the EU average. These are numbers, which reflect massive social and economic segregation. How should one of our country’s greatest wounds be treated? One long term treatment is continued targeted EU investment.

Last week, President G. Nausėda met with European Council President Charles Michel to discuss Lithuania’s position on the Multiannual Financial Framework. Based on the Lithuanian president’s comments following the visit, it seems that the conversation went well, and this is a positive indicator. We know Lithuania’s priorities quite well ourselves – we repeat that direct grants for agriculture should be equalised at the EU average. Of course, the position was expressed on Cohesion Fund financing, which is particularly important for investment into the regions and their growth. It is laudable that Lithuania’s position was presented in the EU’s strategic agenda – on climate change, innovation while emphasising our country’s preparedness and willingness to contribute. At the same time with the understanding that this is not a single individual’s strategy, but a goal held by all of us, one that is important to every EU state. After all, the planned long term EU Budget is not just about supporting countries – at the same time, it is the aim of accomplishing global goals. It is good that the possibility of contributing to the EU’s future strategic goals was also perceived from the Lithuanian perspective. Beyond the matters mentioned above, the president and Charles Michel also discussed funding distribution for one of the largest scientific research and innovation programmes Horizon Europe, EU commitments for financing the closure of Ignalina NPP, the efficiency of the Kaliningrad transit scheme, border control and European neighbourhood.

No calm at the EP

European Parliament President David Sassoli warned the member states’ governments last week at a press conference after discussions in the parliament regarding the EU’s Multiannual Financial Framework that the EP will not support any agreement, which would terminate core programmes, which Europeans are employing already. To note, the EP can approve or reject the decisions made by the European Council around February 20; however it is already sending signals and exerting pressure for the budget to reflect the needs of Europe better, Lithuania included.

D. Sassoli disagrees with the current budget proposals prepared by the Commission and Council, which seek to reduce cohesion financing, as well as that for agriculture, defence, infrastructure and space programmes. According to the Parliament’s president, these are not just abstract numbers – they have real consequences for the lives of all Europeans and invite to think twice about funding reductions to programmes such as Erasmus+ or measures intended to protect our borders, as well as how these reductions would impact the successful development of EU states.

At the same time, the Parliament’s president highlights that to become the first climate-neutral continent, we need unprecedented changes to our economies and societies. D. Sassoli emphasises the necessity to ensure that workers and all those, who are most impacted by these changes, mustn’t be forgotten. Regarding the Green Deal, the EP president called on strengthening the Just Transition Mechanism Period proposal. I agree with D. Sassoli, we cannot allow our struggle against climate change to lead to increased inequality in both Europe and Lithuania. Facing challenges, the EU must be wary and carefully consider all its investment. Mainly when the United Kingdom no longer contributes to the joint cake baking.

Thus, the European Parliament’s position is very clear – it calls on to not only not reduce currently financed areas, but at the same time also increase the EU Budget because it will be needed to achieve the ambitious planned goals. The EP president raises questions of the EU’s own resources and reminds that the budget must be sustainable.

Without a doubt, all these thoughts urge EU member states and the European Council to give take some time to think, how the budget must span not only individual countries’ wishes and priorities, but at the same time we must also resolve global challenges. As such, increased investment into the future is a must so that the EU wouldn’t lose its positions in geopolitics and in the areas of global economics, sustainable development and others.

European Council President Charles Michel released the “conclusions project” last Friday regarding the 2021-2027 budget and EU resource reform. Here one can observe that it features a budget level, which neither matches the Parliament nor the Commission’s proposals. An entire 46.3 % cut the Cohesion Policy Fund! Also, the budget cuts in the Council’s project does not leave agriculture unscathed, which sees cuts of an entire 14%, which is completely unacceptable. In this respect, I unambiguously support the Parliament’s position that we cannot yield and it is crucial to seek to retain realistic financing levels in the budget.

The current Council project clearly shows sizeable decreases to the funding of defence, Erasmus+, the unified market and other programmes. We can note that the 7.5 billion euro needed for the Just Transition Mechanism are assembled by downsizing various others of the EU’s activities. This clashes with the EP’s firm position that the new priorities should be funded from new funds. Nevertheless, Parliament seeks a binding direction for obtaining extra resources. Despite the EP’s wishes, five member states are offered to be given one-time adjustments (“discounts”_, which would allow the wealthy EU member states to regain their budget contributions. I repeat, the European Parliament should be united and firmly declare its discontent and disappointment with President Charles Michel’s proposal because otherwise, risks could emerge for the EU’s activities in critical areas.

While awaiting fierce debates between the member states, the EP must stand firm and defend its position. Only this way can EU member state leaders hear our voice. Namely, the EP must take a principled stance and declare that it is disappointed with Charles Michel’s proposal. We must inform the public about the Council’s current proposal, which will impact all of Europe’s ability to implement its policy and perform prior commitments. That’s not to even talk about investment in the future – from academic research to digital innovation and such.

As a member of the European Parliament, who will also be voting on the Multiannual Financial Framework, I believe that the MEPs’ opinion on the questions mentioned above is justified. A variety of challenges await the EU and its member states over the coming seven years and they can more effectively be overcome in unison. For all these efforts, we must have European level financing. The Parliament is not planning to change its position, and thus together with the other MEPs, I hope that we will come to hear positive news. I do not doubt that agreement must be found because “more time” would yield more space for politicking and various doubts.