Balance in treetops at Europos Parkas

While the movement of people and the number of those employed is rising in the country, not only in Lithuania but in all the Baltic States, the coronavirus pandemic is beginning to fade. Estonia and Lithuania are currently faring the best, lately having only 3-5 new infections per million capita every day, scientists at the Lithuanian University of Health Sciences (LSMU) and Lithuanian Energy Institute (LEI) noted.

Latvia has also thus far been able to handle the pandemic well – over the past two weeks, its number of COVID-19 infections has ceased decreasing and is at around 4-5 new infections per million capita every day.

The peak of new infections per million capita per day, based on weekly averages, was 20 in Lithuania, 18 in Latvia and 45 in Estonia. 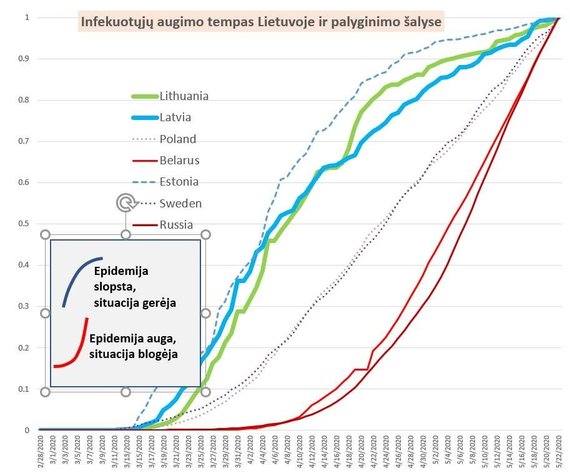 Sweden, which applied far more relaxed restrictions during the pandemic, is in a somewhat different situation – the number of new infections is gradually stabilising, but the outbreak has not been contained. For six weeks now, the outbreak in Sweden is not decreasing and fluctuates at around 50-60 cases per million capita every day. In Poland, a peak appears to have been reached as well, with 8-10 new cases per million capita every day.

LSMU and LEI scientists have also studied how the disease would have developed in Lithuania, had we applied approaches used by other countries. It was noted that Sweden’s scenario would have been the least favourable of Lithuania before, but now – the Belarussian scenario. According to the researchers, it is likely that the situation was worsened by the parades organised in Belarus on May 9. If Lithuania had celebrated the day as Belarus, today we would have around seven times more infections.

While Belarussian and Russian data is not accurate, considering COVID-19 deaths, these countries are nearing Lithuanian levels. Based on mortality indicators, the Swedish scenario would be the least favourable for Lithuania, given it, we would have an entire 1049 coronavirus deaths.

LSMU and LEI scientists, as well as members of the public group www.united4health.lt, are performing epidemiological monitoring of the COVID-19 infection’s spread in Lithuania and the newest modelling and forecasting results are released on the website https://lsmuni.lt.