Lithuanian basketball fans condemn racism, yet say they were misunderstood by London police 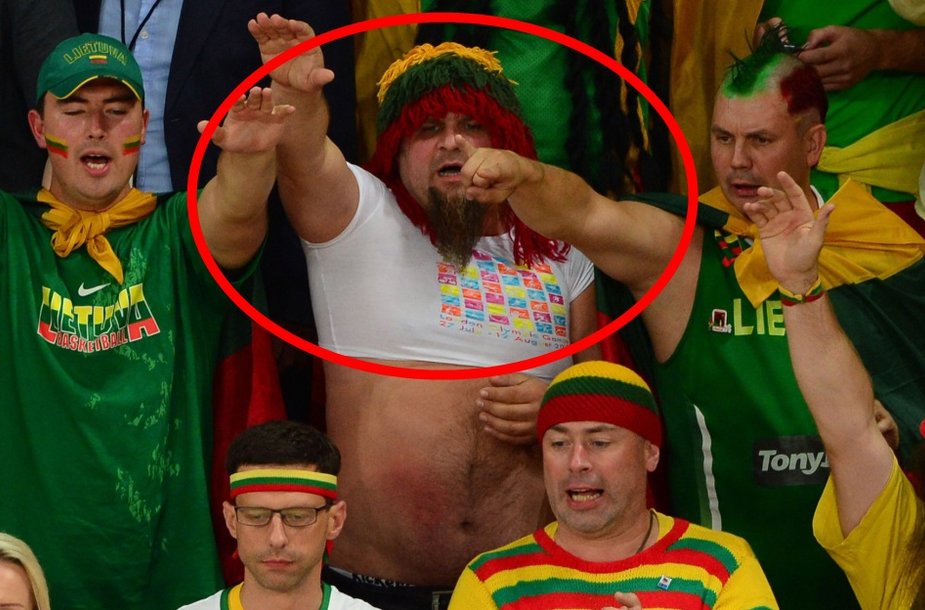 AFP/„Scanpix“ nuotr. / Petras Leščinskas was fined for racist gestures and chanting in London Olympics.
Source: BNS
Fans supporting the Lithuanian men's basketball team during the Olympic Tournament in London have said that the British law-enforcement misinterpreted their chanting when they accused one of them of racism.

In a media report, the fans said they strongly condemned all forms of racism or discrimination based on skin color, race, sexual orientation, or religion.

"Historically, Lithuania has suffered at the hands of brutal and fascist regimes in the form of both Nazi Germany and the Soviet Union, and its people fully understand the horrific pain and psychological and lasting damage of ethnic discrimination," reads the English-language communiqué.

"The incident on Tuesday, in which one of the basketball team's traveling supporters was arrested, was totally regrettable and has sent shock waves throughout the tiny nation, with its people in total disbelief at such an accusation being leveled at one of their own," the fans said.

"However, the gesture and chanting of this fan and all others was totally misunderstood and misinterpreted by the undercover police officers who made the arrest. The gesture in question – the raising of one or two hands up after clapping in this manner – is a gesture commonly used in Lithuania at sports events and is in no way meant to represent a Nazi salute. Indeed, the very thought of it doing so is totally abhorrent to the Lithuanian supporters," reads the communiqué.

According to the press release, the 36-year-old fan fined for racist behavior plans to file an appeal. Furthermore, the fans accuse the police of mislaying or losing all of his personal belongings including ID, credit cards, cash, and a mobile phone.

The Lithuanian citizen was arrested during a Lithuania-Nigeria basketball match in London on Tuesday, and a London court imposed a 2,500-pound fine.

Lithuania's Foreign Ministry said the fine was imposed for offensive conduct, for making ape sounds and Nazi hand gestures along with other racist actions.

The fan told Lithuanian media he had been misunderstood.

A few days earlier, the British media published a photo from the basketball match between Lithuania and Argentina, showing another Lithuanian fan holding his arm up, in a Nazi salute-like manner, at two black stewards.

Diplomats working on the case

Lithuanian diplomats say they have made efforts to clarify the circumstances of the incidents during the Olympic Basketball Tournament in London when a fan was detained for racism, saying they are ready to provide assistance to Lithuanian citizens in the UK.

Lithuania's National Olympic Committee has launched a probe into the situation.

"The embassy's efforts to establish the circumstances of the incident produced no result, as it was impossible to receive information about the incident after working hours at the law-enforcement institutions in the United Kingdom," the ministry said in a response to MP Aurelija Stancikienė.

According to the press release, London police informed the embassy about the arrest of the Lithuanian citizen on charges of offensive words/conduct during the Lithuania-Nigeria basketball match, namely, Nazi hand gestures, ape sounds, and other racist actions.

"Please note that the United Kingdom applies 'zero tolerance' principle towards any potential racist action, and the principle is applied with utmost strictness during the Olympic Games," the ministry told BNS.

The Foreign Ministry also noted that the detainee did not exercise his right to approach the embassy for consular assistance.

"An appeal against the court ruling can be filed by the citizen, and it is the only legal way to revise or repeal it. Should the citizen appeal to the embassy or the Ministry of Foreign Affairs, we are willing to provide full assistance within our competences," the ministry said.

"Staff of the embassy have paid special attention to the case, the detainee's wife was notified of the actions taken by the embassy," the ministry said.

A report was published by the Lithuanian National Olympic Committee on Friday, saying it was working to establish all factual circumstances surrounding the incident.

"Please be informed that we are aware of the unpleasant incident and, in order to establish all factual circumstances, are in close cooperation with the Embassy of the Republic of Lithuania to the United Kingdom," the committee said in the press release.

According to the communiqué, a joint meeting of the embassy's staff and heads of the Lithuanian Olympic delegation is scheduled for Friday afternoon to discuss the situation.