Ažubalis in Jerusalem: Lithuania and Israel are similar 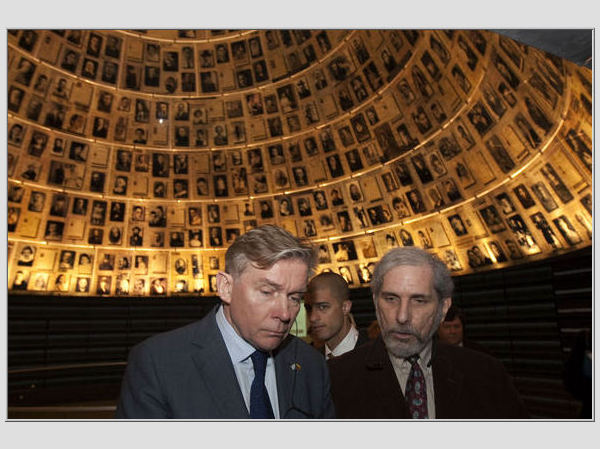 Ažubalis urged Israel to give international sanctions on Iran a chance, but at the same time said Iranian threats to “wipe Israel off the map” were unacceptable.

He also called for maintaining “a positive momentum” in the Israeli-Palestinian peace process that began in Jordan in January. He supports a Palestinian state created through a negotiated two-state solution.

Ažubalis hailed the close ties between Israel and Lithuania, and looked forward to the inauguration of direct flights between the two countries in June.

His first visit to Israel marked the 20th anniversary of his country’s relations with the Jewish state, a bond that he said grew stronger every year.

In 2011 alone, he noted, Israeli tourism to Lithuania grew by 62 percent, and his country’s exports to Israel increased by 54 percent. Israel’s leading pharmaceutical company, Teva Pharmaceutical Industries Ltd, has a manufacturing plant in Lithuania, and in the last three years, more than 20 bi-parliamentary and ministerial visits have taken place.

While acknowledging the difficult history of Jews in Lithuania, he said he saw striking similarities between his country and Israel today. In addition, he pointed out, many of Israel’s leaders, including President Shimon Peres, Prime Minister Binyamin Netanyahu and Defense Minister Ehud Barak, had “Litvak” roots.

“This is my first visit to this exceptional land,” he said. “Thus I am sincerely excited to express deep respect toward the Israeli people; to confirm Lithuania’s commitments toward immortalizing the memory of the past, and to deepen our special bilateral relationship... for a better future.”

- Are you concerned about an Israeli attack on Iran?

- A diplomatic solution and the strong pressure of the international community through a sanctions policy is the way to go.

At the same time, we recognize the danger for regional peace and stability if Iran does not suspend its enrichment-related activities and intends to produce nuclear weapons. Threats heard from Iranian leaders to wipe Israel off the map are not acceptable.

Lithuania supported the new EU package of sanctions on Iran, adopted by the EU Foreign Affairs Council in January. It was a very important step which clearly demonstrated that the EU is united and is taking the lead.

- Do you know of any current EU initiative to move the Israeli-Palestinian talks forward?

- Events in the region, including the Arab Spring, have an impact that needs to be addressed by substantial progress in peace negotiations which fulfill Israel’s need for security and the Palestinian Authority’s ambition for statehood.

The EU fully supports the Jordanian initiative in the framework of the Quartet statement [of September 2011]. Positive momentum should be maintained. Continued direct and frequent exchanges between the parties is needed for creating a conducive environment to start substantive negotiations.

- Does Israel actively turn to countries like Lithuania to go to bat for it during EU deliberations about the Middle East?

- Israel puts a lot of diplomatic effort into presenting, explaining and defending its position on the Middle East peace process not only within the EU, but in all international forums.

- Last November, Lithuania was one of only 14 countries to vote with Israel against Palestinian membership in UNESCO. Why did you take this stand? Has it created problems with the Palestinians and/or the Arab world?

- Lithuania supports a two-state solution, with a Palestinian state living side-by-side with a secure Israel. Regarding the vote at UNESCO, we considered the case in the broader context of the then-ongoing deliberations at the UN Security Council regarding Palestine‘s application for full membership in the United Nations and continued efforts by the Quartet to restart direct negotiations.

Lithuania would welcome the future Palestinian state as a member of international organizations at an appropriate time and under the right circumstances.

- Do you think Israel is treated fairly in the EU? How is your stance on Israel different from that of the EU in general?

- The EU relations with Israel are rich, diverse and valuable for both sides. The EU always recognized that Israel shares European values – democracy, human rights and fundamental freedoms. Lithuania values the work done by Israel, and it will continue advocating for the EU-Israeli relations upgrade along with other EU member countries.

- Why do you think that, in general, the former Iron Curtain countries that entered the EU have a more favorable view of Israel than “old Europe”?

- First, Israel, the Jewish people and Lithuania enjoy a very special relationship, which comes of a 600-year history of two nations living side-by-side. Lithuanian history and culture couldn’t be conceived without a colossal contribution of Lithuanian Jews – Litvaks.

Secondly, Litvaks have left an important and deep footprint in the history, culture, science and business not only in Lithuania, but also in Israel and in many other countries. President Shimon Peres, Prime Minister Binyamin Netanyahu, Knesset Speaker Reuven Rivlin, Defense Minister Ehud Barak, [former Supreme Court president] Aharon Barak and many, many other most prominent people and outstanding personalities who are recognized and respected all over the world belong to the same family – the family of Litvaks.

And finally, the present-day Lithuania, like Israel, is a young, dynamic country with much untapped potential. We seek a positive bilateral agenda for the benefit and well-being of our two countries and peoples.

- Why has maintaining strong ties been important for your country? What more can be done to improve those ties? How can Israel help Lithuania, and how can Lithuania help Israel?

- The ties are of exceptional importance. It is the solidarity in commemorating the great and the tragic pages of our past; and it is the belief that we can be very helpful to each other. I see trade, energy innovations, tourism, and policy coordination on different international platforms as the most promising areas for mutually beneficial cooperation.

We also do our best to ensure that the nightmare of the Holocaust, which was the greatest tragedy in our history, would be properly memorialized. In order to immortalize the remembrance of the Holocaust victims we actively promote Holocaust education and research. This is the right and the only path for building mutual trust, solidarity and true friendship.

And I have no doubts that our joint efforts will lead us to very positive outcomes – there will be more Lithuanians in Israel and more Israelis in Lithuania.

- Can you speak of future economic ventures between the two countries and the role start-ups can play in your country?

- We all admire Israel’s economic miracle, where a small country without natural resources produces more start-up companies than the world’s major economies.

I see a great potential for our countries’ common projects in this field.

We are glad to have in Lithuania one of the biggest companies of Israeli capital, “Sicor Biotech”/TEVA. It encourages the further development of the modern biotechnological pharmaceutical industry in Lithuania, which is one of the most important fields of the new economy. The company also encourages the development of such sciences as biotechnology and genetic engineering in the Lithuanian universities.

- How important is Israeli/Jewish tourism for Lithuania? What initiatives are there to increase such tourism?

- Lithuania and Israel are bound together by common history and culture. Therefore, tourists of our countries might be interested to travel not only for sightseeing, but also for cultural, historical and especially sentimental purposes. We have a unique heritage of Jewish culture and history; Vilnius was once even called the Northern Jerusalem.

We encourage our tourism sector operators to participate in tourism fairs held in your country and to propose attractive tourism packages for Israeli tourists. In 2011, the number of Israeli tourists traveling to Lithuania increased by 62 percent. This year, Lithuania has participated in the International Mediterranean Tourism Market in Tel Aviv.

I am sure that the opening of direct Vilnius-Tel Aviv flights in June will certainly boost tourism flows between both countries.

- You have supported the criminalization of denying communist crimes. Why has this been so important? Has this created tensions with the Jewish community in Lithuania and/or with Israel?

- On June 15, 1940, the Soviet Union annexed Lithuania, and Jews suffered along with the whole Lithuanian nation. Jewish religious and Zionist organizations, the Hebrew schools, newspapers and libraries with Zionist orientation were closed. Most owners of industrial and commercial enterprises were labeled “enemies of the people” and exiled to Siberia. A number of famous Jewish politicians and social activists found their way to the Gulags. Some of them were exiled before the mass deportations of mid-June 1941, when around 20,000 people were deported from Lithuania, a considerable part of them from the Jewish elite.

The consequences of both totalitarian occupations [i.e., the Soviets and the Germans] for the people of Lithuania were painful. That’s why the parliament of Lithuania took a firm stand to prohibit any totalitarian symbols – both Soviet and Nazi.

During the Second Soviet period (1944- 1990), many Holocaust survivors tried to emigrate to Palestine, later to Israel, the USA, Western Europe and other countries. Those Jews who stayed in Lithuania also suffered from Soviet repression and were persecuted for any attempt to join their people in Israel. So for many of my Lithuanian Jewish compatriots, who lived under the Stalinist regime at that time, it is understandable what this means.

Naturally there are some personalities who had another opinion – not only among Jews, but also among some Russians, Belorussians and even among Lithuanians, who actively collaborated with the Soviet regime and even now admire it.