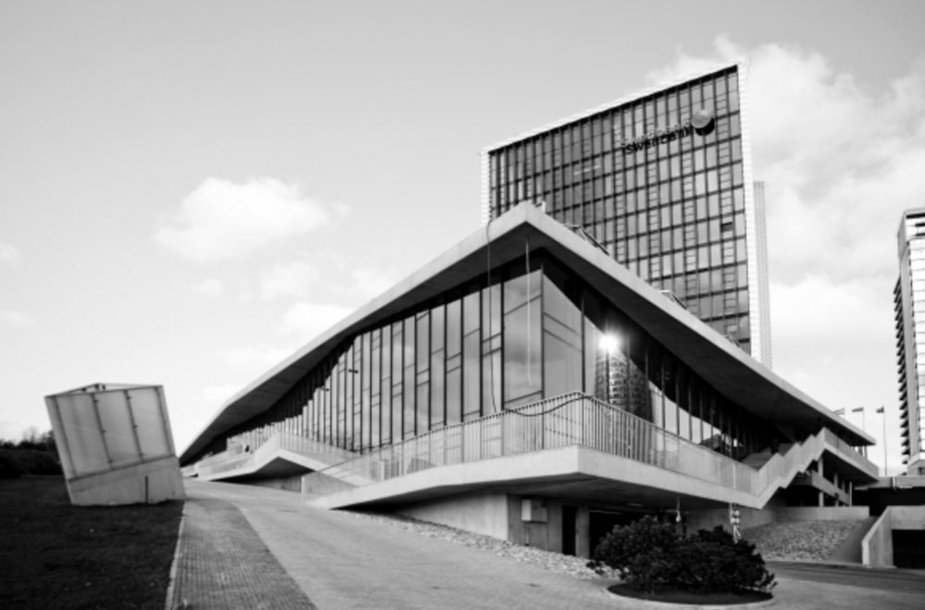 I've had the pleasure of studying bank architecture for more than 30 years. While completing my master studies in architecture in Norway, my primary task involved the analysis and criticism of bank buildings, and I touched the subject again later, when I studied architectural psychology in France. Bank architecture is so fascinating because banking is a profession that has always desired to signal dignity and, occasionally, power, while money itself does not have a separate visual identity.

Money has no identity. Therefore, it has not been obvious to the world's stock exchanges and banks how to define and symbolize their own identity. Monetary institutions' architecture is a good reflection of that, often using 'stolen' symbols from classical architecture, objects, exaggerated dimensions, etc.

Through the centuries, financial institutions sought to find themselves. But have they succeeded? The way I see it, not really. I'm afraid, actually, that their architecture of today indicates that something is wrong with the very principles of money power.

Leaders of the Soviet Union, all as one, tried to create communist architectural ideals. Steel and concrete, distinctive shapes, forms of power. It was like watching the hammer and sickle in the buildings’ architecture.

It was right here that the world banking system started in the Middle Ages. The Ponte Vecchio ("Old Bridge") is a Medieval stone closed-spandrel segmental arch bridge over the Arno River, in Florence, Italy, noted for still having shops built along it, as was once common. Butchers initially occupied the shops; the present tenants are jewellers, art dealers and souvenir sellers.

A curious fact regarding the words “bank” and “bankruptcy” is that they derive from the economic activity on Ponte Vecchio. The stand, table or bench that held the merchants goods, was called a "banco" (“bench”). When a merchant was no longer able to pay his taxes, his banco was literally broken, or "rotto," into pieces, therefore creating the term "bancorotto" which translates into "bankruptcy" in English. All initiated by the famous Medici family.

Bank of England is the central bank for the UK and the model that today's central banks around the world have originated from. The headquarters in London was built over the years 1925-1939. What you see is a building with numerous elements from ancient architecture, powerful symbols of power and wealth. The building's lower part looks like a dark, impenetrable wall. Bank architecture came to resemble an odd mix of power symbolism and elements borrowed from ancient cultures.

Left, is a brand new bank building in Riga, Latvia. A building that would have made the Soviet architectural ideologues very pleased. The power symbolism is overwhelming. No humility, beauty or local adaptation. Only raw power. Probably also an attempt to mimic Mitterrand’s new 'triumphal arch' in Paris. But what is it they triumph over here? That the architecture of communism ideals has been resurrected, now symbolising a stronghold of capitalism? And that in Latvia, a country that just recently managed to break away from the Soviet Union's mighty power claws.

In pre-war Lithuania, many members of the Jewish middle class, especially the educated strata who had already experienced the establishing of Jewish autonomy to some extent, mobilized their resources in order to strengthen the social economic basis of the Jewish masses and their livelihood. With the blessing and initiation of the Economics Committee at the Ministry for Jewish Affairs and with the assistance of the “Foundation,” a national financial system of co-operative

credit societies was established. By the end of 1920, these were already active in 44 cities and towns and were named “People's Bank” (in Yiddish, Folksbank). In addition to making positive impact on local economic activity (extending loans, etc), they were also of importance in the social and cultural sphere. In a number of places, the community bodies and other organizations also used the bank building. There were also cases of the bank granting study scholarships and prizes for cultural activities.

In order to co-ordinate and regulate the activities of the People's Banks in time of need and crises, a central institution was established in 1921, formally called the “Central Jewish Bank for the Encouragement of Co-operation.” 71 People's Banks throughout the country were linked to it, and the number of (dues paying) members reached 11,000. Over the years, the capital assets of the institutions increased, as did  the amount of deposits and savings. Thanks to that, the conditions for granting loans to members and public institutions were loosened. In 1930, 85 People's Banks existed in Lithuania with 22,262 members. In that year, 11,953 loans were granted to them and to others in a total amount of 10,249,159 Lit (approximately one million Dollars).

Although the People's Bank was open to non-Jews as well, the share of gentiles was no more than 5%. Work in the offices, correspondence and daily routine was conducted in Yiddish, and this was also true of the national conventions and conferences which took place every few years. This was, therefore, a Jewish banking system spread throughout the cities and towns of Lithuania. At the time, the total deposits amounted to 14,113,413 Lit (approximately $1.4 million), of which 46% came from members, 16% from institutions and 48% from non-members. Taking into consideration members' families and all others who required the People's Banks' services, and that of its associates, we can conclude that they served about two thirds of the Jewish population. Unlike similar Lithuanian banks, that enjoyed cheap governmental credit, the People's Banks had to depend on deposits only. In 1933, a special bank was established to assist Jewish farmers (Yiddisher Landwirten Bank).

The central office was in Kaunas with 31 branches spread out in towns throughout the country.

After the liberation in 1991, Lithuania inherited the monobank system of the former Soviet Union, with specialized state banks serving specific branches of the economy. They quickly established a central bank at the centre of their banking system. They were weak in bank management and lacked staffs with modern banking skills, and no system had an appropriate legal, regulatory, or supervisory framework governing the banks. In some instances, fraud and corruption prevailed, encouraged by the relatively permissive regulatory and supervisory environment for banks that existed in the Baltics. All three had to decide what to do with remnants of the Soviet banking system while encouraging growth of the new private banking sector.

Estonia and Lithuania reconstituted the specialized Soviet banks as national state banks and began to privatize them. In some instances, the state still retains an ownership stake. In Lithuania, the state increased its share as part of a rescue effort for some former state banks. Latvia, by contrast, reconstituted the savings bank, then privatized branches of the remaining banks. The residual branches were merged into one bank, rehabilitated, and then subject to formal privatization.

The saving banks were privatized. In the early stages, the three private banking systems were similar and grew rapidly. All three have had liberal policies toward licensing new commercial banks, believing that more banks would generate competition needed to drive down deposit and credit rates, and provide the capital needed to fuel the emerging private sector.

Many new private banks were established by enterprises that wanted access to cheaper funding than was available from other banks. Little thought was at first given to the implications of this policy for banking safety and supervision.

DNB Bank has its headquarters in Basanavičiaus street in central Vilnius, in a beautifully renovated old building which seems, however, hardly practical.

Nordea bank is headquartered in Didžioji str. in Vilnius centre. Nicely renovated Old Town building was built in 1913, following a project by M.Prozorov.

Danske Bank headquarters, 2 Saltoniškių str., just outside the centre of Vilnius.
A good example of what I earlier called ‘mafia architecture’ – dark windows that cover a shapeless building. Indicates power, money, and no transparency.

Swedbank headquarters, 20A Konstitucijos str, just outside the centre of Vilnius, designed by A.Ambrasas, V.Adomonytė, T.Eidukevičius, D.Malinauskas, 2009. Nice building with warm and light colour combinations. But what is the shape supposed to tell us? Two huge loudspeakers?