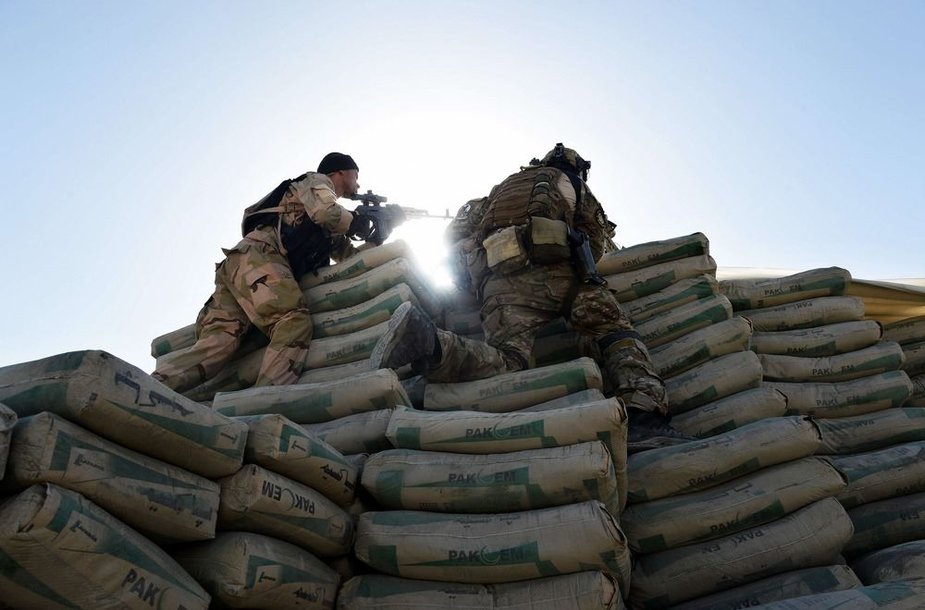 The leaders of the International Security Assistance Force (ISAF), a NATO-led security mission in Afghanistan, believe that the Afghan forces will be able to ensure security in their country during next year's presidential election, ISAF spokesman Brigadier General Günter Katz says.

The German general, who is ending his term of office as ISAF spokesman, said in an interview with BNS that the Afghan security forces have made progress and are successfully fighting against Taliban militants and other extremists.

However, he added that with the security situation remaining fragile, the Afghan forces continue to need assistance from the international community.

- What is the ISAF leadership's assessment of the process of the coalition-led training of the Afghan national security forces? In particular, do you think they're able to take control of the situation around the country today and will be able to do so in late 2014?

Let me just look back when I came here one year ago. When I came here, the Afghans didn't have full strength of 352,000 people. Most of the fighting was conducted by ISAF, but they led about 50 percent of the operations, not more than this, and they lacked many capabilities. Today, one year later, they're about to lead 100 percent of all the operations. ISAF then will move completely to a train, assist and advise role in supporting the Afghans. Still, we can fight if required but primarily we are supporting them.

They have the desired number of 352,000 now and they gained lots of capabilities in particular in areas where they started from scratch, like the air force. They gained other capabilities in terms of artillery and things like this. So, indeed, we can see that the training went fine, the transition process went fine and we have no ground to believe that the Afghans will not be able to carry on the security in the future.

However, we have to admit that what we can see clearly as success is not sustainable yet. So, they still require support from the international community and this support will be provided by the Resolute Support mission. Resolute Support will solely focus on training, assisting and advising the Afghans. It will not be a combat mission. Contrary to what we're doing right now. I think for the Afghans, it's also important to know that the international community will stay committed.

We don't have the number yet, we don't have exact capabilities where that Resolute Support will focus on, but it's clear that many nations will contribute. NATO has already ten non-NATO nations that are willing to contribute to Resolute Support. Two nations gave their numbers already - Germany and Sweden - and we are confident that other nations will follow here in due course.

- I am interested in types of military assistance to Afghanistan post-2014. What particularly interests me is what the special forces' role will be after the scheduled completion of combat operations.

- I'm afraid I can't give you much more than we have discussed already. Let's have a look back one year ago, when the heads of states and government made a Chicago declaration. In that Chicago declaration, it was stated that the new mission will be a train, assist and advise mission. It has not been described in what area and it has been stated that it will not be a combat mission. Since I can speak only about the NATO part, I can't give you any thoughts how the special forces will be utilized in the future.

I can give you some areas where some nations showed interest in continuing their efforts, but I have to repeat that the decision is not made yet. So what we can see right now is that there is great effort in increasing the capability of the Afghan air force, for example. Individual nations have already provided planes. The United States has just recently announced the addition of 20 light support airplanes which have a close air support capability. So there's a view to the future already and the nation will, of course, continue to train the air force.

I know that some nations look into whether to support in the area of logistics, which is shortfall, in the area of counter IED, which would be subsidised under engineering in terms of medevac. Nations look into whether they support. So those are the areas where the Afghans are not sustainable yet. But despite the fact that those decision have not been made yet, those are the areas we look into right now.

- What would be your assessment of the security situation in Afghanistan: the biggest threats, the most vulnerable regions and insurgency tactics that are the biggest headache for the local forces and maybe even for ISAF?

The NSF were quite successful with support of ISAF to push the insurgency out of the urban area to fight them in the former safe havens. We just recently had to see that the fighting season really started again. The Taliban announced the start of the fighting season. What they described was that the international community, and the Afghans in particular, can expect three kinds of attacks: one would be assassinations, the other one would be the so-called insider attacks and the third one would be high profile attacks where they try to focus on certain compound things like this. In the past weeks indeed we have seen a couple of those high profile attacks. Most of them caused some casualties, but overall they didn't affect our campaign. They didn't affect our strategy and clearly they give a wrong impression to the outer world regarding the security situation in Afghanistan. Because overall, the NSF are very successful in pressuring the enemies of Afghanistan and those attacks, despite the tragic fact that people died, achieved nothing for the terrorists or the extremists.

The NSF will continue to pressure Taliban or those extremists and we have no doubt that in the long run, or even in the near future, they will be very successful in bringing down the level of violence in this country.

- Do you feel that the proportions of the blame by the public opinion go into the right direction?

- The word 'blame' sounds like there is no evidence for this. There is clear evidence and I have to underline that UNAMA and ISAF have similar numbers. I would rather call it the evidence versus the blame. Our assessment is -- and we do surveys in this regard as well -- the population of Afghanistan is well aware who the main reason for those civilian casualties is and who will continue to mitigate those civilian casualties. They know that the insurgency is causing the majority of this and that ISAF will continue to mitigate that.

- What about the reconciliation process with the Taliban and insurgency leaders in general? Does ISAF have any say in it?

- No. It's clearly the Afghan-led process. It's the responsibility of the Afghan government. ISAF and NATO certainly in principal welcome every effort in this, but again, we play no role in this reconciliation process. It's strictly Afghan.