‘I am delighted that this artist has been given so much space and received such a lot of interest here in Vilnius. I hope that cultural bridges such as this will continue to be built, and that we will be able to bring even more works by Cornelia Gurlitt (1890-1919) here,’ said Dr Hubert Portz, patron of the exhibition A Different Gurlitt and the biographer of the artist, during his visit to the Samuel Bak Museum.
Source: Partnerio turinys
Projekto partnerio inicijuotas ir parengtas turinys, turinio kontrolė – partnerio rankose 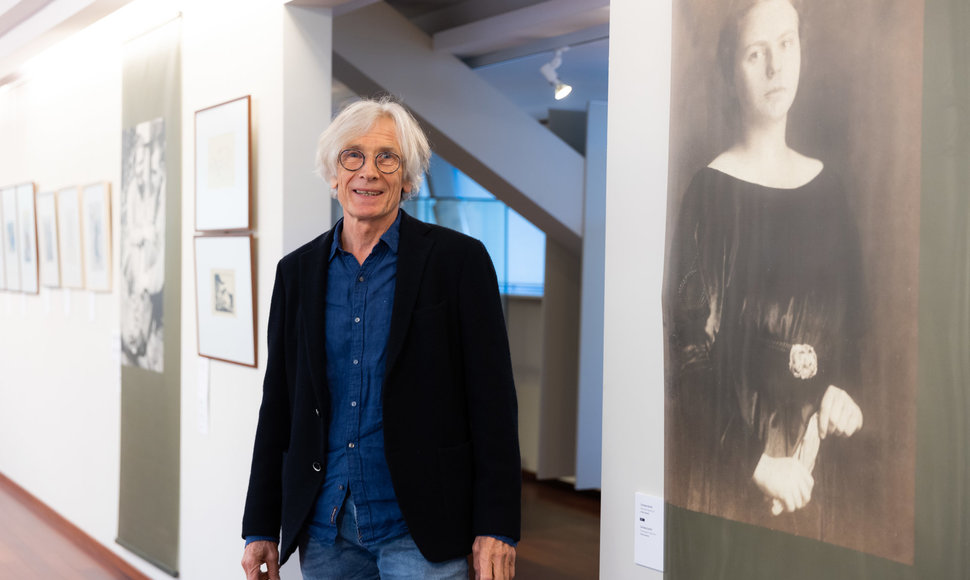 This rather unique exhibition of German expressionist Cornelia Gurlitt, whose artwork dates back to the early 20th century, can be seen at the Samuel Bak Museum, a division of the Vilna Gaon Museum of Jewish History. It presents Gurlitt’s works from the collection of the Museum of Fine Arts Bern that have not been previously exhibited. The exhibits include five originals and twenty-nine copies of museum quality artwork. These works have not yet been exhibited in Bern, where 138 works by Gurlitt are stored. 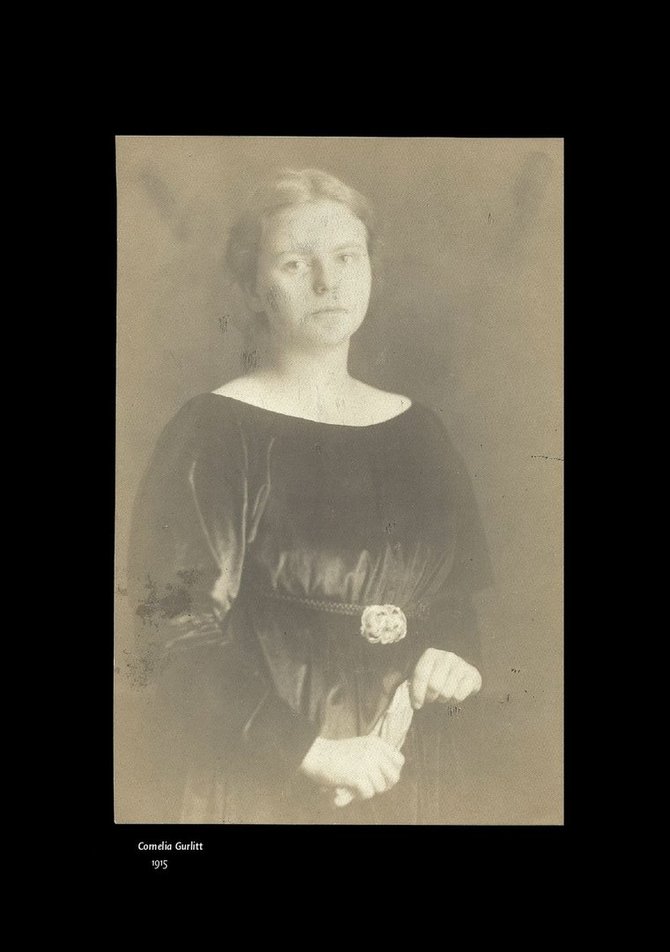 Unexpected discovery of a forgotten artist

The solid personality of Hubert Portz played an important role in obtaining permission from the Museum of Fine Arts Bern to exhibit Gurlitt’s artwork in Vilnius. It was Portz who discovered Cornelia Gurlitt who had remained in oblivion for almost a hundred years. ‘So far, the museum in Bern has not shared her artwork with others. They only allowed a few pieces of Cornelia’s artwork to be exhibited in Jerusalem,’ Portz said. ‘I think they agreed to exhibit it there and here at the Samuel Bak Museum, because these works by Gurlitt clearly depict Jewish life, and are on display at a museum of Jewish culture and history.’ 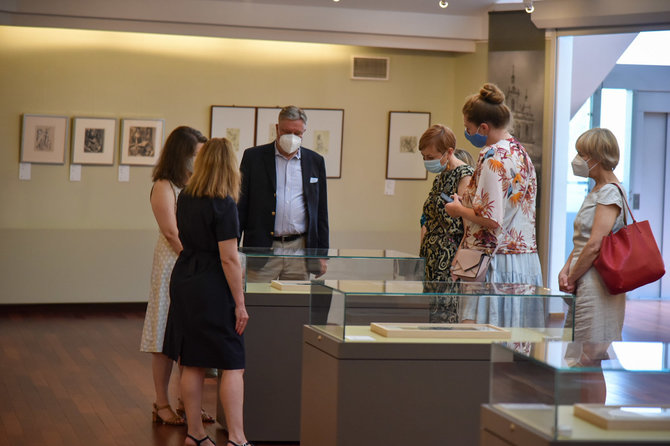 On Wednesday evening, the guest from Germany attended the closing event of the exhibition A Different Gurlitt. Historian Dr Andrea Griffante gave a lecture on the history of Vilnius and medicine during World War I. Dr Hubert Portz spoke about the kind of Vilnius that Gurlitt witnessed when working as a nursing sister at the then Kaiser Army Hospital in Antakalnis from September 1915 to May 1918.

It was in 1982 that Hubert Portz, a medical psychologist by profession, began to take an interest in art, including the exceptional personalities of the artists who created it. He first heard of Gurlitt in 2006. ‘At that time, I was exploring the life and artwork of expressionist Conrad Felixmüller,’ he recalled. ‘As a result, I also came across Felixmüller’s girlfriend Lotte Wahle, who turned out to be close friends with Cornelia Gurlitt.’ Portz discovered a drawing by Conrad Felixmüller titled Portrait of the Sister of Mercy Cornelia Gurlitt and decided to find out who she was. 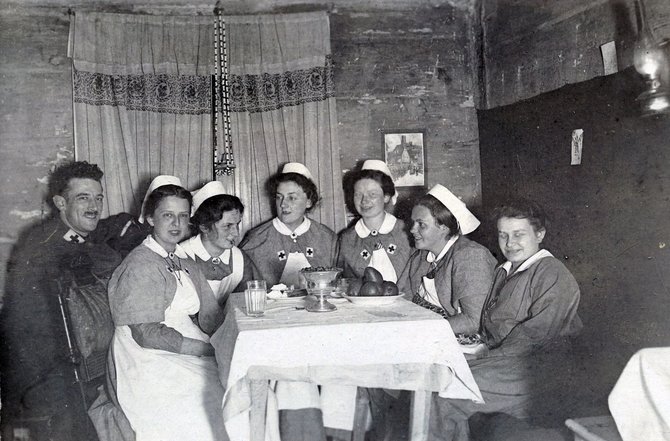 The art collector purchased his first works by Gurlitt at a women’s art auction in 2012. ‘There were Fourteen works by Cornelia Gurlitt on sale there. Someone bought one faster than me, I bought twelve, and one remained unsold because I found it too expensive,’ he laughed recalling. ‘When I wanted to buy it later, I found out it was gone and started investigating who bought it. It turned out that the piece of art ended up with some descendants of Cornelia’s family. Therefore, no regrets that I don’t have that particular work since it led me to the relatives of this unique artist.’

Hubert Portz continued his search. After placing an advertisement in the Frankfurter Allgemeine Zeitung, he came across Cornelia’s artwork which was part of the legacy of Paul Fechter, the man the artist loved, and her friend Hans. It was for sale. Portz noted that both the works purchased at the auction and others found later were created in Vilnius. 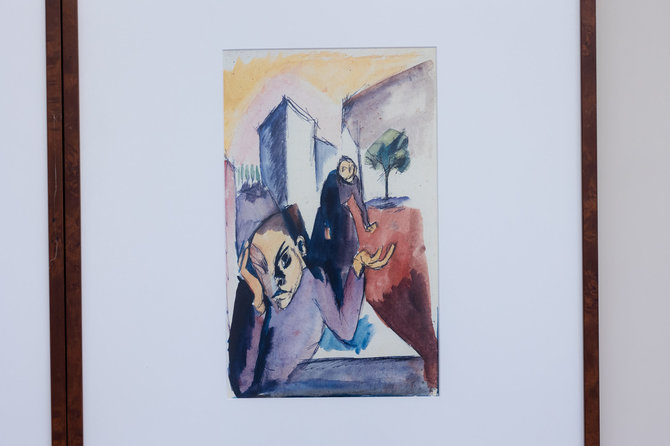 Art must be shared

In 2014, Portz held an exhibition of Gurlitt’s artwork at his Kunsthaus Désirée gallery in Höchstadt, and then decided to present her artwork to Lithuania. The patron donated sixteen of Gurlitt's works to the Vilna Gaon Museum of Jewish History, which were exhibited at the Museum's Tolerance Centre in 2015 as part of the exhibition Cornelia Gurlitt: The Journey of the Heart. Vilnius Through the Eyes of a German Expressionist in 1915-1917. At that time, the museum's collection of authentic images of Vilnius captured by photographers of the 10th Kaiser Army was also on display there.

In May 2021, the Vilna Gaon Museum of Jewish History received a gift from its long-time sponsor Hubert Portz which included authentic valuables dating back to the beginning of the 20th century, namely artwork by such German artists as Cornelia Gurlitt and Karl Schmoll von Eisenwerth, and a letter written by Imperial German Field Marshal Hermann von Eichhorn.

Portz did not come to Vilnius empty handed this time either. The head of the Museum revealed that they were overwhelmed by the invaluable gifts that their dear guest presented them with. This time the Museum received graphic works by Lasar Segall and Marc Chagall. ‘Art is for everyone to see. I hate hiding it. It must be visible,’ laughed the patron and art collector who did not hide his warm feelings for Vilnius and the Museum. 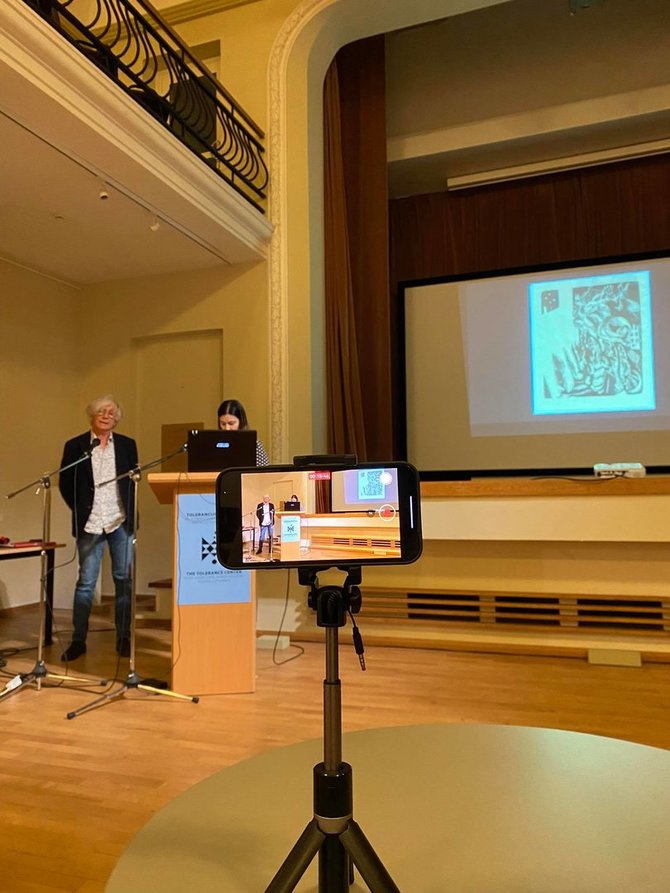 Outstanding artist and woman with a desire for freedom

Because of the pandemic, it was only now that Hubert Portz and his friend Ute Baum were able to visit the exhibition A Different Gurlitt. Portz was impressed. ‘This exhibition is meant to present Cornelia not only as an artist, but also as a woman who had to experience a lot of hardship in order to live as an independent artist. I would say her life story and artwork are worthy of a screenplay, because there were so many powerful things in her life: unrequited love, desire of a woman to become an independent artist, and war,’ said Ieva Šadzevičienė, head of the Samuel Bak Museum and curator of the exhibition. The aspiration of a woman artist who lived in the early 20th century to be an emancipated woman also fascinates her biographer Hubert Portz, particularly when you consider that Gurlitt was growing and developing as a personality and an artist under difficult political circumstances. After graduating from the Dresden Girls' School in 1909, she was only able to pursue education in private schools because of the laws that were unfavourable to women in Germany at the beginning of the 20th century. In 1913, Gurlitt went to study art in the city of her dreams, Paris, but only a few lithographs created by her remain from that period. When World War I broke out, she returned to her native Dresden and graduated as a nursing sister. In December 1914, she decided to serve on the front line and was sent first to nurse the sick in Poland, then to Marijampolė, and in September 1915 she came to work in Vilnius, the city where she experienced so much in life.

In Vilnius, Cornelia faced the terrible reality of war: the plight of crippled soldiers, the despair and suffering of the impoverished Jews who remained in the city, the begging disabled... ‘Gurlitt was greatly affected by what she experienced during World War I in poverty-stricken Vilnius. All these powerful experiences undoubtedly shaped her personality and were reflected in her artwork,’ the curator of the exhibition says. 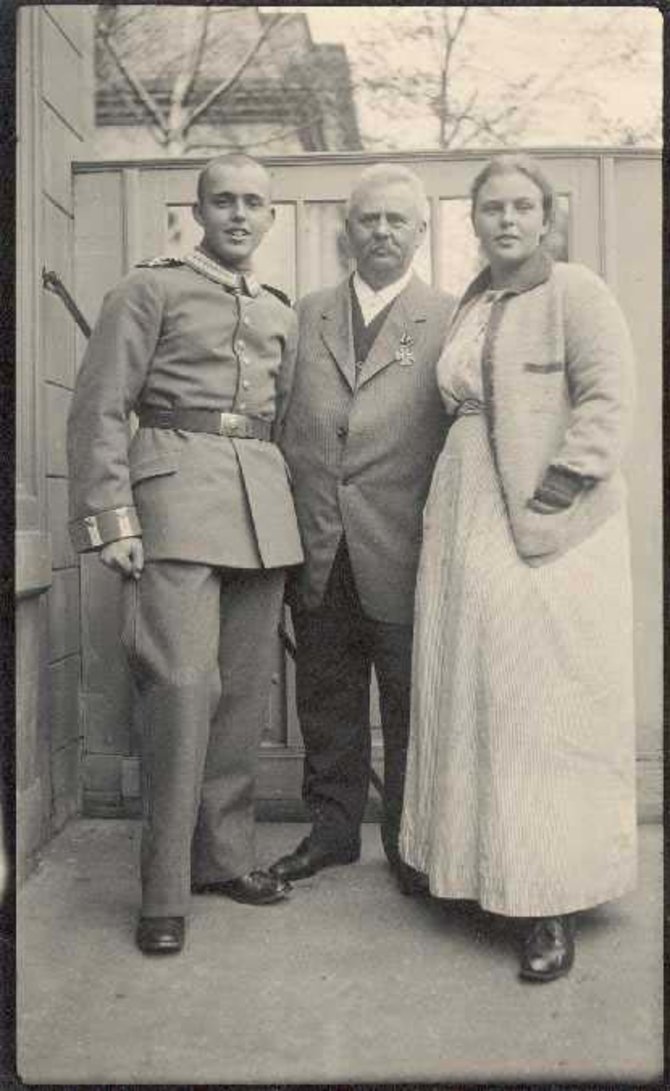 The years that Cornelia spent in Vilnius turned out to be the most productive period in her creative career. It was also a time of search for her own spiritual and philosophical identity, which included an interest in Judaism and Jewish religious traditions. The topic of existentialism became the main driving force of her creative life, and the expressionist style became her personal philosophy.

In Vilnius, she met her great love Paul Fechter, a journalist in the press department of the Kaiser Army. He was older then her and married. After the war Fechter returned to his family in Germany. Therefore, Vilnius left an imprint on the life of the artist as a city where she could give a sense to herself and emerge as a professional, but also as a city which destroyed her hopes for any future personal life.

Nostalgia for Vilnius where she felt happy

‘When Cornelia returned to Germany in May 1918 and settled in Berlin, she tended to remember Vilnius with nostalgia. She used to say that it was the place she wanted to be, that she was happy there,’ Hubert Portz says. ‘In her letters, Gurlitt writes that Vilnius was a paradise. In fact, she was free there, she could manage her own life, and she was in love.’

‘Hubert Portz discovered Cornelia Gurlitt. If she had lived in another time, if her works had not disappeared during World War II, she would have been included in art history textbooks as one of the strongest female expressionists,’ Ieva Šadzevičienė says. The curator noted that the exhibitions of Gurtlitt’s artwork were held almost a hundred years apart. Her letters show that when the artist lived in Vilnius, she had exhibited her artwork here in a joint exhibition together with other German artists, but it was impossible to trace back where exactly it took place. After her death, in 1922, there were plans to host Gurlitt’s exhibition in Berlin, but the plans came to nothing. In 1938, attempts to organise an exhibition of her art were once again made, but at that time it was no longer possible to do it. Gurlitt's art was considered ‘degenerate’, because according to Nazi rules, expressionism and other modern trends of art were treated as non-conforming with their ideology, therefore they could not exist... 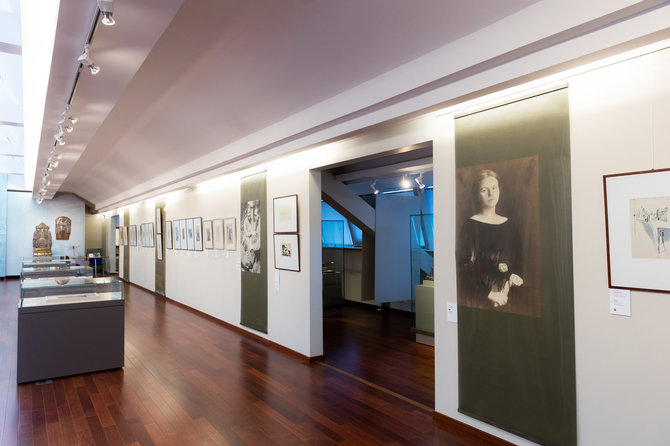 Thanks to Hubert Portz, almost a hundred years later Gurlitt’s artwork is again accessible to the public. Since 2014, more than ten exhibitions of this talented expressionist have been held in Lithuania, Germany, Switzerland and Mexico. According to her biographer, art scholars have not yet studied Gurlitt's artwork in detail, but she is undoubtedly a strong artist who deserves to be presented to the world.

The Vilna Gaon Museum of Jewish History extends their sincere gratitude to its partners: Council for Culture, Museum of Fine Arts Bern, Embassy of the Federal Republic of Germany and His Excellency Ambassador Mathias Sonn and his team for sponsoring the exhibition and for publicity.