Group of fifteen protest against Lithuanian Foreign Minister in Israel 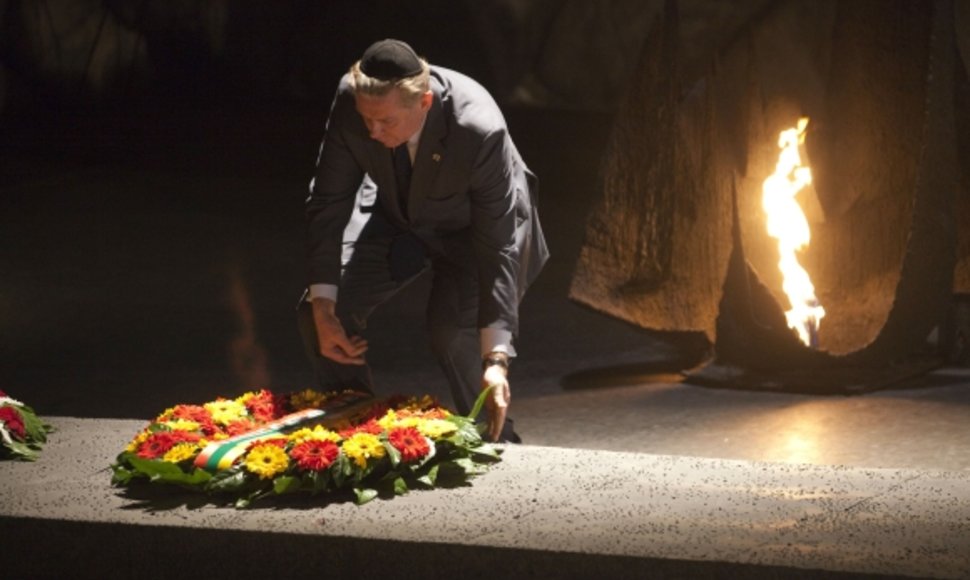 Lithuanian Foreign Minister Audronius Azubalis lays a wreath at the Hall of Remembrance during a visit to the Yad Vashem Holocaust memorial in Jerusalem on March 4, 2012. / AFP/„Scanpix“ nuotr.
Aa A + A - Reset
Report mistake

Some 15 people, including Holocaust survivors, protested Monday evening against the Lithuanian foreign minister, who is visiting Israel to attend a commercial business conference at Tel Aviv's Dan Panorama hotel.

The protesters, who held signs in Hebrew and English reading "where is your conscience? Where is your solidarity with the Holocaust survivors?", claimed Foreign Minister Audronius Ažubalis had made anti-Semitic comments in the past, and that the Lithuanian government has made attempts to "belittle the memory of the Holocaust."

Director of the Simon Wiesenthal Center Dr. Efraim Zuroff said that Ažubalis is "a guest of honor for Israeli groups doing business here. However, this is a man who has made anti-Semitic remarks and opposed a bill that would have helped Lithuanian Jews get their stolen property returned."

According to Zuroff, "Lithuania's government has been fighting a battle to turn the Holocaust into another tragedy among many. Their aim is to place Nazis and Communists on an equal footing. That is to say they are comparing between those who build the Auschwitz and those who liberated it. This angers us and that's why we're protesting," he exclaimed.

Attorney Yossef Melamed, an 87-year-old Holocaust survivor who attended the protest told Ynet: "I was 17 during the Holocaust. After the war, me and a few of my friends compiled a list of 3,000 Lithuanians who we believe cooperated with the Nazis."

Melamed said he later discovered that "some names on the list are considered to be national heroes in Lithuania," adding that he was accused of making false allegations and even interrogated by police officers who came to his house and told him that he might be sued.

"The list we wrote is proven, and I don't mind going to trial, as long as it is here in Israel and I don't have to go back to Lithuania," he noted.

Marcelle Juliet Saul Sheiman, among the conference organizers, said in response: "The event was organized as part of the celebrations for the 20 year anniversary of Lithuania-Israel relations.

"The protesters have every right to demonstrate, but our view is that we are moving on – not forgetting the Holocaust, but encouraging close relations between the two nations."