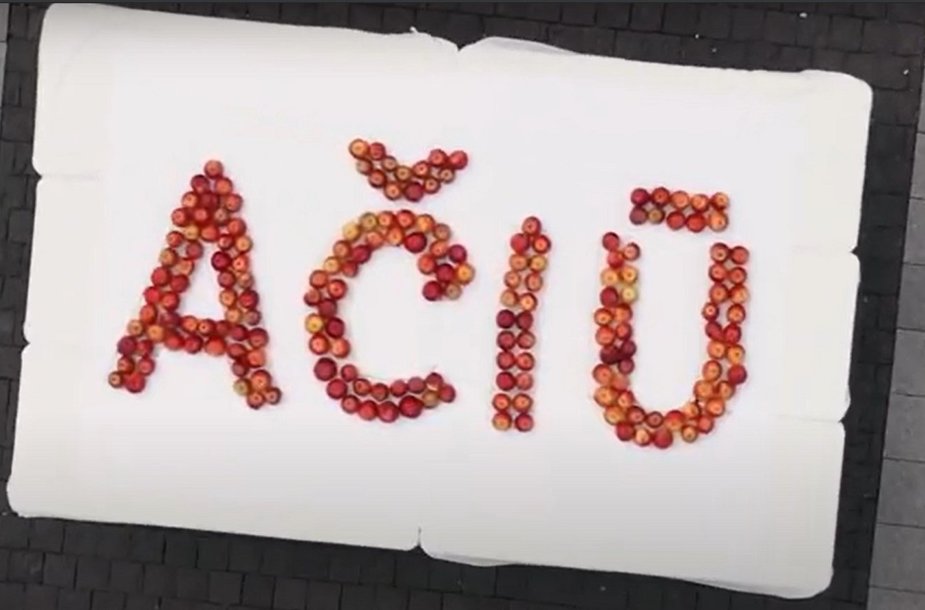 Ačiū from Maisto Bankas
Source: 15min
The charity and support fund Maisto Bankas is celebrating its 20th anniversary, and to celebrate this occasion, the Lithuanian word ‘thank you’ (‘Ačiū’) has been emblazoned in apples by the Maisto Bankas team in Vilnius’ Town Hall Square.

“It is a symbolic thanks to all those who has contributed to the work done by Maisto Bankas over the past two decades. We are thankful to the organisation’s founders, volunteers, staff members, supporters and partners. Their contributions allowed Maisto Bankas to grow and gain strength. Thanks to our helpers we save increasing amounts of good food from being discarded every year. This way we not only help those in need, but also create positive change for our planet by conserving the Earth’s resources,” says the head of Maisto Bankas, Simonas Gurevičius.

According to Gurevičius, the birthday thankyou sign was made from apples for a special reason “The apple has become something of a symbol of Maisto Bankas, having accompanied the organisation for many years now. It is an affordable everyday fruit which is also rich in vitamins, and a symbol of plenty. It is apples that we are most often inclined to share, and it is this desire that unite a variety of people for a noble goal 20 years ago, and today the same desire unites the team at Maisto Bankas as well.”

In 2001 during a Lithuanian and US initiative fund event, the Maisto Bankas programme was granted its first financial support, and this is where the organisation’s beginnings are counted from (this marks organizations beginning). Maisto Bankas’ work gained the active support (was strongly supported by) of President Valdas Adamkus, eldership officials in cities and villages, and increasing amounts of citizens offered to join in volunteering activities. Soon, the charity programme itself became an independent charity and support fund, which aims to combat food waste, and seeks to aid those in need of food.

“Twenty years ago, there were numerous firsts for Maisto Bankas on different days. The first financial support, the first food donors, the first car… from a small warehouse in one of Vilnius’ districts, Maisto Bankas has grown into a massive organisation, which aids more than 143 thousand individuals and operates across Lithuania. There is definite reason to celebrate, and so as a thanks to all those who were, who are and who will be together with us, we are now marking our birthday,” the head of Maisto Bankas says.

In the year 2020, Maisto Bankas collected and distributed 7,724 tonnes of food, 5,307 tonnes of this was saved from being wasted. Currently, the organisation is assisted by 2,148 volunteers, and Maisto Bankas collects donations in 84 towns and cities across Lithuania, distributing them in 203 different areas across the country, and helping 143 thousand people struggling financially. It has been calculated that every single euro donated to the organisation turns into 15 portions, or 7.5 kg of salvaged food.