The European Humanities University Welcomes Lobsang Sangay: Debating the Philosophy of the Tibetan Cause 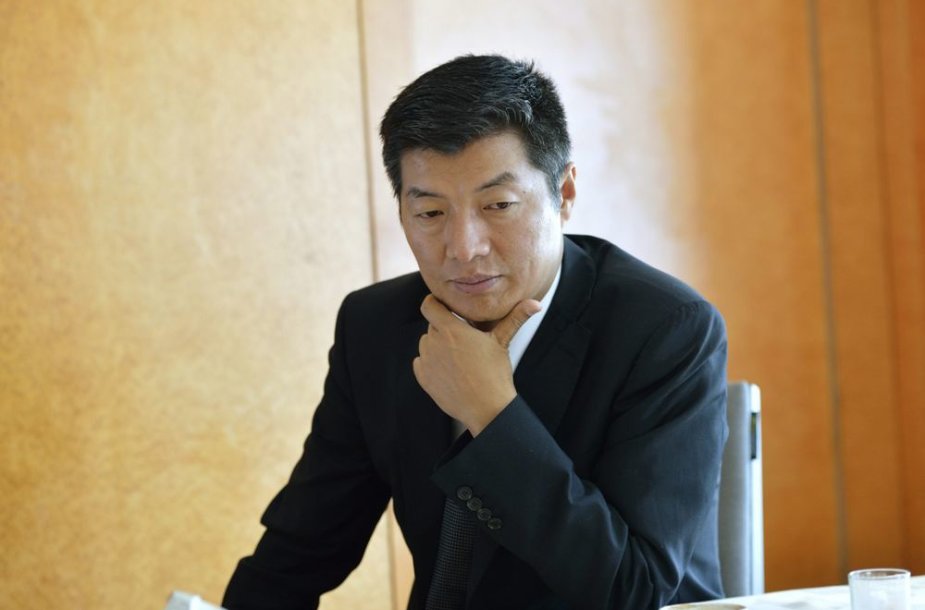 Sangay, a PhD graduate of Harvard Law School, is the leader of the Tibetan administration based in Dharamsala, India, having taken over responsibility of Tibetan political affairs after the Dalai Lama’s decision to retain only religious leadership in 2011.

“It is a great honour and privilege to be on this campus,” Sangay begins, after scanning the room full of people jostling to get a better look at him. Though this particular discussion was open only to those, who had registered beforehand, a handful of enthusiastic supporters of the Tibetan cause managed to convince the organizers to let them in.

The reason for the event’s popularity immediately becomes clear. Sangay’s reputation precedes him: he exudes an aura of calm optimism and jubilant determination. The way he talks is rooted in Buddhist philosophy and he makes the audience aware of his thoughts with the use of concise phrases. No words are wasted.

When asked to describe the situation in Tibet, Sangay compares it to the occupation of Lithuania during the Second World War and to modern day Belarus. He mentions that, according to the Chinese constitution, Tibetan culture and language should be protected and encouraged, but both are, in reality, “not only discouraged, but also denied.”

Sangay continues, by expanding upon the theme of cultural assimilation: “If you grow up like the Chinese, if you speak Chinese, you become Chinese.” He alludes to the importance of preserving culture as a form of maintaining Tibetan identity.

Geographically, he mentions, ten major rivers of Asia flow from Tibet and, given the numerous Chinese and Indian citizens without access to fresh water, the region will most likely grow in importance in the future.

If you mention the words ‘human rights’ in Tibet, you get arrested.

“Nowadays, wars are fought over energy,” Sangay declares, “Soon, wars will be fought over water.” Future environmental problems are not ignored by the leader of the Tibetan administration; he is aware of how resources such as ice and water will grow in significance.

Mineral deposits, such as gold and copper, are also abundant in the region, making it economically valuable.

“Political repression continues even today,” Sangay explains, having mentioned the 1959 occupation of Tibet by China, “If you mention the words ‘human rights’ in Tibet, you get arrested.” Disappearances of those unhappy with the way things are run do occur. Even journalists aren’t safe.

He points out that new restrictions make it difficult to get into Tibet in the first place. A visa into China is not enough. “They won’t allow you into China, if you say you’ve met me,” he jokes.

“The denial of freedom leads to resentment,” Sangay notes, with reference to the self-immolation of Tibetans. “We believe in democracy, we believe in non-harm.” According to him, these are the two main principles of the Tibetan cause.

Sangay next enlightens the crowd a bit about the way the Tibetan government in exile functions. With approximately 1,500 employees (around 600 of which are full time), the administration is responsible for 70 refugee primary and high schools; it also oversees roughly 200 monasteries and nunneries that were rebuilt in exile.

When confronted about the administration’s sources of funding, Sangay smiled and drew attention to how “everyone’s suspicious” about this. Despite most people’s belief about secretive organizations and shadow governments supplying the economic stimulus to keep the exile government running, Sangay says it’s far simpler.

“The Voluntary Freedom Tax accounts for 30% of the administrative cost; NGO’s, humanitarian organizations, some governments make up the rest. Most don’t give much, because they have interests in China.” What Sangay highlights is that most organizations are forced to choose between maintaining good relations with China, or upholding the Tibetan cause; picking sides is inevitable.

The cost of running all of the schools, clinics, foreign offices and monasteries under the exiled administration is very low. Spending only $22-25 million per year is made possible with pay cuts.

“I work for less than €300 a month,” he outright states, when no-one could guess his wage, “Why would anyone do it? Our civilization is at stake, our dignity is at stake. For us, our identity is being challenged.” The government leader knows that the people he works with value their cause more than money. Exchanging financial security for an altruistic requires unmatched resolve.

He then goes deeper into the idea of choosing to act upon personal beliefs. “No one in this world can escape death, because you are born. What you leave behind while you live is what matters.” Living for more than oneself, according to Sangay is what matters, “if you do it on principle.”

This sense of legacy is what makes human beings distinct. “You are given this brain for destruction, or construction,” he muses, implying that it is up to every individual to make a choice of how to act.

“Suffering is a part of life,” Sangay happily remarks, stating that once you know this, it is easier to understand what life is all about. The situation in Tibet is “negative, challenging, but at the same time – an opportunity.” He, of course, refers to the optimistic side of the state of affairs, one that allows people to do astonishing things and to leave behind a legacy.

“You are given an opportunity to make history,” he elaborates, “You are given this rare privilege to stand up for what you study in university: democracy.” Theory, according to him is fine, but “in practice, you need to make your community better to change the world.” The irony of someone involved in actual politics speaking to an audience busy pursuing theoretical knowledge is not lost among the students of EHU.

Sangay eagerly continues: “Yes, we are suffering, but do you give up, get depressed? No. We fight democratically, non-violently and we will succeed.” Without wavering, he reiterates that “we know we will succeed.” He draws attention to how Tibetans draw inspiration from the plight of the Baltic States and the significance the independence movements have had in motivating the cause.

A curious spectator asks the head of the government, whether he is married and what his spouse’s thoughts about his actions are. Sangay warmly talks about the great understanding between him and his wife and daughter. Though he has to sacrifice time with his family, their support makes his work much easier.

The Sikyong answers a question on the mental detachment Tibetans might have from their culture and how it is possible to stay connected to the cause. Sangay immediately turns to the underlying enquiry about how to deal with a regime that maintains “sharpshooters, the army, tanks in the street, CCTV.”

“They can control you as long as there is this climate of fear, paranoia and suspicion,” Sangay declares, mentioning how the situation can be reversed by referring to the examples of Mexico and of Germany during the Second World War. If the authorities are aware of the extent of dissatisfaction, the circumstances are reversed.

The unity between Tibetans, as he says, is because of the shared Tibetan consciousness: “As long as you believe you’re Tibetan, you are the same.”

Sangay alludes to solidarity regarding the Tibetan cause being possible, since “differences and similarities are a matter of perception. Fundamentally, we are all the same.”

Hyperbolizing differences in society as part of a ‘divide and conquer’ approach can be countered in a very simple manner; the source for Sangay’s motivation is straightforward: “I am Tibetan and I want my freedom. As long as you believe – you are.”

The discussion thus encompasses the understanding of how life should be lived; this is more than about politics, it is about how to be a decent human being, who leaves behind a legacy without any regrets.

“Believe in yourself; if you don’t – the battle is half lost,” Sangay indicates.

The future plans to fight for Tibetan independence cannot be called a fight in the direct sense. Sangay continues to promote non-violence, since a truly peaceful result can only be achieved by relying on a peaceful process.

The Tibetan cause, according to him, will be furthered by the actions of every individual, “whether or not they know it.” Since everyone is aware of the situation, it is up to the people themselves to change how things are little by little, through their everyday actions.

“You always trust the people: it is they, who actually make sacrifices, give up their life and wealth – people are the source of your strength,” Sangay ponders. Having trust in the population is what matters, since they are always there.

“You might not know you are the next leader, until you are tested,” he refers to how he was elected as the head of the exiled government by Tibetans worldwide. “Paralysis through analysis – don’t think too much,” Sangay teaches the smiling crowd of EHU students, but warns them that having a vision and a plan for how things should be done is still a must.

Sangay ends the discussion by reiterating the need for belief in oneself. Whatever a person’s choices in life, they cannot be accomplished without confidence, surety and dedication. Leaving behind a legacy is what is important. In Sangay’s case, he has committed himself to acting for the sake of providing a better future for Tibet and its people.