Financial support and new solutions for businesses suffering from the coronavirus 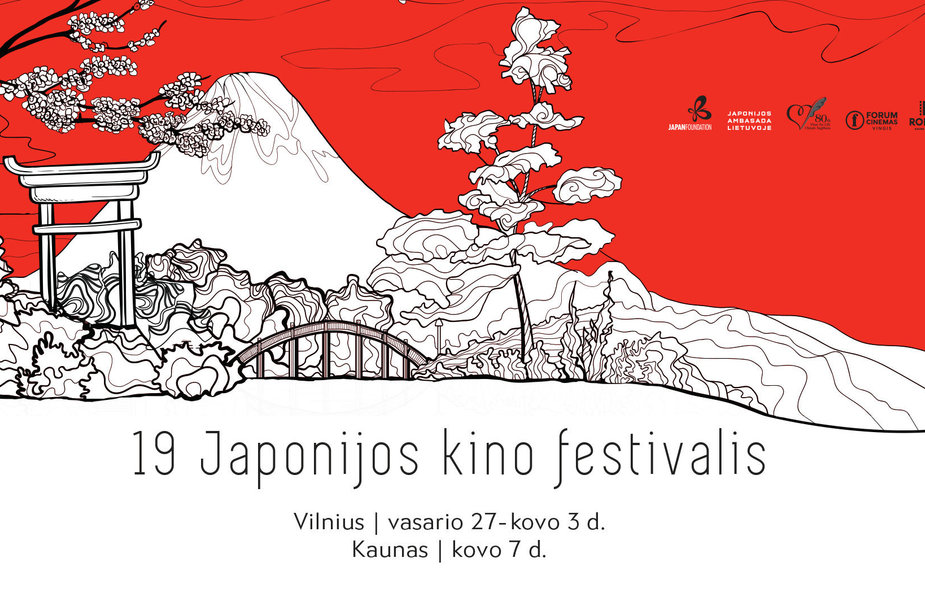 The Embassy of Japan in Lithuania together with the Japan Foundation is glad to announce the annual Japanese Film Festival. The 19th Film Festival this year is going to bring us films of various genres, which will be screened in Vilnius and Kaunas from February 27th until March 7th. We encourage everybody not to miss such a great opportunity to learn more about Japanese cinema!

Six movies of different genres, produced in 2017-2018, will be shown in Vilnius „Forum Cinema Vingis“ and Kaunas Cinema Centre „Romuva“. The festival will include comedy, drama, adventure, romance and movies inspired by real life stories. The movies will introduce traditional and modern Japanese culture, present beautiful landscapes and shed light upon everyday relationship between family members, the pursuit of love and search for the meaning of life. The diversity and distinctive presentation of the themes will enable the audience to become more familiar with Japan and its culture.

On February 27th the festival will begin in Vilnius with Tatsushi Omori’ story, based on essayist Morishita Noriko's longselling book. The movie “Every day a good day” (2018) depicts the protagonist learning important life lessons through the tea ceremony. The movie‘s biggest star is a well known Japanese actress Kiki Kirin of „Shoplifters“ (2018). At the recommendation of her mother, 20-year-old Noriko (Kuroki Haru) and her cousin Michiko (Tabe Mikako) start taking tea ceremony lessons with Takeda (Kiki Kirin), who has a reputation for being an extraordinary teacher. At first, Noriko is confused by the intricate rules, but after two years she comes to realize the profundity of the tea ceremony.

On the next day of the festival you will see “Mixed doubles” (2017), a fun story, written by a popular screenwriter, Kosawa Ryota, depicting the rejuvenation of love and life through table tennis which is brought to screen by Ishikawa Junichi. Tamako (Aragaki Yui), who was once known as a "table tennis girl wonder", was in a relationship with (Seto Koji), the ace of her company's table tennis club, until another table tennis player, Airi (Nagano Mei), steals him away. Returning to her hometown, Tamako meets the members of the table tennis club her deceased mother operated, including Hagiwara (Eita), and together they begin practicing hard to defeat the pair of Eshima and Airi.

February 29th will introduce a live-action fantasy „DESTINY: The tale of Kamakura“ (2017), a spectacle based on Saigan Ryohei's bestselling comic and directed by Yamazaki Takashi. The ancient capital of Kamakura is a town where nonhumans including ghosts, demons, gods and buddhas live alongside people. Akiko (Takahata Mitsuki) is a young bride who marries into the family of mystery writer Isshiki Masakazu (Sakai Masato), who lives in Kamakura. Akiko is surprised by the unusual town, but she enjoys her life as a newlywed. However, a trifling incident results in her spirit being swept away to the underworld.

On the first day of spring, March 1st, the audience will be able to get to know one of the typical samples of Japanese aesthetics. The movie “Dad’s lunchbox” (2017), based on a simple but touching true story which gained viral recognition, is about a newly divorced father (Toshimi Watanabe) who finds himself out of depth when faced with the unfamiliar challenge of preparing his daughter’s daily lunchbox. The director Masakazu Fukatsu highlights the existence of more profound relationships between single fathers and their children, while providing an insight into the growing culture of bento lunches prepared by fathers dipping their toes into the culinary world.

March 2nd will be dedicated for those who seek love and find themselves lost in their choices. Romantic comedy “Tremble all you want” (2017), directed by Ooku Akiko, is a story of a heroine who is terrified of love as she rediscovers her true self. 24-year-old office employee Yoshika (Matsuoka Mayu) has a secret crush on her former junior high school classmate Ichi (Kitamura Takumi), but then her colleague Ni (Watanabe Daichi) asks her to be his girlfriend. She's excited but ambivalent about being asked out by a guy for the first time in her life, and she decides to throw a reunion party so she can see Ichi again. Yoshika anguishes over her feelings about Ichi versus Ni and ideals versus reality.

The festival in Vilnius will end on March 3rd with the movie “Mori, the artist’s habitat” (2018), directed by Okita Shuichi. Drama depicting the final years of painter Kumagai Morikazu, who rarely left home and spent his time studying the creatures in his garden. Vegetation thrives in painter Morikazu's (Yamazaki Tsutomu) garden, which is home to creatures that serve as models for his paintings, including numerous bugs and cats. A sweet and heartwarming day begins for Morikazu, who gazed at these garden creatures on a daily basis for over three decades, and those who love him.

On March 7th the film festival will continue in Kaunas Cinema Centre “Romuva”, where two movies - “Every day a good day” and “Dad’s lunchbox” - will be screened.

All the movies will be shown in original language, will have Lithuanian and English subtitles.

All movies are free of charge!

For the spectators in Vilnius, the free tickets will be distributed at the ticket‘s office in Forum Cinema „Vingis“ 1 hour before the movie starts. One person can get up to 2 tickets. Information about the movies: phone 1567, info@forumcinemas.lt.

For the spectators in Kaunas, the free tickets will be distributed at the ticket‘s office in cinema centre „Romuva“ (Kęstučio st. 62) from February 29. One person can get up to 4 tickets. Ticket office phone 8 37 202 788, info@kcromuva.lt.

More information:
For more information about the Film Festival please visit the website of the Embassy of Japan in Lithuania:
https://www.lt.emb-japan.go.jp/itpr_lt/filmfestival19LT.html