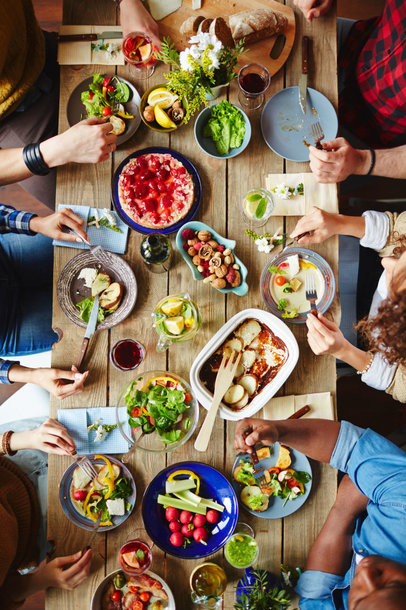 A quarter of Lithuanians discard food once a week, while half - at least a few times a month, reveals a study by Maisto Bankas alongside Swedbank. Despite prominent Lithuanian sayings about bread, this product lands in the bin most often. According to the study, the main reason for throwing out food is excessive hospitality during celebrations. Specialists highlight that unconsumed food has a severe environmental footprint, and reduced food waste could contribute to people’s welfare.

“Food is wasted across the entire chain of production, sale, and consumption. Half of it is being lost before even reaching the household, while the other half being discarded at home. Based on various studies, every family discards enough food to fill a standard bath every year,” said Maisto Bankas head Simonas Gurevičius as he presented the study data.

According to Gurevičius, the situation in Lithuania isn’t particularly bad in comparison to Western Europe and the USA. An online survey showed that 58 per cent discard very little. Nevertheless, we still have room for improvement: 15 per cent of people think they discard more than they should, and one in five describes the quantities of discarded food as “reasonable”. Youth under 34 should be the most concerned over wasting food, as this age group admitted discarding the most.

In terms of specific items, it is usually white and rye bread that lands in the bin, with 29 per cent of respondents reporting discarding it. Respondents also indicated they often pour out milk, dispose apples and tomatoes, lettuce, potatoes, bananas, and other fruit. Curd and sour cream are the most often thrown out among dairy products.

Lithuanian hospitality – not just a problem of overeating

“The desire to have a bountiful feast during celebrations is the most frequent reason for food disposal. Forty-two per cent indicated they throw away food that isn’t eaten during family gatherings. This trend is more prevalent in towns and rural areas, rather than cities,” S. Gurevičius comments.

Only a little fewer people indicated that they also dispose leftovers of everyday meals. The next most popular reason for wasting food is forgetting what is stored in the fridge or freezer – this reason was indicated by a third of respondents. Another 20 per cent indicated they buy too much, and a further 15 say that they buy food in oversized packages.

According to the head of Maisto Bankas, half of the respondents dispose food because they are afraid of food poisoning, a third do not want to eat unappealing leftovers, and a fifth of the respondents simply get tired of eating the same for several days in a row. However, disposing of food is not a pleasant thing for most: only 16 per cent do not feel bad about disposing it.

When going shopping, almost 90 per cent of respondents check what food they have at home, and half of the respondents make a shopping list. Such lists are typically used by those with higher education levels; however, residents of the larger cities make them less often than those living in rural areas.

Twenty per cent of respondents never buy discounted food when they are unsure if they will eat it, however, just as many people do so often or all the time.

“This survey data offers hope that we can improve the situation even more. At the moment, Maisto Bankas saves from disposal and distributes around five thousand tonnes of food a year, but we could save three or perhaps even four times more if we had more capacity to do so,” Maisto Bankas’ head S. Gurevičius states.

The consequences of food waste – how we understand it

Most of the respondents realize that food waste leads to the wasting of resources such as land, water, labor, and energy, with 70 per cent indicating they were aware of this. A third of respondents agreed that this problem contributes to greenhouse gas emissions.

However, only one in ten gave thought to how food waste increases deforestation and only one in five considered that it contributes to a decline in biodiversity. Fifteen per cent of respondents thought that food waste has no negative environmental impact at all.

“The negative impact of food waste is clear in most environmental and social aspects. We wish to encourage everyone to consume more responsibly, abstain from unnecessary food purchases, and treat food more sustainably in their household. This way, we could contribute to forming a more sustainable lifestyle,” says Jūratė Cvilikienė, Institute of Finance head at the partner of the study Swedbank.

According to the United Nations Food and Agriculture Organisation, almost a third of all food produced in the world is lost or wasted, with 28 per cent of cultivated land growing produce which is never consumed. Food waste also leads to the loss of 38 per cent of all energy used by farms, and the food discarded in Europe alone could feed 200 million people a year.

The representative survey of the country’s population on food waste was performed by market research company Norstat in November 2020 on commission from Maisto Bankas and Swedbank. The survey interviewed 1,001 residents of the country aged 18 to 75.