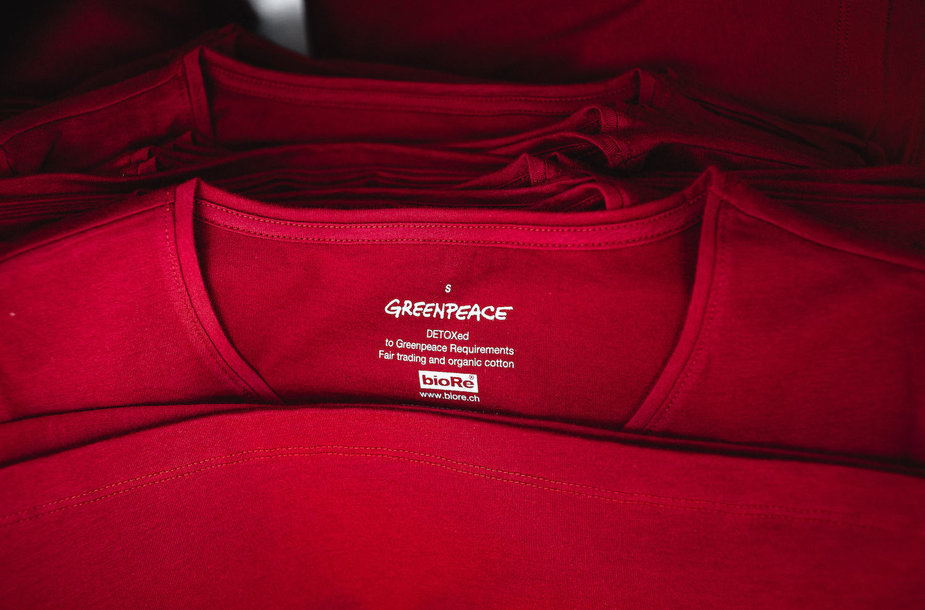 Rytis Petrauskas / Utenos Trikotažas textile
Source: 15min
The global environmental organization Greenpeace has recognized SBA Group company Utenos Trikotažas as the first and so far the only textile company in the world to work entirely according to its textiles procurement standard. Greenpeace has already started to produce its own t-shirts at the Lithuanian company. The new Greenpeace standard embodies all existing best practices in terms of zero use of toxic chemicals, fairness and transparency.

“It is the standard for any fashion brand really looking to achieve credibility in terms of sustainability. Utenos Trikotažas has become the first manufacturer to prove it is compliant with these requirements. Under the standard, organically farmed natural fibres, production and products tested free of harmful substances, fair pay and transparency are uniquely combined. And all this with the most stringent testing,” says Viola Wohlgemuth, Greenpeace Consumption and Toxics Campaigner.

Collection after years of suspension

After launching the Detox My Fashion campaign in 2011, Greenpeace announced that it was suspending all sales of textile products “until brands and suppliers can prove through transparent reporting that their clothes are not made using and releasing hazardous chemicals”. Several years later, in 2018, Greenpeace partnered with Utenos Trikotažas on a pilot project which led to the development of its new Textiles Procurement Trial Standard in 2019, and has since initiated the first industrial-scale textile production to show that it is possible to produce textiles in keeping with ambitious environmental requirements.

“It’s a historic achievement. Being the first factory in the world to fulfil Greenpeace’s requirements is a real phenomenon and appreciation of our efforts. For a long time Utenos Trikotažas has been free from hazardous chemical inputs in all the stages of the production process. We hope that our example will inspire and encourage other textile producers to follow in this direction,” says Petras Jašinskas, CEO of Utenos Trikotažas.

Sustainable, transparent and non-toxic garments, made to last

Utenos Trikotažas has already finished production of the first batch of Greenpeace’s new t-shirt collection and will continue the production later this year.

According to Viola Wohlgemuth, Utenos Trikotažas and its partners[1] have shown that for the first time ever, steps to avoid hazardous chemical use and contamination have been taken across the entire production chain, from fibres in the processing of raw materials, to dyeing and printing according to Detox principles, and finally to the sewing and packaging of high quality, ready-to-wear garments, made to last.

“The Greenpeace textiles procurement standard requires Utenos Trikotažas to control the chemicals used via complete testing of the wastewaters released when it bleaches, dyes, washes and prints the cotton. This collection proves that truly clean, fair and completely transparent production is in fact possible. And not in some boutique sewing shop, but at an industrial level,” Wohlgemuth says.

European Union Commissioner for Environment, Oceans and Fisheries Virginijus Sinkevicius congratulated non-governmental and private sector initiatives and achievements to make the textile industry greener and emphasized the importance of sustainability in global competition. Last December, the European Union introduced its strategy of tackling pollution – the Green Deal. It will include the Circular Economy Action Plan, which will focus in particular on resource-intensive sectors such as textiles, construction, electronics and plastics.

“Textile is one of the main industries that will have to become more sustainable across the entire production chain and beyond. Textile must become more circular, more reusable and recyclable. The Circular Economy Action Plan – an important part of the EU Industrial Strategy – will be the roadmap for this transformation, but the first ones to follow this path will naturally have a competitive advantage in the market,” said Virginijus Sinkevicius, EU Commissioner for Environment, Oceans and Fisheries.

Years of preparation: Detox My Fashion

Greenpeace’s Detox my Fashion campaign put a lot of pressure on the global textile industry, the second largest polluter of freshwater worldwide, to eliminate the use and discharge of hazardous chemicals. Environmentalists identified 11 groups of hazardous chemicals widely used in the textile industry that are of particular concern due to their effects on people and the environment and insisted that the major manufacturers and their suppliers commit themselves to stopping their use in production by 2020.

Utenos Trikotažas, part of the SBA Group, is the only Lithuanian company participating in this campaign and one of the few Detox-committed companies with a vertically integrated production cycle, i.e. when all production processes, from raw material production through to the final ready-to-wear product, are being made under one roof.

Since the beginning of the Detox my Fashion campaign, over 80 different textile companies have joined the initiative. These include famous brands such as H&M, Nike, Adidas, Puma and many more, representing about 10-15% of the global apparel market.

The new Greenpeace Global Textile Procurement Trial Standard (2019) is an example of best practice for any company implementing an ambitious plan to Detox.

The major shareholder of Utenos Trikotazas is SBA group, which owns 92.31 per cent shares of the company. SBA is one of the largest Lithuanian business groups. It operates in real estate, textile and furniture sectors. The furniture sector is comprised of the manufacturer Kauno Baldai and the SBA Furniture Company, which manages five furniture producers – Klaipėdos Baldai, Šilutės Baldai, Germanika, Visagino Linija, Mebelain. SBA also owns the real estate innovation company Urban Inventors, which is developing the Green Hall business valley in the Lithuanian capital Vilnius and the BLC business centre in Kaunas. SBA group also is the major shareholder at the investment management company Capitalica Asset Management, which manages the Kaunas based business centre Kauno Dokas, the Vilnius based 135 and will develop the modern offices Verde in Riga’s Skanste area close to the city’s centre. SBA has also established SBA Modular, which plans to build a factory in Lithuania and produce modular multi-storey houses. Also, the group has recently acquired the robotics and automation solutions company Robotex. The group’s companies employ close to 5,000 employees.

[1] All supply chain partners are listed at my-trace.ch