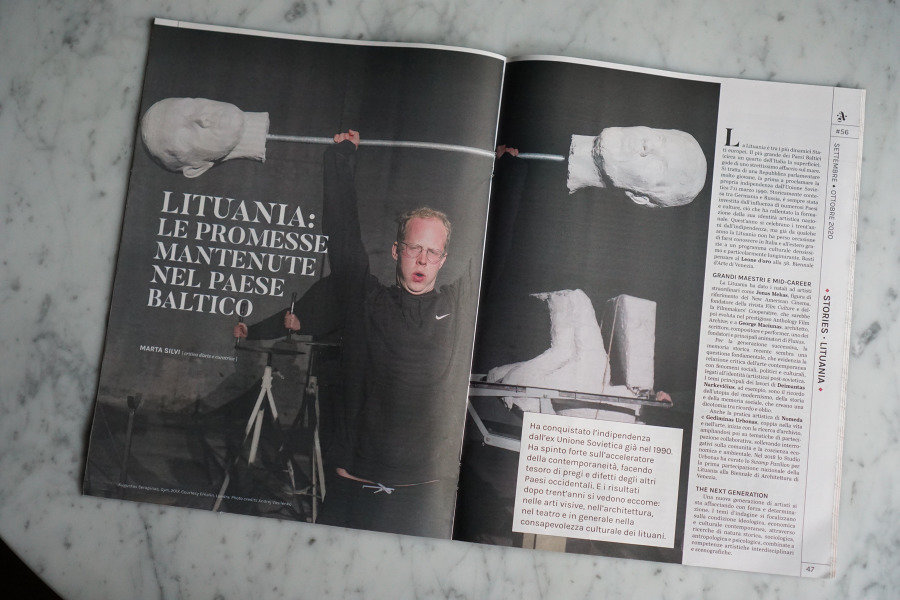 In the face of the pandemic, traditional forms of presenting culture are complemented with innovative ones. Recently, the attention of art experts in Italy was focused on Lithuanian culture, which attracted special curiosity after last year when the Lithuanian pavilion received the main award at the Venice Biennale, the Golden Lion.

The virus that has enchained the world brought stagnation to the world of culture – artists’ tours and performances abroad have been severely restricted, suspended or banned altogether. Some of the events planned in Italy to commemorate the thirtieth anniversary of Lithuania’s independence in spring also had to be cancelled. However, the pandemic also opened up new avenues for cultural export. This autumn, instead of live events, the works of Lithuanian artists were presented through various Italian media: magazines, online portals and radio.

An overview of Lithuanian art in an influential Italian publication

Recently, the name of Lithuania resounded loudly in one of the major cultural publications in Italy, Artribune. Laura Gabrielaitytė-Kazulėnienė, the Lithuanian cultural attaché in Italy, who, together with the Lithuanian Culture Institute, coordinated the extensive overview of the country’s culture in the magazine, states that such focus from this prestigious publication means a great appreciation of our country’s art market.

“It is very gratifying that the review of the Lithuanian art market appeared in the influential publication Artribune, which has the name of a reliable art expert not only in Italy but also abroad. This is an opportunity for the artists of our country to introduce themselves abroad when it is not possible to travel and participate in events live,” commented L. Gabrielaityte-Kazulėnienė.

In the feature story, renowned curator Marta Silvi reviewed and singled out the most prominent representatives of Lithuanian culture, art spaces and events which have a significant influence on the formation of the country’s art, architecture and theatre scenes.

Artribune describes Lithuania as one of the most dynamic European countries that has been proudly enjoying independence for thirty years. The moving away from the Soviet Union and the free decisions of various cultural representatives are evident in the fields of fine art, architecture, theatre and cinema, as in Lithuanian cultural consciousness in general.

“M. Silvi carefully analyses the most prominent personalities representing distinct fields of Lithuanian art, including Jonas Mekas, the pioneer of avant-garde cinema, Jurgis Mačiūnas, the famous founder of Fluxus, Lina Lapelytė, one of the authors of last year’s Lithuanian pavilion at the Venice Biennale, Eimuntas Nekrošius, who has left an indelible mark on the world of theatre, as well as the theatre director Oskaras Koršunovas. These are just some of the important names from the Lithuanian art world that the article mentions”, said L. Gabrielaityte-Kazulėnienė.

The publication also highlights the most important Lithuanian cultural spaces, institutions and programmes that significantly contribute to the country’s art and culture. For example, for several years now, the Lithuanian Culture Institute has been organising the Visits Programme through which various cultural professionals get invited to Lithuania for study visits. One of such visitors was art historian and curator Alessandra Troncone.

“Compared to other countries of the former Soviet bloc, Lithuania is perhaps the one that most clearly speaks a truly European language. The signs of its recent history are clearly visible, and this endows an indisputable charm; at the same time, we perceive a push towards the future that the new generations are pursuing with great responsibility and seriousness. Although there are galleries that operate at an international level and despite the growing international role of the ArtVilnius fair, I believe that the commercial circuit is still rather limited, partly due to the Soviet heritage and partly to the absence of widespread collecting”, commented A. Troncone in the article.

Another art critic, curator and the artistic director of Latituto Art Projects, Benedetta Capri De Resmini, who fosters close relations with Lithuania, reviews the Lithuanian art scene from her perspective and singles out the names of Lithuanian artists she felt the most impressed by.

“My encounter with Lithuania was initially filtered by a novel that I loved very much, Baltic Souls by Jan Brokken, and later by the writer Roman Gary, a naturalised French Lithuanian Jew. What sets the latest generations apart is their precise deconstruction of historical rhetoric in search of a language that does not conform to the ideological forces or the homologating power of the mass media. In particular, I would say that female artists are continuing to develop interesting themes. One such is Lina Lapelytė, one of the artists I worked with several years ago. I also follow the work of Kristina Inčiūraitė with interest: it always evokes new elements that are not only related to issues of identity or violence against women. Finally, I would like to mention Mykolas Juodelė, a very young photographer who did a residency in Rome for the Magic Carpets platform, and who I am sure will have an important career as a photojournalist”, said Capri De Resmini.

“My first experience of Lithuania was very significant, not only because its history intersects with the most crucial moments in European history, but also because I was deeply touched by the palpable need of the people I worked with to write their present time and future through the languages of art and culture, to free themselves from a complex past and transform it into a conscious present. The thirst for culture that I found in Lithuania is something that has long since faded in Italy”, Giabrone told Artribune.

The Embassy of the Republic of Lithuania in Italy is a partner in presenting Lithuanian art and culture in the publication Artribune.

The English version of the publication can be found here:

The name of Lithuania resounding at the Italian Radio Festival

“Last spring, various ideas were circulating about how presentation of Lithuanian artists abroad could be continued. We spoke with Italian experts who have already worked directly with Lithuanian representatives, so we developed the idea of creating an opportunity for them to share their impressions and opinions about the culture of our country. Radio Rock radio station launches a series of radio shows in which Italian experts discuss various areas of Lithuanian culture, such as cinema, music, visual arts and theatre. The first programme, dedicated to the influence of rock music on the restoration of independence, introduced the history of Lithuania and attarcted great interest”, said L. Gabrielaityte-Kazulėnienė.

Lithuanian rock music was played during each radio show. The music programme was prepared by the renowned Lithuanian musicologist Darius Užkuraitis.

Other shows within the radio festival that started on 17th November reviewed Lithuanian rock music, cinema and theatre. In January 2021, Radio Rock will continue the series with radio programmes dedicated to Lithuania in Italy with reviews of its visual arts scene and the Lithuanian pavilion Sun & Sea at the Venice Biennale.

Recordings of the programmes are also available in podcast format on the Radio Rock website www.radiorock.it