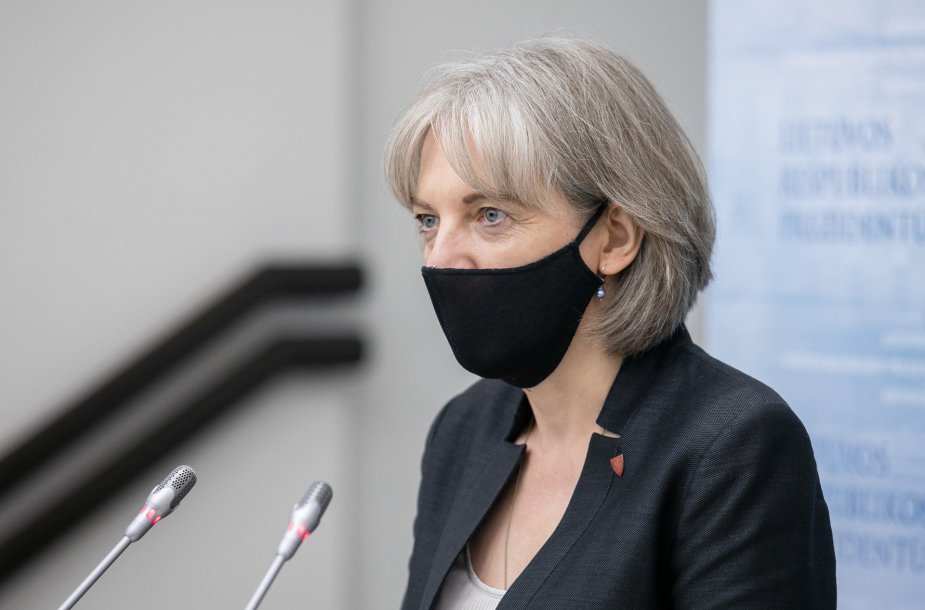 On Friday, after the first informal Lithuania Foreign Policy Coordination Council meeting called at President Gitanas Nausėda’s initiative, his advisor Asta Skaisgirytė stated that the goal is a foreign policy, which defends Lithuanian interests and which would be based in national consensus. This apparently is why the work of various institutions needs coordinating.

The new council’s sitting called at G. Nausėda’s initiative on Friday featured the participation of institutional heads and experts working in the foreign policy domain.

The Presidential Palace previously announced that in the meeting, consultations would be held regarding the formation of a Lithuanian foreign policy based on unified national consensus and a plan for its implementation. The council aims to ensure smooth inter-institutional work in the foreign policy domain.

“Similar meetings would be held previously as well, but this one is special in that it is the first since last year’s elections,” A. Skaisgirytė said, describing the meeting as a strategic level discussion.

It was announced ahead of time that the first foreign policy coordination sitting will focus the most attention on discussing the situation in Belarus, also deciding on the 2021 national security, NATO, EU, Eastern Partnership policy agendas, as well as discussing a programme to manage the threat emanating from Astravyets NPP.

After the sitting, A. Skaisgirytė also mentioned that there were discussions on relations with the USA, which is undergoing a presidential transition. Seimas Foreign Affairs Committee head Žygimantas Pavilionis also spoke about Washington.

“By all possible means, we need to introduce Lithuania to the new Washington as a centre of democracy and direct kind words to the main goal – free and democratic elections in Belarus,” Ž. Pavilionis said.

“The deeper thematic discussion was on Belarus because last year was a year of Belarus. For Lithuania, its relationship with this country is crucial,” A. Skaisgirytė explained, adding that the representatives of various institutions agreed that a long-term strategy regarding Belarus must be prepared.

There were also discussions on the processes of coronavirus vaccination and economic recovery plan.

“The topic of Astravyets Nuclear Power Plant is constantly in discussion, it is inevitable. We have work that must be done,” A. Skaisgirytė said, pointing out that the safety of this power plant has now become a “pan-European question” and expressing hope that the European Commission will offer proposals in the near future.

“Lithuanian infrastructure should not be used for the sale of electrical power from Astravyets, which is what is being sought after,” Minister of Foreign Affairs Gabrielius Landsbergis emphasised as well.

It is planned to organise further meetings in consideration of necessity and foreign policy priorities.

“Such discussions are beneficial and help outline the direction of foreign policy. This is also a very suitable time because the government has just finished drafting its measures plan, this including the foreign policy domain,” G. Landsbergis said.

With the new government taking to work, numerous discussions arose on whether it will be able to maintain a united line with the Presidential Palace in terms of certain foreign policy questions.

President G. Nausėda usually avoids criticising Poland, where, according to European Commission and independent experts, the principle of the rule of law is being breached. However, both G. Landsbergis and V. Čmilytė-Nielsen suggested that they would not stay silent if they observe problems.

In November, when criticisms of Poland’s ruling bloc gained momentum in Europe due to the reforms ongoing in Poland, particularly in the judiciary, and Polish President Andrzej Duda was visiting Lithuania, G. Landsbergis stated: “That’s what friends are for – to draw attention to when something isn’t quite right.”

That said, senior expert at the Vilnius Institute of Policy Analysis Marius Laurinavičius explained to 15min back then that the foreign policy coordination mechanism will have to be launched: “I believe this will only strengthen Lithuanian foreign policy – more ideas will arise, more strength and this could influence policies.

“During Andrzej Duda’s visit, Nausėda said one thing, while Landsbergis, already aware that he will be nominated – something else. This is also important because, in diplomacy, you can send varied signals. It’s normal because then, Lithuania’s position becomes more balanced,” M. Laurinavičius spoke.

On Friday, the analyst told 15min that he is content with the council being operative: “The more discussions and efforts to have a common, coordinated position, the better.”

“As per the Constitution, the president passes the most important foreign policy decisions. If he would like to just push his agenda, he could refuse to consult anyone.

Thus, the gathering of the council is a positive factor. We can only evaluate the results when they do or do not manifest, but the discussion is a desire to talk things out and find common points. This did not occur during Grybauskaitė’s term.

If successful, Lithuanian foreign policy will only grow stronger, I believe,” the political scientist spoke.