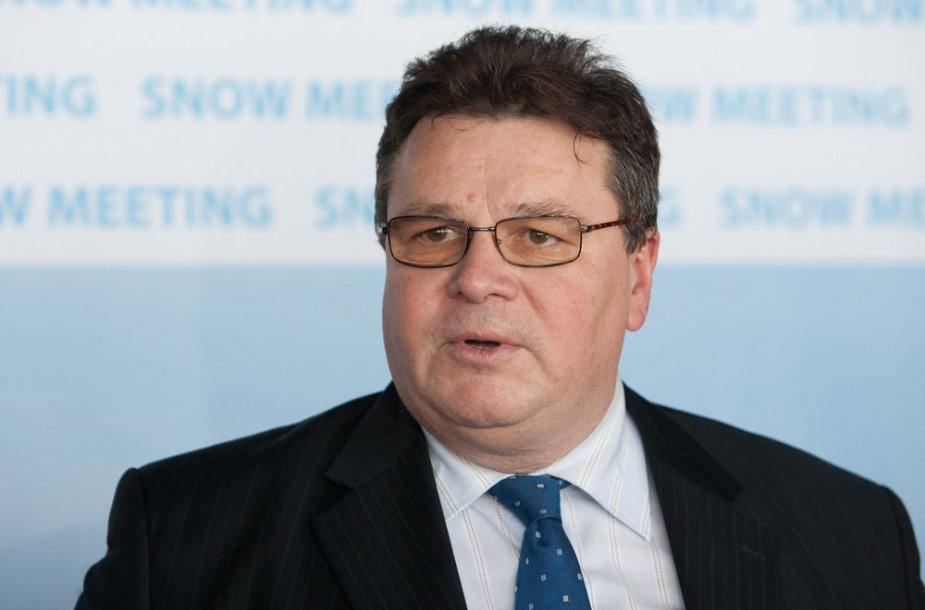 "I just signed the Istanbul Convention," Linkevičius said at a news conference on Friday.

He noted that the convention was signed with "a certain comment," which suggests that Lithuania will follow the principles and standards stipulated in its Constitution.

"I just signed the Istanbul Convention on behalf of the state, which is aimed at preventing violence against women. I believe it is a very important document," Linkevičius said at a news conference on Friday.

He noted that the convention has raised "certain issues among members of the public" and was signed with "a comment," which suggests that Lithuania will follow the principles and standards enshrined in its Constitution.

"Before signing (the convention – BNS), I handed in a note to the secretary general, in which I said that the Republic of Lithuania states that it will apply the convention provisions by following principles and norms enshrined in the Constitution of the Republic of Lithuania. In other words, those norms and principles which are in the Constitutions, we don't have plans to change them. And if somebody has questions about the change of the family concept or other things, I think, this statement answers all questions," the minister said.

Asked about the prospects of ratification of the convention in the Seimas, Linkevičius said: "I think they are good."

"I hope we'll manage (to convince Seimas members to back it – BNS) as I don't see any reason for it not to happen," Linkevičius said, noting that the convention had been signed by countries like Poland and Italy which "also have similar sensitive issues."

Asked what the social gender concept, used in the convention, means, Thorbjorn Jagland, secretary general of the Council of Europe, who also attended the press conference, said: "It represents the reality in society."

"You can go in the street and you will find different kinds of people. That's the reality which we are facing in Europe today. We have all decided that now it has become clear for all of us and we recognize it. We cannot look away from what is a fact," the secretary general said.

"Violence is not to be tolerated in any environment and under any circumstances. Lithuania has to take on international commitments to fight violence," the president told BNS through her Press Service.

One of representatives of the ruling coalition, Minister of Environment Valentinas Mazuronis told BNS on Thursday he opposed signing the convention.

"The gender issue, when we talk about five possible genders, is unacceptable for me. I was raised that way and know two genders. I had a mother, had a father, I have a sister, people have brothers. I don't know five genders and don't think it's the right attitude. Some social genders, it seems to me that renaming, reforming some things produced by the nature is unnecessary," Mazuronis told BNS.

The Lithuanian Bishops' Conference earlier called on Lithuanian leaders to not sign and ratify the convention which, in their opinion, proposes notions of gender that do not match human being's biological nature.

"Preventing violence against women and other persons is a noble and commendable goal. Unfortunately, by declaring legitimate objectives, the convention is based on an ideologized attitude to gender as a social construct, which is against a human being's biological nature. By signing and ratifying the convention, Lithuania would be forced to transpose this gender concept into our legal system," the clergy say.

Moreover, they are concerned about the document's provisions committing the signatory countries to update education programs of all levels of formal education with information on non-stereotypical gender roles.

"The latter, among other things, might also mean homosexuality and transsexuality. The attempt to link the noble goal of preventing violence with the introduction of provisions that are foreign to both the Lithuanian education system and also moral values of the majority of parents is raising legitimate concern," the letter reads.

Various public organizations have also expressed concern over the issue.

In March, Lithuanian MP Marija Aušrinė Pavilionienė turned to President Dalia Grybauskaitė asking her to take initiative for Lithuania to sign and ratify the convention. The MP then said she later received an answer from the Presidential Office, saying that the president supported the convention and would make sure it was signed soon.