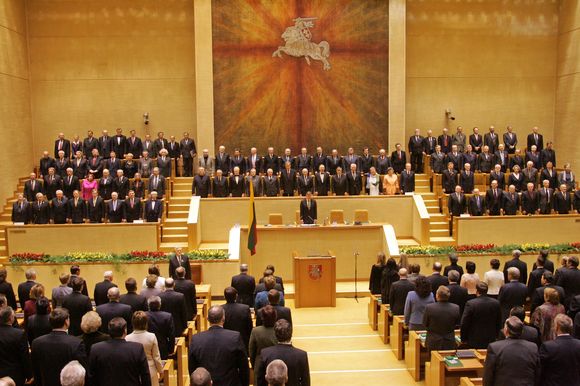 Kęstučio Vanago/BFL nuotr. / EU presidency events are planned to be held in the Parliament building.
Source: BNS
Less than a year until Lithuania's presidency over the European Union (EU), the country's parliament is getting ready for an onrush of foreign guests.

Lithuania will take over EU chairmanship on 1 July 2013, and about 3,000 guests are expected at the Seimas over the following six months. It has already been approved that all EU chairmanship-related parliamentary events would take place in the parliament building – in plenary and 11 March halls. The budget of all events is 8 million litas (EUR 2.3m), the Lietuvos Žinios daily reports.

Loreta Raulinaitytė, head of a steering group set up for the preparations of the Seimas office for the EU presidency, the parliament may have to host about two dozen various events, with about 10 so far planned for the July-December period of 2013 and two large events for the first half of 2014.

The latter – a summit of secretaries general or chancellors of EU parliaments and a conference of EU parliamentary speakers – are traditionally hosted by countries that have completed EU presidency. Nevertheless, in Raulinaitytė's words, the onrush of guests to the Seimas will start even before Lithuania takes over EU chairmanship.

Committees of the European Parliament (EP) and European Commission (EC) members are expected to visit next spring.

"A delegation of EP group elders will definitely come to the Seimas in June. Without doubt, we will receive representatives of national parliaments. Usually parliamentarians of the United Kingdom, Sweden, Denmark, and other countries do not miss the opportunity to learn about the initiatives of chairmanships," Raulinaitytė said.

The largest events, for example COSAC – Conference of Parliamentary Committees of Union Affairs of EU Parliaments – may bring together over 300 participants.