Tribune
The pandemic did not change the desire to meet in person: instead of a traditional party, a summer camp with colleagues 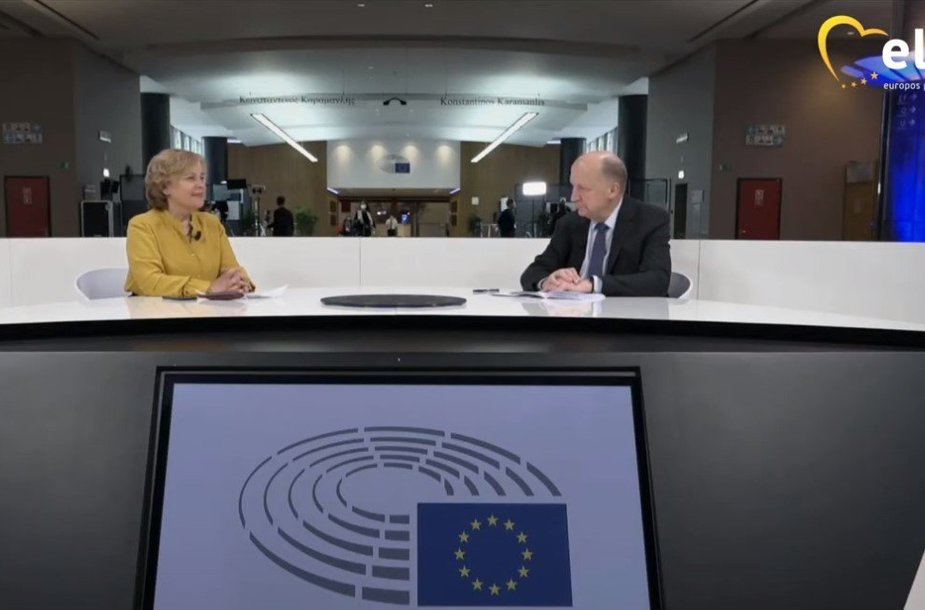 R. Juknevičienė and A. Kubilius
Source: 15min
Members of the European Parliament Andrius Kubilius and Rasa Juknevičienė reflected from Brussels on the news this week, highlighting the cabinet report and the Family March held over the weekend.

Kubilius spoke optimistically regarding the cabinet’s work with it presenting its annual report, and at the moment, “the essential things, which are proceeding positively, are of the utmost importance. You can see that the pandemic is being contained, primarily due to the very effective vaccination.”

In terms of neighbouring Russia, which is manufacturing several vaccines, it has reached a vaccination level of 10 per cent of the population, while Lithuania has reached around 30 per cent.

“I think that the heavy wave of the pandemic is diminishing. Spring is coming, the government is handling things well as is the coalition, people’s moods are improving, and the opposition is annoyed about it. I would advise both Agnė Širinskienė and Ramūnas Karbauskis to not be so angry, it leads nowhere,” says Kubilius.

MEP Juknevičienė expressed hope when discussing the improving COVID-19 pandemic situation that in autumn: “There will likely be more vaccines produced in the world than there will be that intent on getting vaccinated.”

“There will be enough for both re-vaccinations and for the rest of the world, because, despite us celebrating that 30 per cent of Lithuanians have been vaccinated, we will unfortunately not be safe until everyone is safe. We must not become complacent and think that it will be enough for us to get vaccinated in our small community in Lithuania or the European Union. Until the whole world is vaccinated, and as long as the virus continues to rampage, proliferate and mutate in places where it can do so, where there won’t be protection for people it will remain a bad situation,” the MEP says.

The MEPs also discussed the Family March held in Lithuania.

According to Juknevičienė, there is probably nobody who would be against the family unit, and questioned what does the family need defending from exactly? We are late with the discussion that is emerging now, because “when we entered the EU when we signed the Treaty of Lisbon, and when we ratified conventions and charters which protect human rights, we signed on to many other things, not just to receive funds from the EU. We also declared, confirmed it by referendum that we will comply with EU core values.”

She quoted the first section of the Treaty of Lisbon, which states: “The Union is based on the following values: respect to human dignity, freedom, democracy, equality, the rule of law and respect to human rights, including the rights of minorities.”

“We voted on this in 2004, and this is often forgotten when they say that the president organised a survey where 80 per cent of respondents were against the partnership. Hold on, there are 20 per cent whose dignity will be undermined in Lithuania because they have different wishes. Do we care about everyone in Lithuania? Just like democracy, the European Union is based in that the majority does not brusquely impose its will on those seeking a different way of life,” said Juknevičienė.

“Both the EU treaty and the Lithuanian Constitution are suitably arranged, and everything is protected for both minorities and the family unit,” Kubilius chimed in, having been outspoken for a number of years about how families need more protection by the state.

“The family is concerned with crucial aspects of life: whether young families have homes, whether the mother can return to work after maternity leave, whether she can maintain her career, and also the children’s education, whether they will have a good school and so on. […] There are families, which need certain living conditions, this has to be cared for and the state must handle it. This is where solutions should be sought out,” the MEP mused.

The Lithuanian Catholic Church has also declared a firm position on this matter. As a believer and active member of the church community, Juknevičienė raises a moral question in that when politicians approve laws, they must represent everyone and not just those whose religious and other views align with their own. The politician also spoke about how she discussed these issues with the apostolic nuncio residing in Lithuania, who agreed that politicians must heed both the Church’s position as well as a wider range of viewpoints in society.

“In politics, every single individual must be of concern,” said A. Kubilius.

There are many for whom family life does not work out and so, according to MEP Juknevičienė, less anger and more empathy is needed.

“Thou shalt love thy neighbour as thyself,” concluded the MEPs.